by Shawn Rossiter
note: this article was written before the passing of Ed Maryon; he will be greatly missed in our community

This article began as a book review. I had in mind to write something on the Ed Maryon monograph, Ed Maryon: Reflections of the Artist, recently published by his family. But, as I began flipping through the book, examining Maryon‘s works and his comments on the medium of watercolor, my mind began drifting freely through impressions of Utah watercolorists. And so I will arrive at a review of sorts, after following a couple of detours that will go as far back as my childhood, and as recently as last month’s Gallery Stroll. On route, I hope to say something about three fine Utah watercolorists. First there is Gaell Lindstrom, my father’s uncle, the first artist in my life and the visual imagination I grew up with. Secondly, Osral Allred, who is closely tied stylistically to Lindstrom and who is present on my mind due to a recent show at the Patrick Moore Gallery. And lastly, of course, Maryon, whose work I have been thinking about most recently because of the book, but whose concrete cubism has fascinated me since my first encounter. 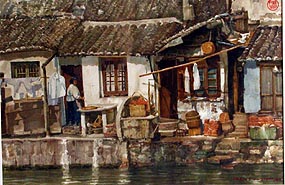 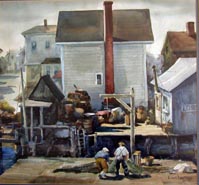 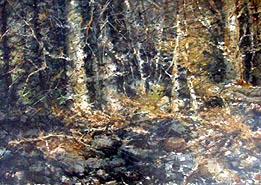 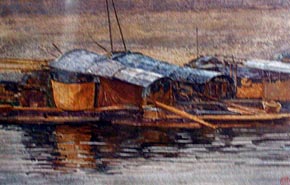 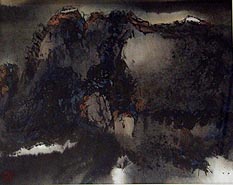 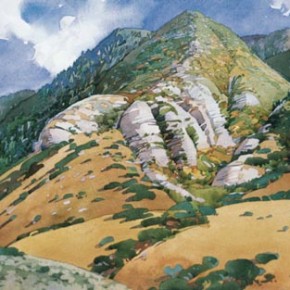 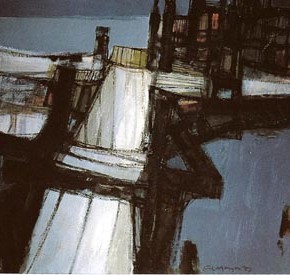 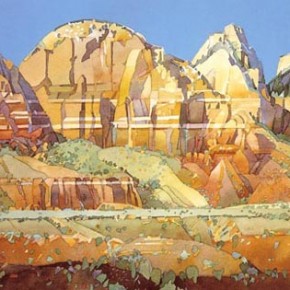 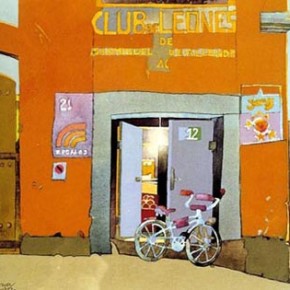 I grew up with the work of Gaell Lindstrom in my house. By the time I had graduated High School, my family had moved five different times. Each house became our house when the artwork was finally put up. And by and large, the artwork that went up was Gaell’s. The first ones were a couple of wharf scenes from the 1950s, paintings I think Gaell didn’t feel were satisfactory but which he let an uncle of ours take out of his studio (2). We also had a large forest scene, in umbers and ochres, that resembled a Jackson Pollock drip painting (3). As I grew up, we acquired others — either as gifts from my grandmother or outright purchases — a “junk” painting from Gaell’s time in Hong Kong (4), a scene from Guatemala, a storefront in an old mining town. Visits to my grandmother’s house in the summer gave me glimpses at more of his work — dark skies over deserted homes in Montana mining country and even a few early redrock paintings. When, now living in my own home, I was able to scrap together enough money, I bought my own piece by Gaell — one from a series of ink wash paintings, inspired by time in Taiwan and China. The works are done on tissue-thin paper and is a process of developing a somewhat referential space — a mountain in this case — from a lucky accident of ink on paper (5).

A few years ago, as I was just beginning to take my life in art seriously, I spent a few days at Gaell’s home outside of Hurricane. We drove down across the Arizona border to the Marble Canyon, home to a couple of California Condors, Lee’s Ferry, and an amazing combination of white dunes, red rock cliffs, and ultramarine shadows. An eager storyteller, Gaell kept the conversation going the whole time with remembrances of his early painting days — classes with George Dibble, a cross country painting trip with LeConte Stewart. When he first started studying watercolor, he recalled to me, he was told all kinds of things that he couldn’t do. Watercolor was about limitations. You had to paint light and you had to use a certain palette. He was told, for instance, that there was no way one could mix two dark colors like Prussian Blue and Burnt Umber. So that is precisely what Gaell set out to do. And did it masterfully. An award-winning watercolor of his hangs in his front room. It is fairly monochromatic — some old white home fronts with velvety dark shadows and skies. I’m pretty sure it’s a watercolor constructed around the possibility of mixing Prussian Blue and Burnt Umber. Much of his work has been created in that same dark vein and is what I believe sets him apart from many other watercolorists.

Except for Osral Allred, that is. Allred studied with Gaell and the relationship is unmistakable. Allred uses the same dark, rich palette, pushing the depth of his color in a granulated fashion. At the recent show at the Patrick Moore Gallery, I was struck by a stunning painting of the back of a boat on a shaded lake. With washes and dots of color, Allred had created a very still, very dark negative space that wrapped itself around the fairly simple forms of the back end of two motorboats.

I like Allred best when he paints old farm machinery or an abandoned locomotive. The textures and colors he achieves makes one think he is painting with rust itself. He seems often to work from the center, detailing the prop on a speedboat or some other feature, and then fading into non-referential washes or negative white spaces towards the edges of his pieces. The effect is compelling and has an oriental feel to it. Allred has no problem letting the color spread out on the paper, filling a space without detail or description. He alternates this method with areas of detail and texture.

But both of these artists really have nothing to do with Ed Maryon. They are just the diversion of a wandering mind. If anything, Allred and Lindstrom serve as a contrast to the work of Maryon, who paints light, flat and in a very controlled manner.

But that’s just it. If someone were to describe to me the work of Ed Maryon, I would be sure that I wouldn’t like it. But I do.

Lindstrom and Allred love the dark moody places, the run down and rusted out. They delight in the scrumble of the watercolor across a surface. They love to let the brush show. But Maryon effaces the brush. He constructs his paintings, minutely. Tightness usually bores me. But what amazes me about Maryon is no matter how gridlike, composed, and thoroughly thought-out his paintings are, they remain fresh. It frustrates me to no end. Because I can’t see how he does it.

The recent monograph of his work, 96 pages with 80 color reproductions, provided me ample material to search for his secret. The book provides just enough biography to take someone along through the progression of Maryon’s work, highlighting his early years in California and the lasting impression it had on his subject matter; his years as an instructor at the University of Utah; and the development of his mature style. I found particularly appealing the many quotes — from Maryon himself and from colleagues and art writers — sprinkled throughout the book. It was one of these comments that led me to thinking about Gaell Lindstrom and took me down the detours that kept us from our initial subject.

f you are familiar with Maryon’s work, most of the images in Ed Maryon: Reflections of the Artist will seem recognizable. But a few fresh suprises are in there to discover in the fifty year career of the artist. The images from the fifties, his student days, are fairly straightforward watercolors: scenes of wharfs, railroad tracks, and city corners in slightly muted umbers and ochres. The sixties and early seventies are covered in just a couple of pages;but the works are certainly a surprise, a move in an abstract direction, influenced, as Maryon notes, by Doug Snow. Sausalito (7) is an imaginative balance of the wharf scenes Maryon was painting a decade before and the abstracts he would have seen Snow producing during this time. Other abstracts produced in the early seventies take on a harder edge, looking more like the late work of Don Olson.

At the same time, apparently, Maryon was experimenting with the “cubist” style that he would develop for the rest of his life. In these works, reminiscent somewhat of Stuart Davis, the paintings are laid out in blocks of flat color laid across the surface in intersecting planes. The subject matter remains the same: the California coast, fruit stands, old cars.

By the eighties, Maryon’s work had completely shed itself of the muted tones of his earlier work, concentrating on scenes of bright days, cast shadows, and an adroit interplay of light, color and form (8). With some deviations, this seems to be the style that has engaged him for the past twenty years. He is able to capture a wide range of subject matter with this style. There is not a great deal of watercolor effects in his works — not the splashes of Allred or the scrumbling of Lindstrom. Things are often laid out in hard edge lines like his abstract pieces of the seventies. Everything becomes faceted. All of this creates a strong sense of dimension, despite his even washes and relatively slight modelling.

His storefront pieces (a subject he shares with Lindstrom and Allred — so there are some similarities) lose this dimensional quality and tend to be my least favorite. Still, his eye captures some masterful designs and some gorgeous color combinations, as in Club Leones, San Miguel (9).

I could go page by page dissecting Maryon’s work, but I’m not sure that I would come to a satisfactory conclusion. I feel almost as if he is tricking me. I get the “feeling” that the paint is doing more than it seems to be doing on closer inspection. Maryon’s watercolors have an indescribable quality about them. The freshness in design, in color, and in line keeps a very controlled and flatly painted watercolor from being boring. Far from it. The works are elegies to structure and grace.

These three Utah men of watercolor each appeal in their own way to my eclectic tastes. They have stretched the possibilities of their medium in such a way to make it stand the equal of its more opaque colleagues. Sadly, these artists are not exactly in their youth (though Allred, who with a show coming up at the Eccles Community Art Center will have had two large exhibitions within a month of each other, certainly doesn’t act like it). They have left a great legacy in the state. But as I consider the three artists, I stop to ask myself, where is the next generation? Are their equals working now in the state? . . . But that would be the subject for a later detour.