The Long-Awaited Sequel to “The Dictionary” 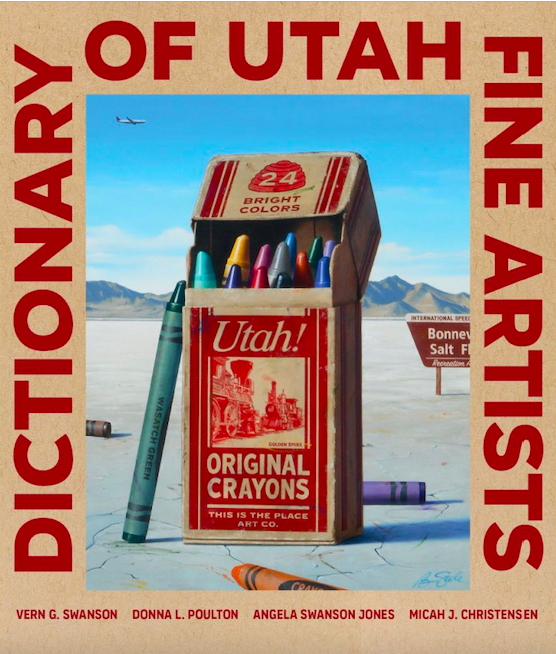 They all matter, of course.

Not being an artist himself, my friend didn’t grok the immense value of this dictionary to art historians, art critics, art professors (and their students), artists included in the book (and their mothers), artists interested in their field, art lovers who frequent estate sales and wonder what they’ve scored: “Hmmm, what do I have here?”

This is a sumptuous coffee-table-size book, and surprisingly contemporary as these tomes typically go: Chapters are divided into their own delightfully individual color schemes making references easy; the jacket features a captivating 2020 Ben Steele work (You likely know the one — a bright box of Utah! Original Crayons perched out on the Bonneville Salt Flats, a jet cruising by in the sky) but beneath that richly hued dust jacket, the naked hardcover book itself is an overall blah red.

Otherwise, one can bring out ALL the adjectives and use them unabashedly: “eagerly anticipated,” “important,” even “essential.” If you have an artist on your Advent list (yeah, I ran real late with this review) and they’ve been very, very good, you might want to see if s/he made it into the book and buy it for them.

Because for most artists it’s pricey — hey, at 80 bucks, it’s pricey for most anyone. And though valuable and highly educational — not to mention entertaining: I could spend all night cross-referencing my way through this thing, and I have, many times — but it’s still an unwieldy tome, weighing 8 to 9 pounds, measuring 13”x11”x1½” (decidedly not a lap book); but it beautifully “details the styles and experiences of over 4,500 fine artists from the sketches of early exploration artists to Robert Smithson’s world-famous Spiral Jetty to the Western images of Minerva Teichert,” according to the usually reliable publisher, Gibbs Smith.

Which also writes of the contents: “This sweeping work highlights the rural and the cosmopolitan, the traditional and the modern, and the concrete and the transcendent that encompass Utah art.” (There is rather a lot of the transcendent, but then This Is the Place for that.) 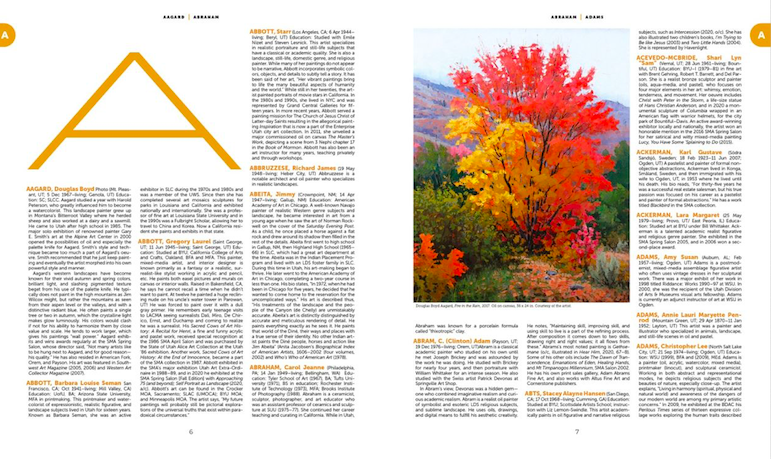 The book opens with wistful side-by-side tributes to the popular and respected late publisher Gibbs Smith, himself, and to the also very-much-missed Dean Robert S. Olpin, who created the first, brief but brilliant iteration of this survey, a paperback he gave me years ago that I can’t immediately locate (which really ticks me off).

While I enjoyed this most recent rendition, I don’t trust it.

It’s not just that Randall is spelled in a puzzling variety of ways with reference to Randall Lake, the well-respected Spring City/Salt Lake City artist, but that in checking with a couple of other included artists each found errors in their biographies in the text.

The delightful multi-media artist Steve Dayton was surprised to find that “he was heavily influenced by Kent Wing,” a well-known artist Dayton is entirely unacquainted with. He also learned in the book that his degree was in art, when he clearly recalls graduating in graphic design.

A modicum of the book budget might have gone toward hiring a visual art professional to fact check the text and thereby avoid some of the more obvious errors.

But, as Frank McEntire points out, we are fortunate to have people interested in writing about Utah artists at all; I would add people of such caliber as these (biographies courtesy Gibbs Smith):

Vern Swanson studied at BYU and the U and received his doctorate from the Courtauld Institute of Art, University of London. He was director of the Springville Museum of Art for 32 years, retiring in 2012. Publications include J.W. Godward: The Eclipse of Classicism, two books on Sir Lawrence Alma-Tadema, five on Russian and Soviet art, and five books on Utah painting and sculpture. He lives in Springville.

Donna L. Poulton, a Montana native, lived in Germany for 12 years before earning her doctorate at BYU. She was curator of Art of Utah and the American West at the UMFA for 8 years and works privately as a fine art consultant. She previously wrote Reuben Kirkham: Pioneer Artist and coauthored: LeConte Stewart: Masterworks; Painters of Utah’s Canyons and Deserts, and Painters of Grand Teton National Park. Poulton lives in Salt Lake City.

Angela Swanson Jones, Vern Swanson’s daughter and a graduate of BYU, holds a master’s from the Courtauld Institute of Art, University of London. She is writing a biography and catalogue raisonné on Heinrich Hofmann (1824–1911), has published essays and articles with Fine Art Connoisseur and is co-author of Desperately Young: Artists who Died in their Twenties. After living in Europe for a decade, Swanson Jones now resides near Dallas.

Dr. Micah J. Christensen, PhD, earned his doctorate in the History of Art from University College London, where he traveled extensively to study how artists were trained in the eighteenth and nineteenth centuries. He received his MFA from Sotheby’s Institute (London). He has lectured at the British Library and the University of Cambridge, and is currently a partner at Anthony’s Fine Art & Antiques (Salt Lake City) and a Board Member of the Springville Museum of Art. He regularly lectures, writes, and consults with public institutions and private collectors. He lives near Salt Lake City, UT.