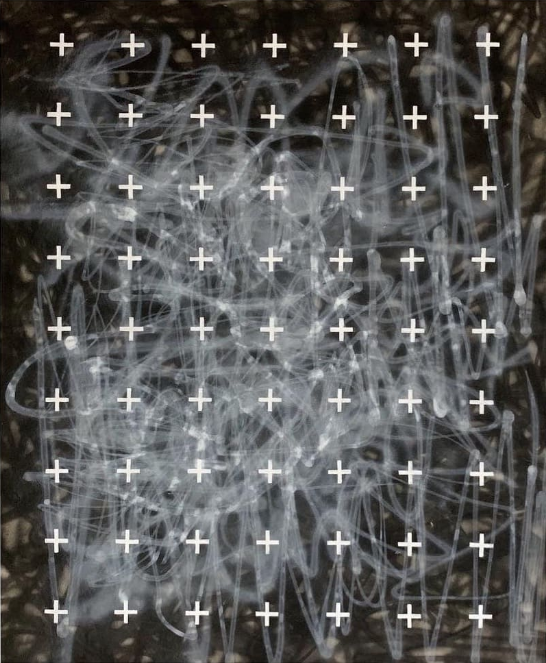 Crosses, again and again, appear in most of these paintings by just-returned-from-Chicago Art Institute Navajo artist Patrick Dean Hubbell. They’re referencing stars, say Modern West gallery assistants. Stars, they point out, appear again and again in Hubbell’s titles. But every small cross, and every large cross, in these paintings, is in a row: arranged as rigidly as institutional/military graves, military troops on display, the terribly starchy-straight stars of an American flag. Or every one the same size, as if jailed by pane of glass, separated from the distances of the beyond. Whether painted thin-brushed, with a slight wobble, or chunkily, like sturdy Red Cross symbols, wherever they appear, they appear in relentless repetition — not one bit of the miraculous, sudden-birth, eventual-death, falling-into-distance placement of real stars.

In Navajo lore, as expressed by Navajo rugs, textiles, and perhaps Hubbell’s paintings, too, whenever any cross-shape appears, it’s homage to Spider Woman (in some other tribes’ lore, Spider Grandmother). Spider Woman seeks good, helps find beauty. She teaches patterns. Patterns lead to beauty. She teaches weaving, teaches the planting of crops. She’s moon goddess. Some think she helped birth the sun and moon. She’s protector and helper of humans; she can whisper advice in your ear to help win a race. She can teach you how to avoid trickery, avoid your enemies. She will punish bad children.  She teaches the roles of men and women. She helps you rise from a first level to a fourth level of existence, helping you to become more and more human, as you rise. If there is a fire, she can, some say, spread her web over your village; if you dampen her web, your village will then be protected from fire. If you believe, as the Navajos have, that you come from sun rays, and are delivered to earth via lightning bolts – she it is who helps you adapt to life on Earth.

At one time in Navajo rugs, borders began to appear: buyers of Navajo rugs wanted borders. At first, Navajo weavers resisted the addition of borders: they believed a border could entrap the creative soul of the weaver. There are similar weaver-taboos about placing the cross, symbol of Spider Woman, within another shape, within a diamond or a triangle or a square: because this would symbolically entrap Spider Woman. In Hubbell’s paintings, no crosses are contained, trapped. They free-float, above. And in Hubbell’s work (paintings, not rugs, but in most of these, there is rug-like repetition of elements, and canvas is fabric) you will not find borders, except as occurring through/by cessation of pattern: in other words, where the cross-marks cease is the margin, or border (as in the eye-marshaling “Star Portal”). 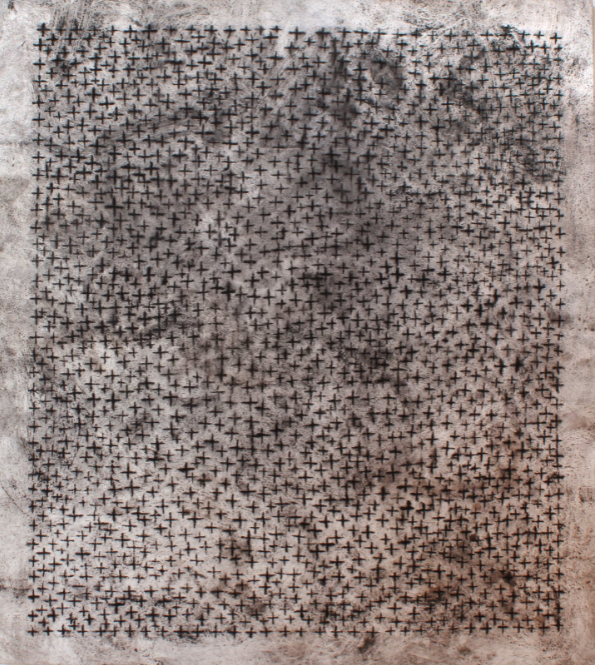 Hubbell’s paintings, post-Chicago, are even more somber than pre-Chicago: they are mostly ashen gray, with flecks, speckles, or scrapes of white; and recurring panels and marks of black. In his work of a few years ago, there were many galloping horses, represented in warm browns, through energetic gestural drawings/markings. These same galloping marks continue, now, though not as horses. Sometimes (“You Balance All from the Earth to the Sky,” “Earth Gestural Movement”) these marks are a dark, almost glowing-mineral black; at other times a ghost-white, which looks almost like the ghost-soul of neon (“Night Spirit Gesture,” “Star Movement”).

Hubbell makes inventive use of raw pine canvas stretchers, which he has stained a darker color. They attend and support “Nightsky Star Protection,” “Your Natural Healing Movement,” and “Sunset Star Movement.” At first, you do not recognize them as stretchers. Stretchers — usually never seen, except at the back of paintings — are as important for artists as the intricate rigging backstage for sets for theater or the rigging on boats, for sails. Stretchers, in war, carry the wounded and dying away from battlefield, for care; in paintings, they carry the wounded souls of artists forward. Just as they harness wind over water, for travel, stretchers allow projection of human thoughts, dreams, despairs, for painters. Here, Hubbell has placed folded pieces of painted canvas, as if hanging a folded towel over a rack, over middle bars of rectangular sets of stretchers. A simple, insistent insistence — giving stretchers a sunlit, inventive use, but even more, the artist’s insistence his work is as worthwhile, as sacred, folded, casually draped across a bar, as stretched flat and broad, more conventionally, across hidden stretchers. Stretchers are still valet: a skeletal framework waiting, to hold, present, what an artist has done; but they underline here that paintings, in a way, are a ceremonial garment, to be worn by the brain. 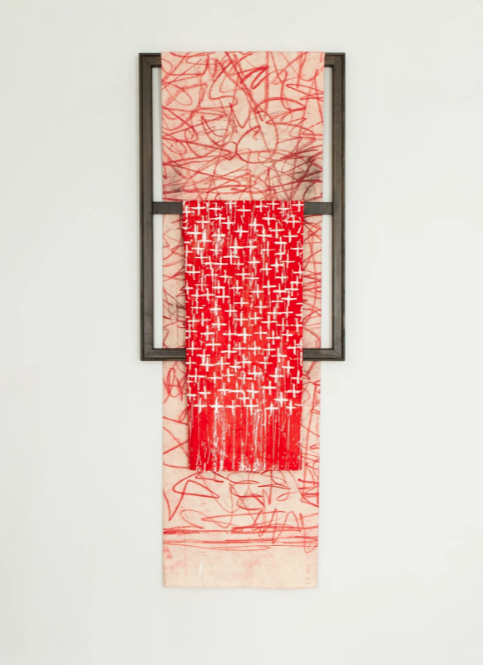 Hubbell’s work is a friend of sculpture. In one corner of Modern West, where Hubbell’s “You Have Provided the First Light” hangs near Day Christenson’s cast bronze tree trunks, missing their tree-tops (“Windbreak III”), the repeating gentle horizontal striations in Hubbell’s painting are like horizontal lines in tree bark, or gentle undulations of water. Criss-crossing over these striations, or water-marks, Hubbell has made scissoring, repeating, outlines of unfooted triangles: the impression is of rapidly-moving lightning illuminating intermingled forest and streams. And “Sunset Star Movement,” with its large amount of flat red, and small bit of mountain-wildflower-pink, nestles well beside Dick Jemison’s almost totemic pieces, “Ancestor VII,” “Ancestor XXV,” tall as giant black bears, but looking like many-legged chairs clambering, balancing, atop each other. Sun rays, passing through Modern West’s dark-paned windows, casts bracketed light and shadow over all.

So, the Navajo believe they come from sun’s rays, and were delivered to this earth via lightning. If stars, are these rigidly-lined-up stars or same-size stars, as if all released from the same egg sac, in Hubbell’s paintings, crying out in protest? Forming a new republic of stars? An increasing gathering of wisdom, forces, power: a calling on the stars (or Spider Woman) for assistance, through these very paintings? These arguments – what kind of stars are these, if they are stars? Good or bad omens, symbols? – charges these paintings with emotion, hope, declaration of solvency or insolvency, sovereign or unsovereign territory. Hubbell, who calls his work “rooted in the correlation and the conflict of my Native American and contemporary mindsets” has his work, as they say, cut out for him. 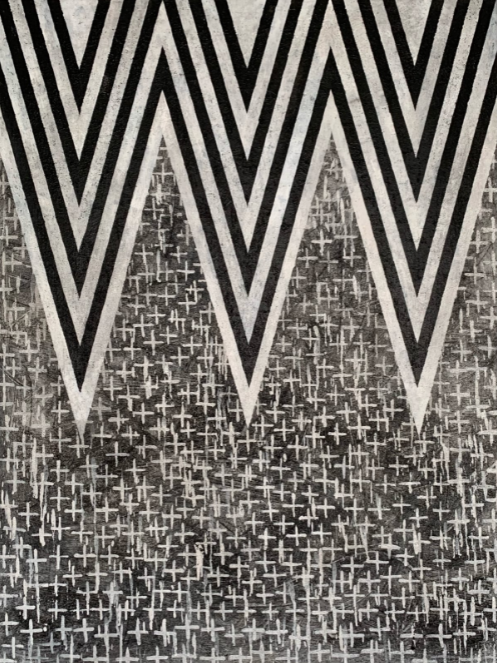 There’s tension, too, in the ground-earth pigments Hubbell has collected, used in his paintings, and the leftovers of which he has encased neatly and displayed beside some of his works (they will go with the painting when purchased). Tension, because of their surprisingly modern encasement: they’re in small, clear, circlets of plastic. Once, your brain tells you, these surely would have been in earthenware pots. Yet, what better way to see them? Here, now, in plastic clear as new rocket-ship windows, letting you see them fully, their silky textures and earthy colors? And to ensure they can’t spill, be lost? But this simple plastic encasement reminds you, too, of a child’s paintbox, in some ways, underlining that strange and special preserve of innocence all good artists must have.

Is there possible tension, too, in a title like “Your Natural Healing Movement?” Or it could be a title as straight and pure –as starlight. Only the artist knows, and that’s part of the lightning-power of these paintings and their titles. Hubbell keeps us floating between stars, Earth, and sacred lore, and his intents. In “Your Glowing Presence Leads Me,” the black, gestural marks by the artist are, from across the gallery, thick as a pile of dark barbed-wire fencing, torn down, thrown in a pile. Above, float crosses, black but surrounded evenly by white, and then outlined again by red. Order, the crosses seem to intone, insist: please, return to order — expressing individual despair, or collective/cultural despair? Hubbell keeps us guessing. One of the most interesting paintings here, “Untitled Reclamation,” is small, compared to others. But it has emotive, almost sloppy daring; including what look like scribbling-outs, starting over; but the starting-over marks atop the scribbles seem marred and uncertain, as if they, too, are doomed to soon be scribbled out, and the scribbler knows it. At the base of the painting are unmistakable fringe/tassel shapes: this is a rug by a torn and tormented weaver, someone who wants to weave true. 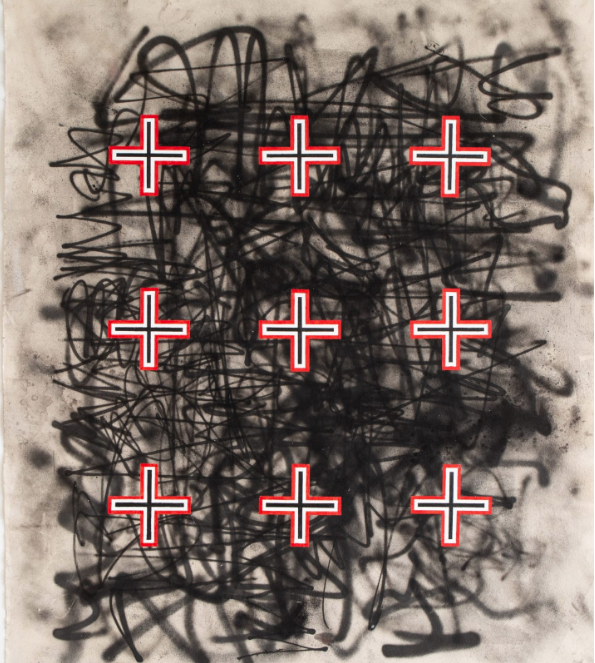 All of this work is elegant, ethereal, emotional. But abstract paintings can also serve as masks, for a painter: sometimes too much of a shield from the world. And Hubbell’s paintings of human figures, of a few years ago, disparate as they might be in a show like this, are missed; you hope they, by Hubbell, can return, joining these abstracts. Even just one self-portrait of a Native American Spider Man (this artist, Hubbell) would suffice: a portrait of one persistent, artistic hero, reporting as best he can to stars, sun, lightning bolts, and good godmother.

From the Earth to the Sky, Modern West Fine Art, Salt Lake City, through Nov. 19.