The Life and Art of Ruby Chacon 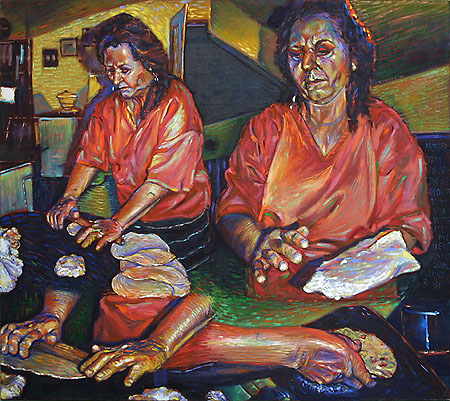 Recently, with the opening of a new gallery on the West side, Mestizo, a group of artists and poets have come out of the woodwork bringing a new vision to Salt Lake City filled with vibrant colors and a South of the border flavor. One of the people spearheading this movement is local artist Ruby Chacón. I met with her for a few hours at her new gallery on 5th West and 2nd South. As Buena Vista Social Club played on the radio in the background, we drank coffee and spoke about her inspiration and the roots of her artistic vision.

Ruby Chacón’s art career began long before University. As a child, she had a fascination for painting and drawing. It was her way of escaping and entertaining herself. When there were problems in her life, during the pre-internet and pre-PlayStation days, she turned to coloring. Late at night, hidden in some corner of her mother’s small house, among the noise of ranchera music, television, and several rowdy kids she found solace in drawing pictures of La Loquita from lowrider magazine. “I loved to draw her,” she says, “They were the only pictures I could find of people who looked like me and my brothers and sisters. They were beautiful to me.” These late nights with crayons led her to win coloring contests that brought home prizes such as a Christmas turkey from the local grocery store. She was a natural. She saw the world in lines, shapes, and shades of color. However, the art world, she felt, didn’t belong to her. It seemed a place for “those” people from “other” neighborhoods, from “other” experiences. 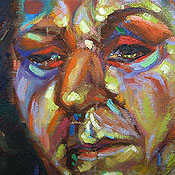 There have been many studies that indicate at-risk children do better in school and life when they are exposed to art in their education. Ruby definitely fit into the definition of “at-risk” but her early art education didn’t come from schools or early intervention programs; it came from her uncle. He lived in an abandoned house on the West side of town. Whenever he had money he spent it on paints. When Ruby went to his house she was able to paint freely on the walls. He was her first art teacher. “He didn’t teach me techniques, that came much later in life, but he taught me to be free with it. He gave me the stamp that said it was OK to do what I was doing. I mean … he wasn’t the best role model. In fact, he died of pneumonia in that house. But people change your life often without knowing it, and I guess it was like that. I think, that if I hadn’t been exposed to art, early on, I would have found other ways of expressing myself, the way many people I knew did. It wouldn’t be too far to say that painting and drawing protected me.” Chacón used art as a hobby, as a way of entertaining herself, but the idea of a career didn’t occur to her until much later.

Chacón had taken art classes and music classes in school. She excelled in these areas, but still there was a mental barrier that seemed insurmountable, “not only art, but education in general seemed out of my reach. Whether it is true or not, there were times that I didn’t feel welcome. I felt often that I was discouraged by my counselor. One told me that I couldn’t graduate and I should just give up. I know it sounds ludicrous and blatant. But remember, the “Latin invasion” only began ten to fifteen years ago. There have been a lot of changes in the last fifteen years in this state. It’s easy to turn away from people who don’t like you though, the hardest part was that I didn’t see others like me doing things like that. I couldn’t see myself as a paid artist, musician, whatever. The people I knew were cleaning houses, hospitals, and shopping malls. That seemed to be the choice available to us.” It wasn’t until she finally graduated and traveled to Santa Barbara that she began to see the world in different light. All over the campus she saw teachers and students who were Latinos succeeding in a variety of different roles. “It was an eye-opening experience. The counselor was helpful. He was kind. They helped me register, I felt that for the first time I was being counseled.” 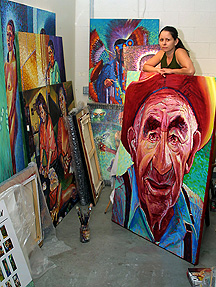 Chacón came back to Utah to finish her last years of college. It was then she decided to pursue art as a career and transferred, after a couple of semesters at the Community College, to the University of Utah art program. Carrying an old-world work ethic certainly helped, she insists. She fully committed to painting and drawing. While in the art department she took a class in Chicano Studies. There she became further opened to the experience she felt in Santa Barbara. She took off to visit with her grandparents, to learn her history, to learn where she came from. “It was amazing. I learned so many things. I learned that we were from here. That was a surprise. I learned that mi abuelo (my grandpa) was a sheepherder and a poet. His brother was a sheepherder and an artist. I learned that there was this artistic seed running through my family, that I wasn’t the first, but I was in a long line of artists, musicians, poets, etcetera. I wondered why none of my family knew that. We had been told a bogus story about who we were … and I believed it! I wanted everyone to see my family, not the way they were portrayed by other people, but the way I had seen them. I guess that was why I painted them so much. It was a way of looking at them close, then having others look at them, hanging on the walls of galleries. It was important to me.”

Chacón’s family became the primary focus of her work. She painted her mother, her nieces and nephews, her grandfather, her son. “These were the subjects that interested me most. So I painted them.” In doing so, she has received tremendous recognition across the Southwest in Utah, New Mexico, and California for her large (sometimes oversize) figures. Her brilliance is in its simplicity. It is not shocking, didactic, or pretentious. It is simply a long honest look at a person’s face, or gesture. In doing so, she captures an essence of humanity on canvas. It feels as if the person on canvas may speak at any moment, or perhaps you have recently passed them on the street. Despite her colorful impressionistic style, the figure on canvas feels real. 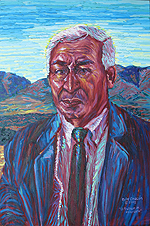 Though her family has become the subject of her work, she insists that it is not ethnic art. “I am not going to complain about being Chicana or Mexicana, or any of the experiences that come with that, good or bad. Wherever you go in the world there are ignorant people. That is a fact of life. I am deeply proud of who I am, my roots. I love ranchera music, homemade tortillas; I love to hear my mother call me Jita. I have a fascination with lowriders. I have a fascination with our struggle in America. The fact that I paint these people that doesn’t make me an Ethnic artist, meaning nonwhite, it simply means that I paint what moves me, what I know. There have been people that suggest I should “step away from the ethnic thing” which is ridiculous. No one would ever try to take the American Diner from Hopper, or American pop culture from Andy Warhol, the flag from Jasper Johns. So why should I have to give up lowriders or my grandfather in order to fit into other people’s idea of what an artist should be? Even so, her art has taken a turn down other roads, “You tell a story, again and again and again. Many people have asked me these things, these same questions, and after a while, you just want to talk about something else. Painting is like that. Now it may be my family that I want to paint, but tomorrow nudes, then next year maybe American pop culture. If that is what interests me then that is what I will paint, and (she laughs) who knows, maybe I’ll even fall in love with the landscapes everyone tells me I should paint.”

Chacón’s studies have taken her to Central America. She has spent time in Mexico studying the great muralist movement, and the Mexican Renaissance. Chacón’s work has been exhibited in Tokyo and London and she is now preparing for a couple of upcoming shows. Recently, she opened The Mestizo Gallery on the West Side exhibiting her own works along with several other local and international artists. AHA magazine has called her the hidden jewel of the Southwest. This September her work can be seen in a joint exhibition with another local favorite Guillermo Colmenero. For those interested Chacón can be contacted at Mestizo Gallery, 511 West 2oo South #125, Salt Lake City, Utah. 801-519-ARTE or email at Rubychacón@yahoo.com or Ruby@mestizogallery.com.

This article appeared in the July 2002 edition of 15 Bytes.