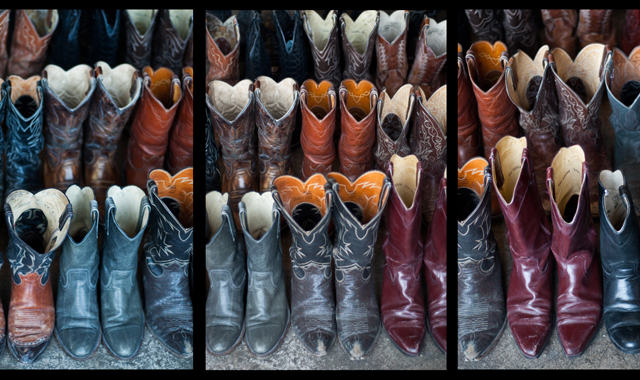 Over the past seven years Cooper has collected twenty-five pairs of used cowboy boots. By buying used Cooper keeps her environmental impact low, but that doesn’t explain the “obsession” that began with a single pair of boots. “When I bought my first pair, I felt more confident when I wore them. It was almost like the person who had them before me left a part of themselves within the boot.” Each pair of boots represents a unique personality and history, albeit unknown, that Cooper finds particularly intriguing. Wearing each pair of her boots, Cooper has felt attached to the previous owner while also knowing that she is simultaneously expanding the story of the boots, the human story. This concept, that by walking in someone else’s shoes—literally–your experience becomes an extension of another person’s vis-à-vis the boots themselves, has given birth to Cooper’s current endeavor, The Heel Toe Project . . .

Find out about The Heel Toe Project and what will happen to Shalee Cooper’s cowboy boots in the September 2011 edition of 15 Bytes.