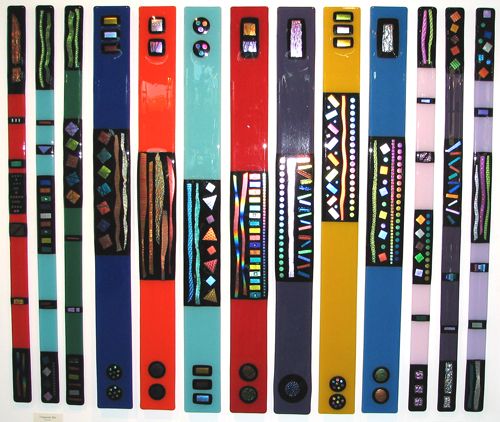 Glass is unique among the mediums of art for being identified not with a technique or a format but with a material. A glass artist may think of herself as a painter if she focuses on the decoration of two-dimensional surfaces, or a sculptor if she arranges three-dimensional forms in space, but those who paint on canvas or carve marble will not regard her as akin to either of them; they will say she is a glass artist no matter whether she blows vessels, assembles windows, or enamels, carves, or melts and fuses her works.

This special category for glass is a holdover from its days as a craft. So, too, are many of the categories of objects and some of the applications that can be seen among the works currently on display at Patrick Moore Gallery. Also characteristic of glass are periodic group shows, sponsored here by the Glass Art Guild of Utah, that celebrate not only the diversity and novelty of glass as an art, but the sense of solidarity among the artists and artisans who make up the glass community. The atmosphere at the June 16 opening was heady with an almost religious enthusiasm that more mainstream audiences would not permit themselves to display. I spoke to one couple that, having moved to Salt Lake from Houston in search of a better climate, sought out the Glass Art Guild the same way one might hook up with a club of fellow sports or gardening enthusiasts. I can’t imagine building a lifestyle around a shared appreciation for the Spiral Jetty or the architectural team that designed Salt Lake City’s new main library—though I consider both masterworks of art—yet that is exactly what many glass art enthusiasts do. 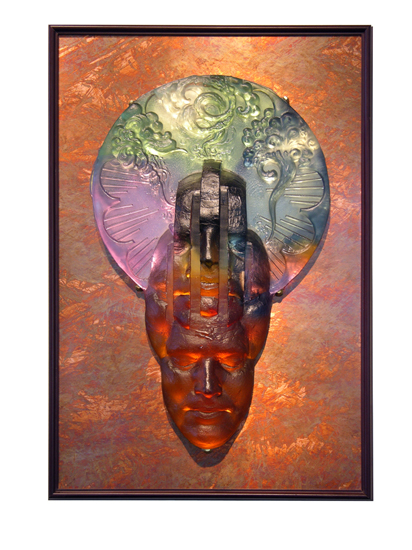 The first thing that becomes apparent on entering the gallery’s entirely glass walled space is the diversity of expressive and decorative uses. This is true even though the Glass Art Guild is showing neither of the two historically most popular glass-working techniques. Until about a hundred years ago, glass was so difficult to work that only industrial facilities staffed by specialized artisans could craft it. Then, in the early 1900s, a few individual artists attempted both blown and stained glass. Neither caught on until the 1960s, when technological breakthroughs put essential parts of both arts in the hands of individuals with vision. In the ‘70s it seemed realistic to think that glass would be the signature art of the end of the century. But it didn’t happen. Stained glass proved unsuitable to the rigors of gallery exhibition, and faded from the scene after 1980. Because of its performance appeal, glass blowing continues to draw an audience long after it used up its meager expressive means — how many ways can you say “goblet?” — and promoters turned to large-scale public ornaments and private luxury ware. In Seattle, leading glass blowers are now struggling in court over control of the declining market.

The one piece of good news is that the manufacturers who supply the trade with raw sheets of colored glass saw the handwriting on the wall in the ‘80s and set about augmenting their traditional product with something new: an entire catalog of glass products that can be fused together in a kiln, with the full range of color, translucency, and luminous effects captured permanently in the finished work. To have glass that could be reconfigured in the studio as easily as painters juxtapose and layer paint or sculptors mold and weld objects was the fulfillment of an ancient dream; and though adaptable to use in stained- and blown glass, these materials quickly gave rise to their own distinct mediums, which make up the work that is on display in Patrick Moore Gallery. 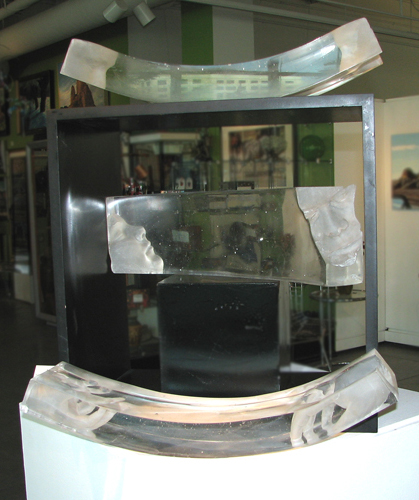 In this exhibit, some 30 artists represent themselves with about 250 objects. Under this burden, the subtler forms of criticism must first yield to some sorting. The role of gatekeeper is neither popular nor satisfying. There is no form of kiln-worked glass that lacks its fans, and someone will always be offended by the arbitrary exclusion of anything. So what if clocks, lamps, vases, and even furniture, all covered in colored glass marquetry, seem more like interior décor than art to some viewers? They may still be beautiful. So this is one person’s overview: me pointing out the irises while overlooking the rest of the garden.

After the diversity of objects, the second thing I noticed was that the appreciation of Nature, which powered much of the artistic energy of the ‘60s, remains as vital in glass as in other Utah arts. Piece after piece strives to recall the wilderness into our domesticated lives. In Jack Bowman’s bas-relief, “Sunset on a Distant World,” for example, a fiery sun of fused glass is bisected by a tree-clad horizon of welded steel. The vista reminds us that the sun is only concealed, not devoured, by the mass of the earth, and that the horizon is an optical illusion that depends on the viewer’s point of view.

In fused glass, scale is limited as much by the size of kiln as by such practical limits as weight and fragility. Large works are made of several pieces mounted next to each other. The title of one such wall-size ensemble, Laurie Burns’ “Popsicles,” fails to convey the optical feast she actually presents. Here is an extensive primer of the opulent visual effects fusing can produce. Like a Renaissance painter, Burns builds her surface in translucent layers, giving the result not just of the illusion of depth, but actual internal space within which can be found textures that shift color as the eye plays into and over them. Although a purpose beyond optical pleasure remains elusive, the work’s sensual pleasure promises to unfold endlessly in the viewer’s eye.

A hope for glass expressed by critics is that it will gradually lose its solitary position and become a common component in mainstream art. One Guild member who may feel this way is Dan Cummings, who seems more interested in the ability of glass to capture human physiognomy than in its pure spectacle. “King Dan,” another wall piece, presents a life-size mask cast from a human head, perhaps a self-portrait, wearing a crown made up of alternating segments of itself and an enigmatic sphere on which arcane symbols pulse through evanescent clouds of color. This king of both ideas and feelings is in every way a self-made man. Nearby, Kerry Transtrum’s three “Life Beams” also capture expressions of the body, especially the eyes and hands, but do so using negative space: here the surrounding air seems frozen into clear glass, while the voids left on its periphery materialize the missing features and their gestures. 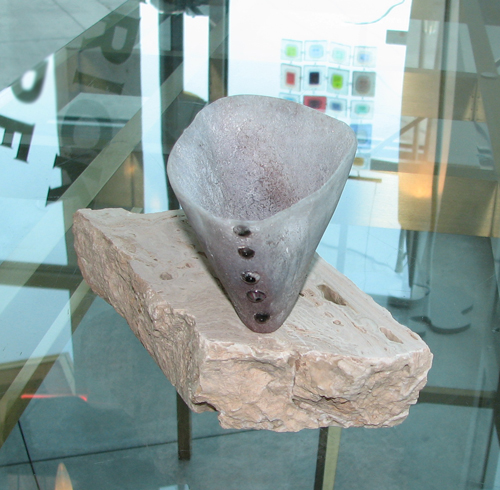 One of the more enigmatic and complex works is Mike Green’s “Rainbow Body,” assembled from 55 cross-sectional slices of thick plate glass stacked like vertebrae. Laid on its back, the figure recalls an Egyptian sarcophagus one moment, the next suggesting those three-dimensional computer mockups of the body depicted in 2-D on the Shroud of Turin. The title comes from shards of colored glass beneath the body, which is illuminated by an electric light in the hammered copper bier on which it lies. If the body is dead, why is it filled with a seemingly spiritual light? Perhaps it only sleeps, and dreams render visible the otherwise imperceptible.

Everyone is entitled to favorites. The couple from Houston spoke to me because I was perusing Christine Kende’s delicate pâte-de-verre vessel, “Geode on a Travertine Base.” Many jewel-like effects come out of the kiln, so one of its most popular uses is personal adornment. Like the giant chandeliers of Dale Chihuly, Anne Timpson’s fabulous, elaborate necklaces, “Fathom” and “Seahorse,” overwhelm the viewer while providing many small pleasures to discover. 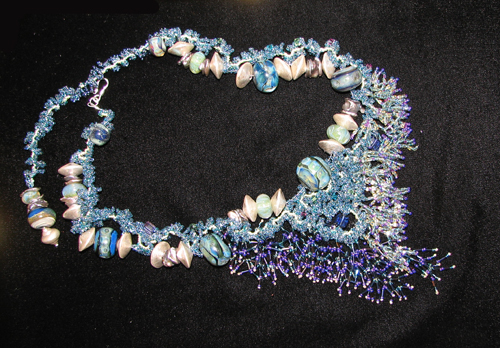 My personal favorites were three “windows” made by Cynthia Oliver that combined a disarmingly simple appearance with layers of sophistication. “In the Moment” and “Simply Stated” are both based on wooden sashes recycled from the days before thermal glazing, when multiple panes were actually separate pieces of glass. Oliver fills each pane with a geometric pattern of colorless glass shapes stacked three- and four-layers deep. Enriching the texture that results, some of the shapes are themselves cut from glass with a textured surface meant to create privacy, but here recalling a whole range of forbidden associations. Each overall design suggests Modernism stripped of characteristic bold color, and that combined with the pale color of the wood dematerializes the whole composition, suggesting a figment out of memory somehow as immediate as the light pouring through right now. Oliver calls her third piece “Higgins Inspired,” perhaps referring to Frances and Michael Higgins, pioneer kiln workers of glass who, since 1942, invented the core techniques central to the art today. They would be honored by the homage. Oliver has fashioned an adaptable decorative system that uses identically proportioned modules of theoretically infinite variety, each embedded with four wire hooks that enable the assembly of a web of glass that could span a window, a doorway, or even a wall.

It occurs to me that I misspoke when I said there was one bit of good news in glass. There is another. Glass is alive in Utah, in the hands of a guild of enthusiasts, amateurs in the true sense of the word, who continue to please themselves and find ways, in the process, to delight each other and their audience. 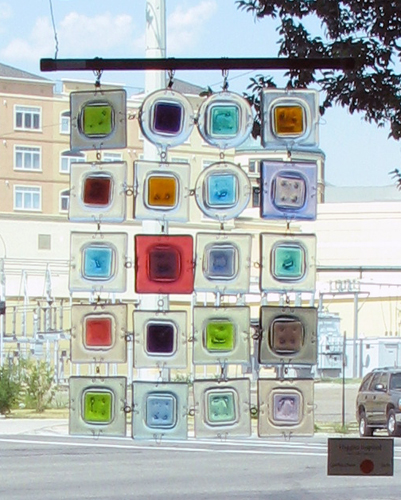