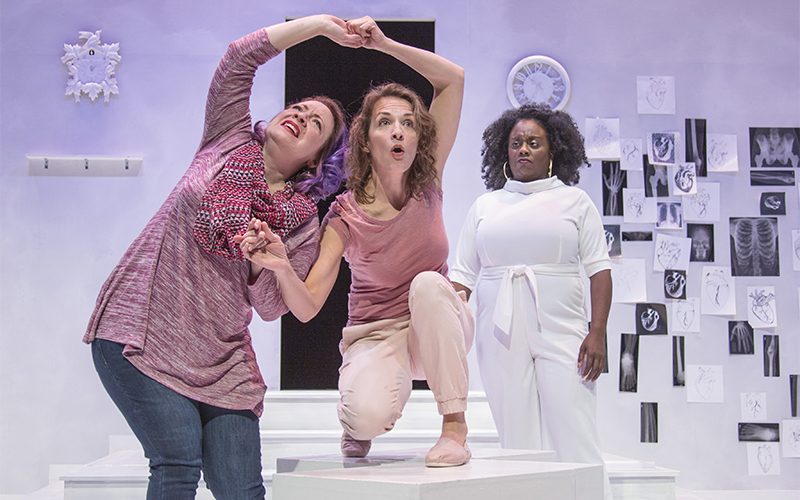 Taking place on a set with almost 20 clocks, Jenifer Nii’s “The Weird Play” has the calculus, the mind-numbingness of geometry. The set, by Halee Rasmussen, contains the gaping hollows of one actual door-opening and one window-opening, opening into the darkness of the Plan-B Theatre backstage, itself clearly a visual play on “when a door closes, a window opens.” It becomes clearer and clearer that these gaping shapes— frightening as an airplane’s missing door or window in flight, but much larger—are high up.

In front of the actors (who in our geometry could be called points A, and B, and C, instead of the simple character identifiers One, Two, and Three) is an ominous white rectangular table in a living room. One and Two take it apart, its many secret pieces suggesting the many secret shapes possible from one piece of paper through the tricks of origami. Unbelievably, from that table eventually come three double-sets of chairs (so high-backed they are almost cartoonishly royal and ceremonial in aspect, symbolic but somewhat sittable chairs for over-poised sitting), the unfolding of this plotless but elegant play seeking answers.

Origami (as seen on the play’s handbill, drawn by Aaron Swenson) is a gift given by one of the lovestruck three characters, from character One to Two: her origami in the majestic shape of a swan. Inside it, One has dared to draw a real heart—surely a hopeless project for pen-and-paper geometricians—no possibility of charting it with points. After she hands it to Two, this drawing of a heart is pinned to the wall alongside other offerings from previous loves of Two: many, chillingly, are pinned-up X-rays, heads or spines or pelvises, a gallery of beloveds in the past, seen throughlater.

The swan (a bird, did you know, protected through centuries by royal order in Great Britain? They belong to the Queen.) remains, as a royal, persisting, permeating idea throughout the play, even if only as a color, the color of blank paper. The set begins as whiteness, though lighting director Jaron Hermansen soon bathes the set with a magenta warm and ethereal to the point of pain; and later, when doubt is setting in about forever love, he lets it veer to ice blue, reminding you that real estate agents are right when they laugh and say no one will buy a building when the heat’s off. The lovely apartment suddenly looks like a trap. If the apartment were a swan, it would be too cold to do anything but huddle down for warmth, or fly away to somewhere warmer. 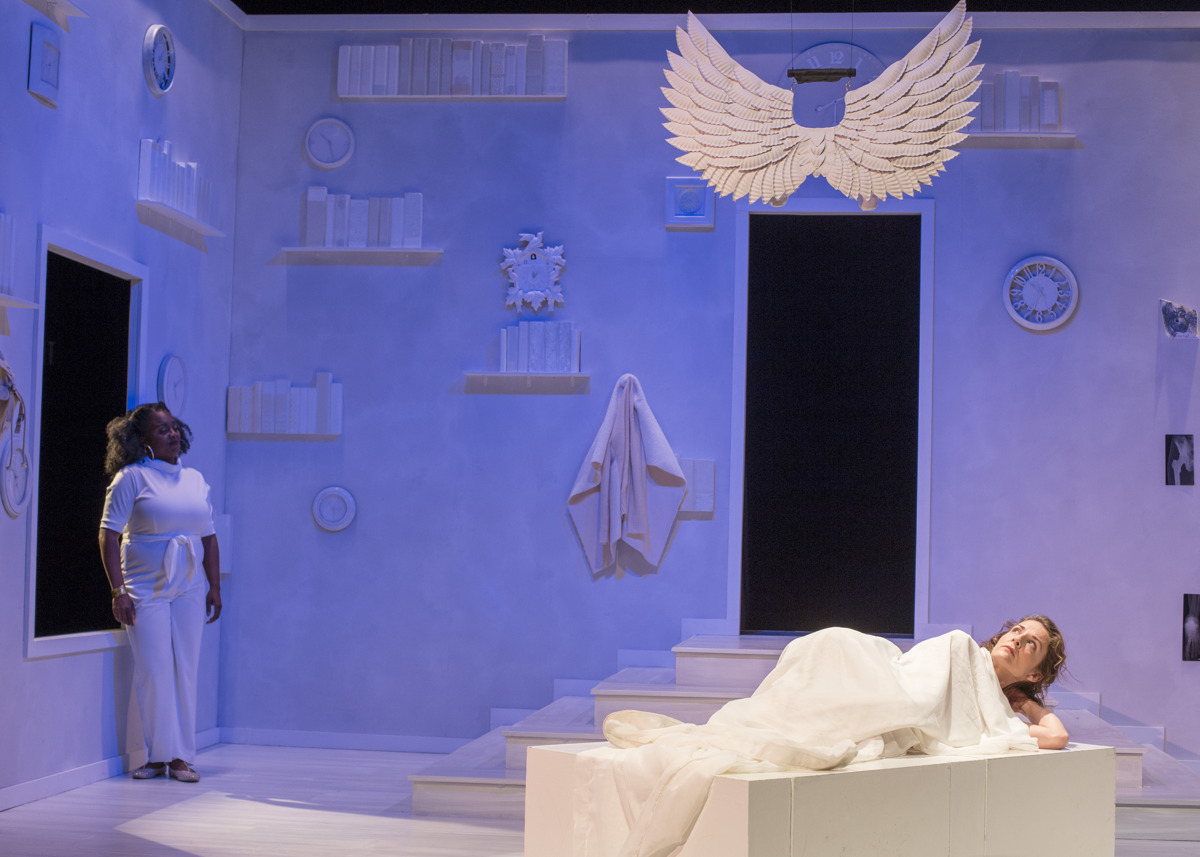 Dee-Dee Darby-Duffin and Susanna Florence in a set designed by Halee Rasmussen. Photo by Rick Pollock.

Most of Nii’s language in the play between One and Two is a swanlike royal high formal one. An actual swanset of wings—almost like a football player’s protective surrounding doublet —descends twice upon One from the rafters. In her exalted, almost shamanic state, she pities the tiny unloved walking people she spots on the city streets below. Dressed by costume director Phillip Lowe in gauze and other fluid fabrics, Susanna Florence (One) moves with the controlled fluidity of a ballet dancer who finds herself locked in the over-idealized steps of what love should be. Like a swan she seems incapable of awkwardness. She is in an iambic pentameter—afraid, if she breaks deliberate step, the sonnet will be lost. (“Hit me,” she even orders Two, clearly wanting to test the strength of love’s trance.)

Two (played by Dee-Dee Darby-Duffin) the acquirer of One’s love, is formidably royal, deep-chested as the most beautiful birds are and with exquisite high, cresting gaze. Character Three (April Fossen) appears as a true wild card, the final part of the geometry theorem, proving threes, as in fairy tales, are often strange solution and magic — the magic that appears after one and two have tried and failed, the point that appears and turns two numbers on the number line into a shape. The character who has lost interest in the high-helium aspect of love, she drops in on One and Two from nowhere (“Who are you?” Three keeps asking).

Perhaps One and Two and Three are only the three-step of Cupid: one (to get ready), two (to get ready), three (to let go). Director Alex Ungerman should be given credit for the incredibly high arc of the first half of the play; Darby-Duffin and Florence maintain their high-trajectory range, and Susanna Florence’s almost unreasonably-ballet-like language and movements lead us to share her euphoria and hope. Yet, we begin to guess, here and there, how their relationship must fade: particularly when Two says she stayed up all night just watching One sleeping, fearful she “might change.”

Many will wonder why this staged poem is called, almost sloppily, “The Weird Play.” Weird invites, immediately, ideas about the weird and wayward sisters of Macbeth and their kettle and fire, or the three Fates (also women, involved in spinning, measuring, and ending the threads of life—their birth-to-death-geometry is really complete). Visual artists too often are guilty of “Untitled,” and this play’s name at first almost seems a variation of that. “The Geometry of Love” you feel could have worked better.

But it does, to its credit, remind us of the weird and serious fact that just as the three witches of Macbeth were more than weird wayward hair and a cauldron, and the Fates are more than a game, we, just like playwrights, fall in love with far more than people: we fall in love with colors, ages, novels, paintings, ideas, even the dead. Sometimes we are in love with conglomerations of all of these, in a movie or a story or a drama; and falling in love with these is a transport from ordinary life. A playwright is more likely to be thinking of their next play than their next lover, just as Leonardo was surely more busy with drawings than with people to take home to bed. The one-two-three may be as applicable to the ideas of an inventor or a lacemaker or a rug-weaver, as a lover.

Nii has said in an interview that all three roles could be fillable by, and in fact were meant for, any variation of age, race, or gender. Laws of love — beginning with the essential parent-to-child and the basic law of when a door closes, a window opens—are also the fickle laws of ideas, landslides, earthquakes. Dreams, like love, are pressures, affecting us all; they are as sure as the laws, in economics, of supply and demand, or in ballet, of how high a person may reasonably hope to leap, or in nature, when a forest fire burns or a river overflows.

As surely our geometry and math teachers knew, but of course didn’t dare to say (we’d find that true ourselves later in life). Here, Nii has made proof: this is almost a love letter, sent as an origami swan of an idea containing the impossible-to-copy-by-origami human heart—a message to some long-ago math teacher, who never dreamed a student would honor him, or mathematics, so. 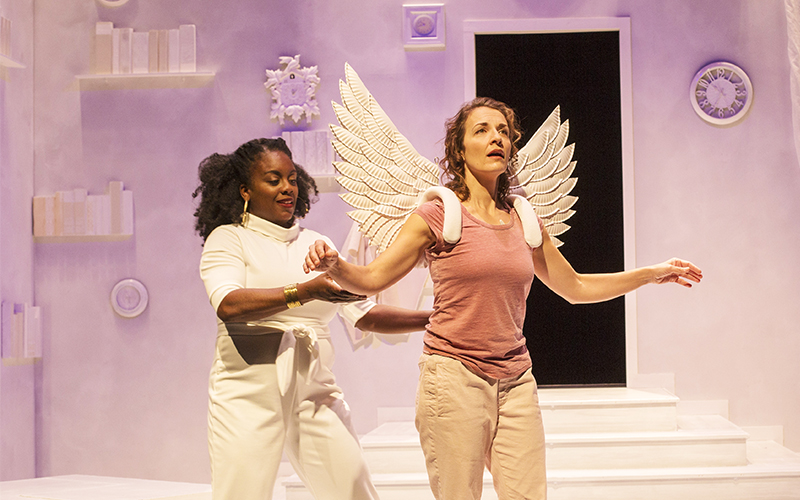 The Weird Play, by Jennifer Nii, one of 10 recipients nationwide of a Writers Alliance Grant from the Dramatists Guild Foundation, Plan-B Theatre Company, a co-production with Sackerson, Rose Wagner Studio Theatre, Salt Lake City, through March 11, Thursday-Friday 8 p.m.; Saturday 4 and 8 p.m.; Sunday 2 p.m. All performances sold out but a pre-paid wait list forms in box office one hour before show time. Refunds given to those who can’t be seated five minutes before play begins. Plan-B has always been able to seat at least two waitlisters.