The Family of Things at Alice Gallery 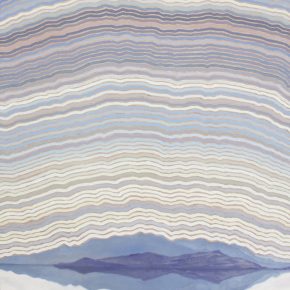 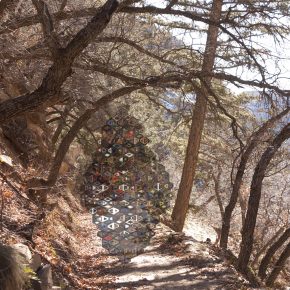 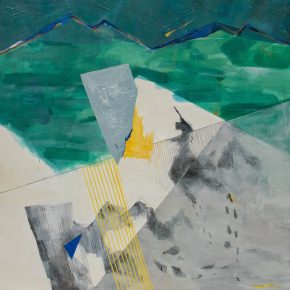 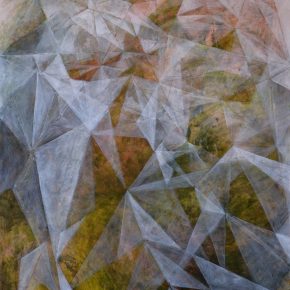 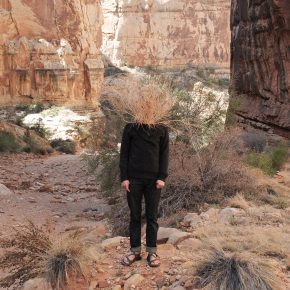 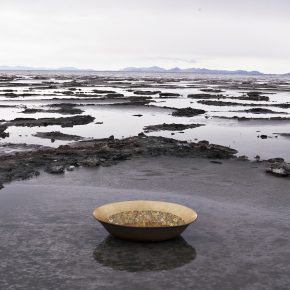 Whoever you are, no matter how lonely,
the world offers itself to your imagination,
calls to you like the wild geese, harsh and exciting –
over and over announcing your place
in the family of things.
—from Wild Geese by Mary Oliver

The Alice Gallery offers one of the finest exhibition spaces around: intimate, neutral rooms in which to get close and personal with art. They are not, then, the logical first choice for traditional landscape art, where large canvases and vast represented distances can demand analogous viewing distance: where viewers must back up to take in an entire vista. The good news, then, is that The Family of Things is not a show of conventional landscapes. The even better news, especially for those who have developed a resistance to those 19th-century conventions, is that these five recent BYU graduates share a new and updated idea of how to represent the land: one that acknowledges the romantic, often sentimental view, dating as it does from the simultaneous discovery of the desert Southwest’s world consciousness-changing terrain and the invention of photography, but does so in order to examine its conventions and its relation to how we see those same features today.

Mary Baum accurately distills the goals of Magic Realism into her landscapes. That is, she grounds her images firmly in facts: for instance, in the contrast of soil and water that she finds in the littoral zone, no longer sea but not yet land. By preconditioning how she sees, though, she finds views that enchant—without fundamentally denying—that reality. In the background of “Searching for Magic 1,” ridges divide the water into horizontal strips that each reflect the luminous, overcast sky. In the foreground, the contents of what appears to be a prospector’s pan, its inner surface gilded, shows something very different: a pattern of diamonds and hexagons clearly not part of quotidian nature, yet elevating the natural. In “Searching for Magic 2,” she makes clear that this representation, this symbolic stand-in for magic, is meant as a reflection of the sky in water: their dialogue is one form of the magic. In “Searching for Magic 3,” the geometric field has spilled from the pan and spread to cover all the labyrinthine paths the water has taken. An accompanying video brings that geometry to scintillating, roiling life. The viewer is invited to combine the moving image with the necessarily still photographs in order to see Baum’s magic in itself and as a vision in nature.

If Baum suggests Magic Realism, Hannah Mortensen invokes another still-lively way of making art: Cubism. Yet her topographical geometry invokes something other than a merely human, aesthetic imposition on the natural world. Like a fractal equation, her brush finds in the large forms of rocks and mountains the microscopic organization of silica and less common minerals into the crystalline lattices that hold this world together. In order to show the characteristic cleavage planes in “Mountain,” she projects them in white from an undifferentiated mass of yellow. This is a diagram of awareness: not just what the eye sees, but again and also what the mind knows. While she does not specifically invoke the controversy over hydraulic fracturing, a case can be made that like all good art, Mortensen’s changes the viewer’s awareness while enriching understanding of what such academic and political arguments actually are about. Mortensen’s canvases also present a particularly beautiful version of a vision that often struggles to stand up against the visual pleasures of more traditional approaches.

Jena Schmidt finds another route to re-envisioning the sensuous beauty of the landscape. Technology—digital and otherwise—has conditioned viewers to be receptive to high contrast, false color, and other distortions that would have made no sense at all to the audience that enjoyed the likes of Thomas Moran, Frederick Remington, or Albert Bierstadt. Schmidt pushes the limits of visual perception, producing images that slip through the grasp of eye and mind in places, but are caught and eagerly deciphered in others. She gives viewers a defamiliarized landscape, one that hovers on the brink of decipherment, restoring the adventure of perception to a level akin to that of exploration. Her treatment of “Mt. Lookout” gives the name literal significance.

At the opening reception there was one sound—one ‘comment’—overheard that rarely intrudes on an exhibition of landscapes: laughter. And this wasn’t derisive chortling, but hearty appreciation. The cause was four photographs by Ronald Linn that slotted neatly into multiple references, beginning with the ‘Green Man,’ a symbolic incarnation of nature that dates from the Dark Ages. Linn’s version found a full-length figure of a man in each photo, surrounded by characteristic topology and foliage, in each case his head replaced by shrubbery that seemed to explode from his neck. Subtitled “Sagebrush,” “Cedar,” “Tumbleweed,” and “Moss,” each image underscores the appropriateness of a particular plant in a certain environment, doing so not in a didactic way, but in a way made as memorable as reflexive laughter. Even committed art fans don’t always recognize when a work is destined to stick in memory, never to be forgotten, but the four Green Men are a safe bet to be recalled . . . frequently, if only for their wit. Of course they’re not just odd: they invoke serious, even philosophical questions about the personification of nature and the natural state of man. Seen alongside them, Linn’s comparatively straight landscapes also reveal a cerebral side. While their primary characteristic is the way aerial light is represented by rainbow-like, sinuously patterned lines, in “Yellow, Blue Sky (Promontory Point),” while Salt Lake reflects the point like a mirror, is gives back the cloudy sky that might have been expected, rather than the pattern actually seen painted above it.

With such a range of approaches or strategies, viewers may well find favorites. For me, the first among equals at the Alice this month is Tiana Birrell, whose analytical approach perfectly balances the traditionally static ‘look’ of the landscape with the desire to capture its dynamic experience. In the most immediately accessible, a trio of drawings titled Observatory: Opening the Eye 1, 2, & 3, the conventional, routinely overlooked abstraction of graphite drawing is ruptured repeatedly. In places in the drawing, lines expected to convey sensory data are replaced by cerebral symbols: dotted lines, mechanically drawn straight lines, and so forth. Circles limit the ‘official’ field of view, but the drawing violates those restrictions and calls them into question. Layout and rendering contrast strikingly. None of these treatments is unprecedented, and in places they might be taken for artifacts of a sketch being incomplete. But taken together, they bring not only the passages cited, but the entire enterprise of drawing into a state of semantic questioning: what do these marks really mean, and why?

Two panoramas on opposite walls consider such questions in the larger context of recent art. “Templa Coeli” (Temple of Heaven) locates a bit of landscape in a sea of clouds, but also places both in a now-familiar, academic system of late twentieth-century mark-making and paint manipulation. More of a revelation, surely, is “Cathedra,” in which a treatment recalling cubism turns in something far closer to how we actually see than the conventional attempt to render a panorama as though—sudden recognition here—no one (but a machine?) was actually watching the painting being made. Think of it: when viewing the original landscape, one plays ones eyes over it, mentally focusing here, zooming in here, out there, using mental skills to essentially edit the view as one might a photograph. Traditional rendering strives to reproduce not the experience of seeing, but the reality of the thing seen. In theory, this approach permits the viewer to reproduce that act of optical editing off the painting just as in the presence of the original vista. But what Birrell has done is present one possible ‘edit’ of the view, emphasizing and repeating what stood out for her. Thus she brings a static image to evocative life, much as video documentarians have done with still photos (what is often called the Ken Burns effect).

With The Family of Things, these five artists have not only staked out a very valid claim for a viewers’ attention; they have coincidentally asserted the efficacy of whatever BYU’s art department is currently doing. Someone at the opening was heard to praise that department at the deliberate expense of the U of U’s. While such comments are of questionable merit outside the athletics departments, a spirit of competition has occasionally been known, starting with the Renaissance, to benefit all the contenders. Landscape, arguably the backbone of Utah art, can only be improved by such efforts by new artists to show off what they can do.