The Evolving Nature of Creative Partners 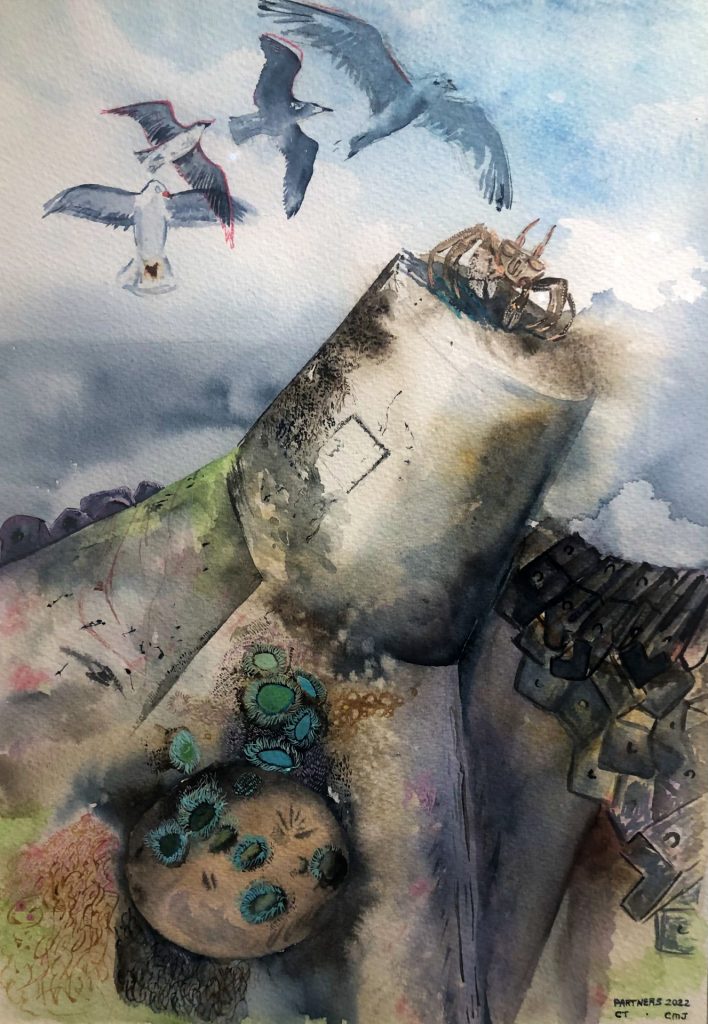 Chrysalis Jiri’s untitled watercolor depicts a rooster strutting on a grassy field, with a fence, a river, and a mountain range in the distance, all beneath a scrubbily-brushed, cloudy sky. Nowhere does the painting technique approach optical realism, but everything is clearly identifiable — not least the rooster, a strutting, bright red cock with his head held higher than the mountains, reaching the sky. It’s psychological realism — or should that be “zoological?” The remarkable thing about this, and the other paintings by this artist that hang near it, is the complete contrast between them and the bold, but utterly abstract arabesques and dot matrix patterns the artist showed exactly a year ago in the same gallery.

On that occasion, in January of 2022, Art Access emerged from two years of pandemic-caused gallery closure with a new plan: they would continue to exhibit artworks made by their stable of artists, but not in their own space. Rather, they would submit shows to other galleries, places like Finch Lane and the Bountiful Davis Art Center. The first BDAC show featured ten artists in five pairs, the Partners program being, as their overall statement explains, “a mentoring program that matches an emerging artist with a disability or from another marginalized community with an established artist.” The stated duration of the partnership is one year, but two of that year’s artists, Joe Adams and Brian Kershisnik, have in fact worked together for many years and continue to do so. 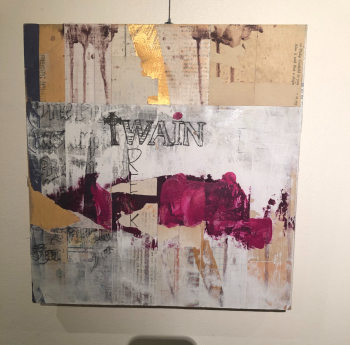 Tyler Pierce’s “Twain Wreck,” from his time working with Namon Bills in 2021

Their success may explain in part why two of last years mentees have gone on to find other mentors who had new things to teach them, and appear here to have been doing something quite different this last year than they had done the year before. Jiri is one of them, who first worked with Jessica Hancock and has spent the last year working with Claire Taylor. The other is Tyler Pierce, whose work here, done after mentoring with Cat Palmer, demonstrates the same kind of dramatic shift from last year’s efforts.

It’s important to point out here that this is not a criticism of their previous mentors. Every artist goes through a succession of apprenticeships, whether they realize it or not, whether the relationship is formal or something else. Namon Bills devoted his skills and resources to supporting Tyler Pierce’s abstract sense of design and gesture, rather than his impulse to use visual art as emotional support for his verbal self-expression. Think of background music in a motion picture or video. Now that the progress they made appears to have given him a better understanding of what he wants to say, Cat Palmer’s photographs are well-suited to more elaborate use of poetry and prose, such as Rainbow Rowell’s lines about what an artist is supposed to look like, which play out over “The Shape of You.” Here, the two artists’ meditation on appearance covers a dress dummy’s female torso like a second skin that reveals, rather than conceals, her inner being. 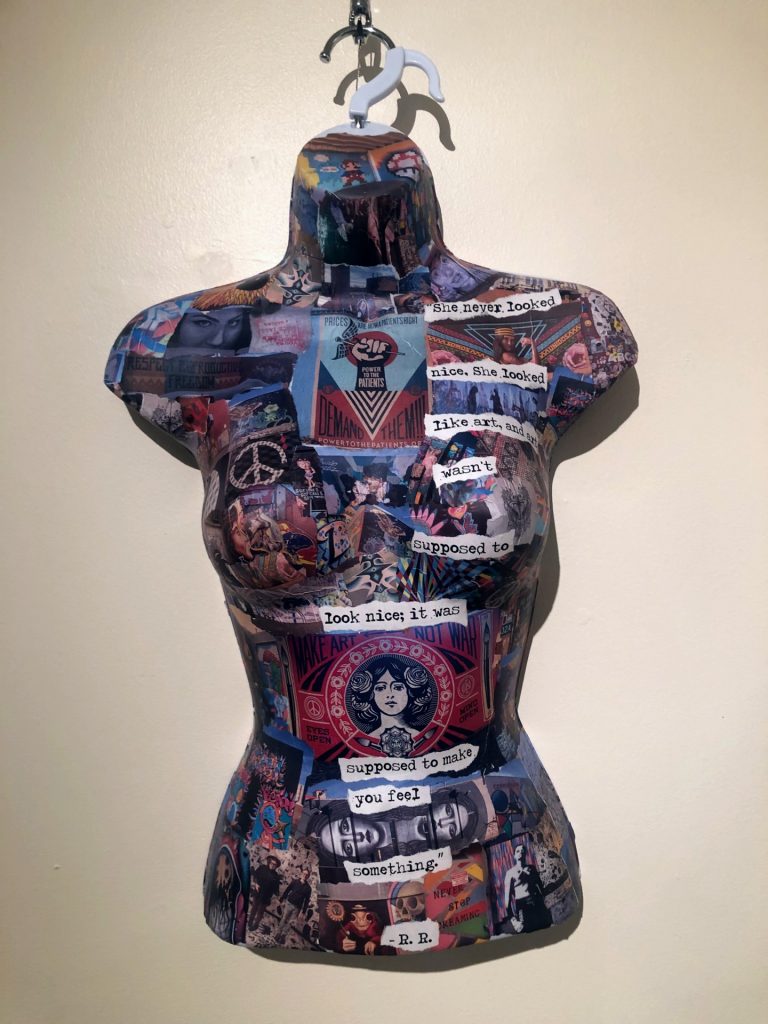 Tyler Pierce’s “The Shape of You” from his time working with Cat Palmer in 2022, photo by Geoff Wichert

Around the same time, Jessica Hancock may have been chosen to mentor Chrysalis Jiri because Hancock’s geometric abstractions achieve a virtual apotheosis of pattern and design, which were clearly sympathetic to Jiri’s desire to fill a given space with active, even compelling visual gardens. In Jiri’s sketches, some of which were included in last year’s show, the viewer occasionally found a face or some other representational element being tried out, but linear elements prevailed. This year, she worked with a painter, Claire Taylor, who at the same time as she was mentoring Jiri was proving herself, in a large exhibition on the fourth floor of the State Capitol, to be gifted with preternatural insight into the natural world. Her revealing vignettes, drawn from life and combined in unexpected, but sure-footed ways, probably appealed to her mentee’s desire to avoid reducing the depicted world to a single, unnatural focal point. In any event, her new works, like Taylor’s, provide a pleasing hierarchy of subjects in an overall enticing and intriguing scene.

Lately, is seems that a cottage industry has arisen that lets talking heads tell us about all the good things the pandemic brought. I’m all for finding light in the darkness, but there’s much to be said as well for the light that seemed to go out, but was never really gone, and has now come back. Tally the Art Access Partners program as one of those. 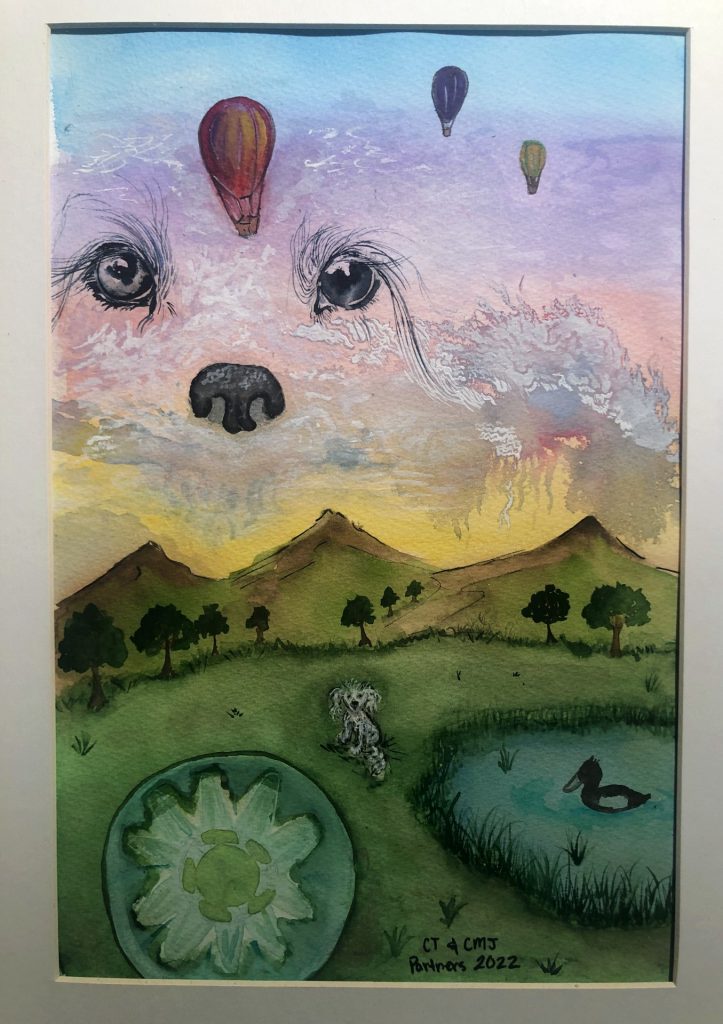