The Earth Is Not Flat: A Reading at Kings English

The theme of Friday evening’s festivities at King’s English was “The Earth Is Not Flat,” from the title of Katherine Coles’ fifth volume of poetry, just published and eagerly anticipated by followers of Utah’s leading poet. If that title sounds more like it belongs on a scientific treatise than it does a collection of lyrical images, it may be time to recalibrate what we expect poetry to be. Literature is the envelope of knowledge, but mythic knowledge has given way to science, and for readers who want to know as much as feel, art and science work best when yoked together. Not for nothing do scientists seek elegance and beauty in the ways they express their ideas. Neither was Robert Frost speaking loosely when he wrote, at his most succinct—which is to say, his most poetic—that “We all dance round in a ring, and suppose / But the secret sits in the middle, and knows.” Katherine Coles, poet, is married to a scientist, and in her poetry she marries incandescent observation with a mind humbly open to new discoveries. She is known as a gifted poet, but in Antarctica, the subject and location of The Earth Is Not Flat, she proved herself a scientist as well.

Poets and scientists share an intrepid calling: think of Byron swimming the Hellespont, or Shackleton setting out to cross Antarctica from sea to sea. In The Earth Is Not Flat, Coles cognitively and sensually dramatizes a month she spent in Antarctica as the guest of those scientists who venture there for research and, by international treaty, constitute its primary human population. In an era when tourism has made many once-exotic locales mundane, Antarctica remains difficult to reach and dangerous to visit. And yet, while travel to the world’s least-populated continent may seem to echo, say, Wordsworth’s retreat to a cottage in the Lake District, the resemblance is illusory here. Coles is a literary activist known as much for her teaching and performance as her texts. It’s not the least bit surprising to find her a particularly welcome guest of Anne Holman and King’s English bookstore’s, nor to see her fill the 15th Street Gallery, where Friday’s debut was held, to capacity. Nor to discover that most of those in the audience felt they had a personal connection to her.

In 2011, U of U professor and nationally-recognized composer Steve Roens set a sheaf of Coles’ poetry to music for the Eschler Music Foundation in North Carolina. He was on hand in the gallery to hear soprano Cheryl Hart, accompanied by pianist Verdana Subotic, open the evening with a performance of that work. Roens writes atonal music, characterized by eloquent rows of single notes that complemented the succession of individual words they paralleled. Together, Roens and Coles built architectonic sound palaces in the gallery’s space and in the mind.

Then Katherine Coles stepped up to introduce her new work. Many poets deliver dry recitations, forcing each poem to stand alone. But she arrayed her selected gems in a narrative setting, recounting the context and origin of each and giving just enough clues to make them accessible on first hearing.

After the reading and a lively Q & A that, transcribed, would make a worthy dialogic complement to her sometimes linear, at other moments conversational verse, everyone returned to King’s English for wine, cheese, crudities, and conversation. While signing their copies, Coles drew out connections to each reader, with which she annotated her signature. While waiting for a personal encounter with someone who seems to overlook nothing, they might have noticed a poster for a workshop beginning later this month at the Marriott Library. Featuring a thematically appropriate, frightening yet beautiful photograph of a damaged book, it promised to teach the skills necessary for the restoration and maintenance of objects that, digital commerce notwithstanding, were precious to everyone present. As we collectively closed the chapter on the creation of The Earth Is Not Flat, and began what will be its communal life, I thought of how we keep books alive—by singing and reciting and, when necessary, stitching them, but most of all, by reading them. 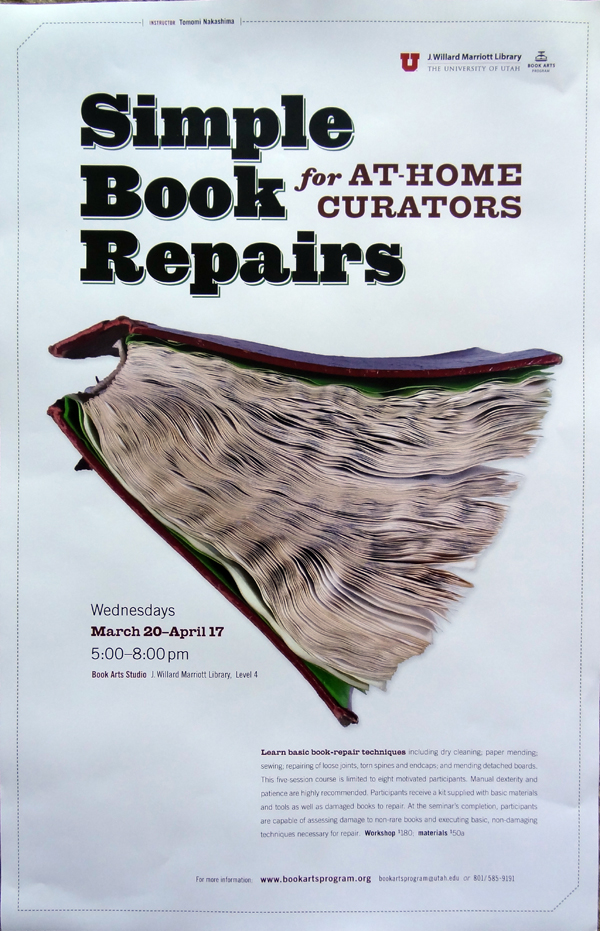 If you missed the King’s English reading, you’ll have another chance to hear Coles read from her book at Weller Book Works,Tuesday, March 19, 5 pm – Presented by The University of Utah College of Humanities.