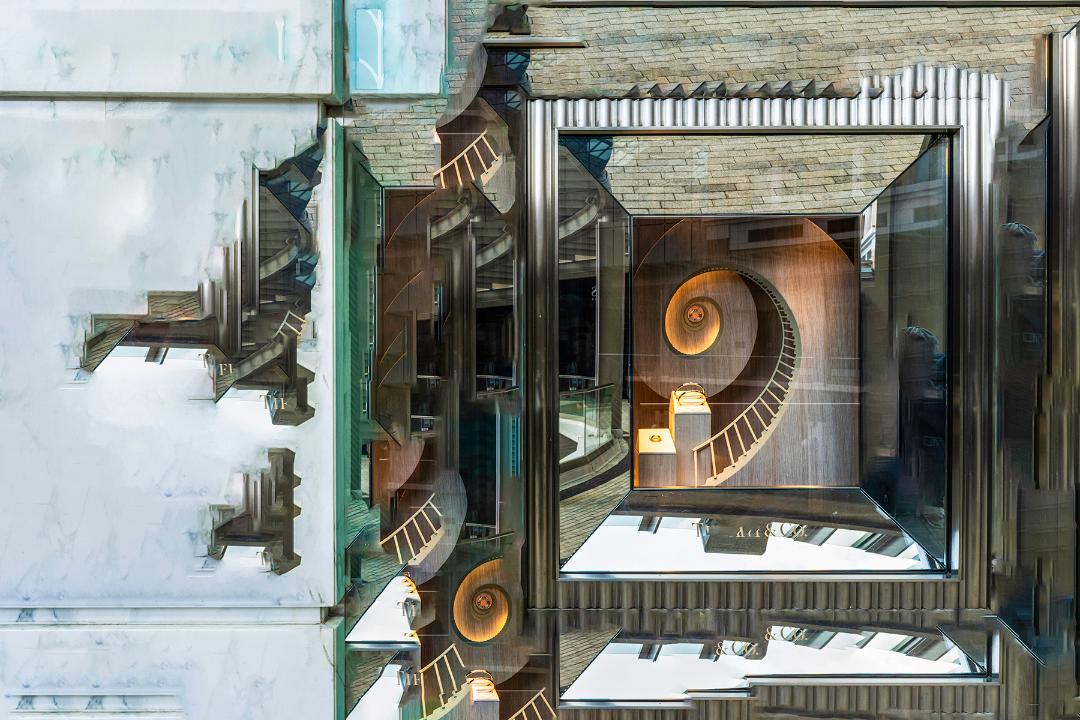 Bernard Meyers has shown original and evolving approaches to photography at the Alice Gallery and now at UMOCA, but he always has something useful to say about it, as well. At his 2014 exhibition in the Alice, his statement began, “I love ambiguity.” In a medium where most practitioners either show what their camera was pointed at, or else strive to turn what’s in front of it into an abstract design, his choice was to find a path that let neither content nor design predominate. His photos showed something real but mysterious, while their patterns held an interest aside from what they represented. The images were as intriguing as they were alluring. 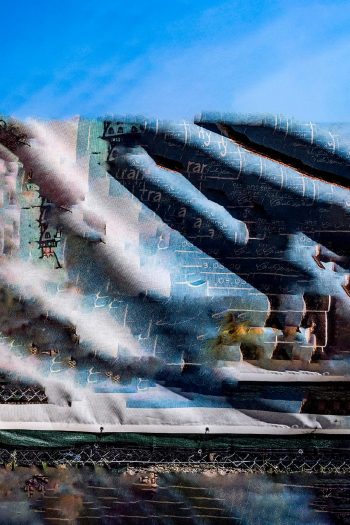 With this show at UMOCA, he’s chosen to quote Minor White, a photographer’s photographer who captured the respect of his more famous colleagues without quite captivating their audiences. “Photograph something not for what it is,” White wrote, “but for what it can become.” One thing a photo often becomes is part of a collage, where parts of several images are cut and pasted, whether with scissors and glue or with Photoshop, to create something that never existed before, or could not — or in any event had not — been depicted. Enter Bernard Meyers.

Beginning early in the twentieth century, Picasso and Braque introduced collage to Cubism, at first to save the labor of depicting familiar subjects, but eventually to undermine the relation of visual reproduction to truth. Surrealist Max Ernst followed them by deploying collage to produce credible, mock-bourgeois depictions of scenes from universal nightmares. All these had in common that the technique was obvious: not meant to fool viewers so much as to engage and entertain them. 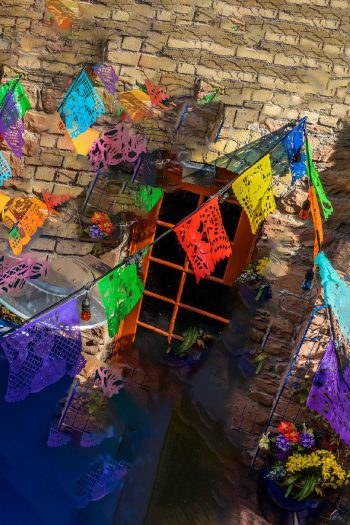 A century of such works set the stage for Bernard Meyers and his “Urban Abstracts.” His attraction for ambiguity has brought him now to reverse his earlier progression, and rather than using the haphazard visual qualities of his photographs to challenge their information content, he’s using their recognizable, urban content to conceal the work of drawing artistic images out of what was there to see and photograph. Staples of abstract art like geometry and color arrangement feature largely in these several dozen untitled photos, which often resemble nothing so much as candid snapshots of some anonymous, modern city accented by torn, weathered, or partially dismantled signage. Yet almost all these almost familiar subjects are bright, shiny and attractively deranged. The way these scenes are able to be both haphazard, as urban perspectives commonly must be, and yet engaging and inviting, keeps them ambiguous, and prevents their audience from grasping and relegating them to something familiar that can be absorbed and forgotten.

In reality, these urban abstracts are the product of extensive post-camera manipulation, a fact that becomes more apparent when the abstract elements are more recognizable. For the most part, they consist of photos that have been digitally collaged back into themselves, in some instances broadly and elsewhere in elaborate detail. This auto-digestion explains how they can be so unreal and, at the same time, so consistent in lighting, color and other elements. Used masterfully by Meyers, this technique has the power to destroy the interpretive sense and meaning of lines, angles, textures, and other clues and replace them with equally meaningful, yet contradictory readings. What looks like a row of cottages is revealed to be a fragment of a brick wall. An architectural tunnel was carefully assembled from triangular segments of a fence. 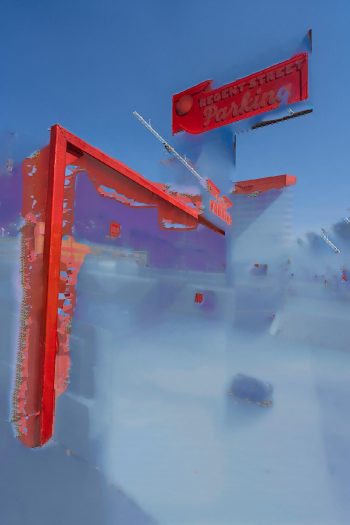 As mentioned above, many of these are bright and colorful. A few border on somber slices of urban life, like a doorway to the underworld. Most contain some familiar elements, like metal siding or other commonplace construction materials, and while the cut-paper flags over a red French door may especially delight the eye, there’s a lesson here in how indifferent objects can also become the most extraordinary patterns in the hands (and software) of someone with skill.