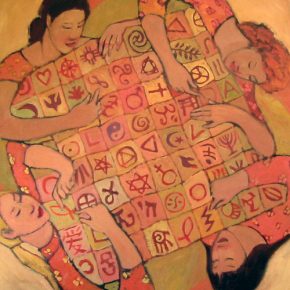 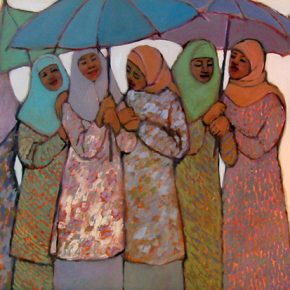 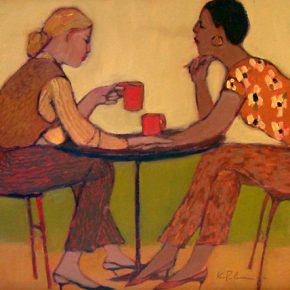 It’s hard to imagine how two bodies of work by two established artists, each making original and mature art and each working at the top of her form, could look more comfortable together than these two. When artists show together they sometimes divide the gallery between them like a bedroom shared by quarrelling siblings, but in the rambling main space of the Phillips Gallery in downtown Salt Lake the figure paintings of Kathleen Peterson and the landscape prints of Blanche Wilson share the same walls and rub shoulders like old and very dear friends. Despite contrasting subjects and mediums—and only the most casual glance could fail to notice two very individual sensibilities at work—the show coalesces in a harmony built around similar formal concerns and a common feeling for what it means to be human.

The harmony begins with interlocking subject matter. Peterson’s oils are all figures: in fact, they are all women, mostly in pairs or groups. She presents them without settings, in order to clarify and emphasize relationships between them. Wilson’s prints portray locales, primarily specific to the Ogden area but all familiar western scenes, that often feel like stage sets waiting to be peopled by the viewer’s imagination. Although Peterson’s figures represent women from all over the world, it’s not too far-fetched to mentally place them into Wilson’s sometimes urban, sometimes wild, but always nature-sensitive environments.

Both artists’ approaches imply narratives but don’t spell them out. Both are suffused with emotional keys, including a wealth of specific details done so as to convey broad meanings, with a light touch underscored by deft handling of light and the colors it reveals. And both courageously convey a simple faith in the conviction that if we just look at the right places and people, we can see that creation is unfolding exactly as it is meant to do.

There is considerable irony involved in locating this work against the backdrop of mainstream art, to appreciate which requires a short excursion into modern art history. We know how a hundred and fifty years ago painting had pretty well fulfilled its mandate: to find the means of depicting the world we experience in all its richness and complexity, using only visual cues arranged on a two-dimensional surface. The search by artists for additional ways to encode the world then led to at least three alternative systems of depiction that were to revolutionize all the arts, not just painting. One was photography, another the popular press with its capacity for bold graphic display, and the third, probably most important, was globalization and the recognition that beyond Europe lay countless other ways to see and represent the seen. Impressionism drew on the camera, posters, and Japanese woodblock prints. Cubism added Iberian and African sculpture to the mix. Eventually the avant-garde inverted what had been the goal of art since the Renaissance, instead granting the system of representation autonomy and dismissing subject matter as irrelevant to making of art. If you’ve stood before modern art, then, and wondered why you couldn’t tell what it was about, it may be because since the middle of the last century it was likely to be about nothing but itself.

So under such a regime what is the status of art like Peterson’s and Wilson’s? Peterson has worked extensively as an illustrator, producing her images in close collaboration with writers, so that neither pictures nor text can be said to merely serve the other’s needs. Her approach to oil painting brings along the visual qualities she learned as an illustrator: flat areas of color divided along edges that, in addition to separating colors, carry the expressive power of the hand that drew them. She also displays a willingness to use visible marks to present non-visual information: as decorative elements and to convey more than just visual information. Wilson uses woodblocks, like those used in the Japanese prints that mesmerized everyone from Manet to van Gogh, and their effects are still as compelling. The texture of the wooden matrix replaces the look of things with the feel of nature. Both artists use techniques that argue visually that not all the data taken in by the eye is of equal importance: that awareness and desire are part of how we perceive.

Many so-called avant-garde artists graft these traditional forms of representation onto their work, but they attempt to filter out the substance in favor of the form. Not so Peterson and Wilson. When artists in Paris and New York flattened their representational spaces it was in pursuit of novelty. The artists they copied, “primitives” in their estimation, depicted the world as they did because, for them, the pattern was more important than space. They were more interested in what holds the world together than in what separates the parts. And so are Kathleen Peterson and Blanche Wilson.

Take for example Wilson’s “Wheeler’s Canyon,” a landscape woodcut in black and white.  In the lower half, which we read as the foreground, the tops of trees set up a pattern of soft, rounded forms interrupted by patches where the ground is visible. Above this a dark, thrusting wedge of trees seen from the side indicate one limit of the canyon. The opposite wall, an inverted, matching triangle of eroded, sun-struck rock, has the vertical linear texture of the forest but a pattern of light-and-dark like the trees in the foreground. It’s like interlacing the fingers of our two hands so they become part of a new, singular thing. The entire composition alternates between a horizontal arrangement, from near to far, and a vertical arrangement from bottom to top. Five birds, negative forms against the dark forest, add to the force of the latter by reminding us that our own point of view is also elevated; we are looking down into the canyon from above the trees.

Such elevated points of view abound in Wilson’s prints, as they did in Impressionist paintings and Chinese and Japanese landscapes. So do textures: in “Beautiful Moon”  the night sky is like watered silk. In “Tethered Boats,” water adopts the vocabulary of wood grain. In “Taylor Ave,” the late-afternoon sun that streaks the sky with red also streaks the snow-covered ground with blue, and we realize it’s the same process. Time is an essential ingredient in all these places, too. In “Taylor Ave” we see the distant city of Ogden at the moment when electric lights precisely balance the waning sun. In “Willard Bay,” the light dapples off the lake just beyond plowed fields and orchards marked by shadows set into play by the same raking sun. Harmony can arise. In fact, our senses tell us it will, it must.

Peterson, too, has an interest in texture and harmony, but the potential for rupture plays a larger, if largely implicit, role in her paintings. In “Three Sisters” and “Quilters”, to take extreme examples, textiles that are woven together symbolize the power of words to enclose and divide us. So, too, the dozen women in “The Dance” are interlaced in ways that could have spelled a darker reading: confinement, the medieval Dance of Death, or the mass graves of yesterday’s newspapers. Always, though, the argument for kinship is made through the figure: through pose and expression. Whether it’s entwined arms (“Small Talk,” “Jackpot”), arms draped over each other’s shoulders (“Divas of Deity,” “Border Crossing,” “Fruit Vendors,” and “Sisters”), children draped over their parents (“Story,” “Sleeper,” “The Red Ball,” and “Iraquis”), or the tilt of a head and the embrace of eyes, the connections that exist between the subjects are restated formally by harmonies of color and form. In “Malaysian Reign,” shared umbrellas suggest a more accurate way to look at the headscarves beneath them. In “Two Red Mugs,” the women’s bodies enclose their excuse for lingering together like brackets while they lean together like the unequal sides of a single heart.|7|

The test of any work of art ought not to be whether some theory supports it. Even in the twenty-first century, the proof of the pudding still lies in the eating. Art lovers with hungry eyes — and in this historical moment, which no less an authority than the august critic Robert Hughes has termed an artistic “slump,” the eyes of art lovers are seldom enough sated — those who enjoy work that fires on all its cylinders, that combines pleasures for the mind with those for the rest of the sensory apparatus, should avail themselves of the opportunities afforded by the chance to see work by not just one artist who truly understands what she is about, but two such artists; and two who, like form and content, make each other look even better by appearing together. 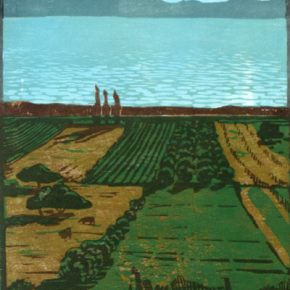 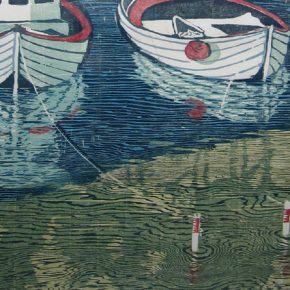 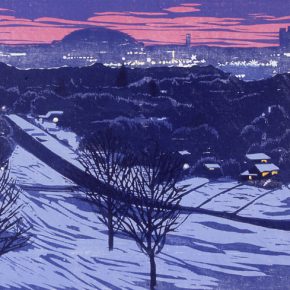 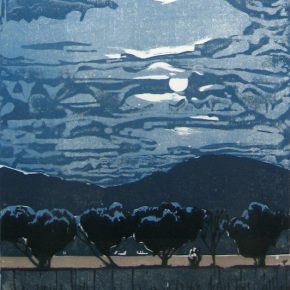 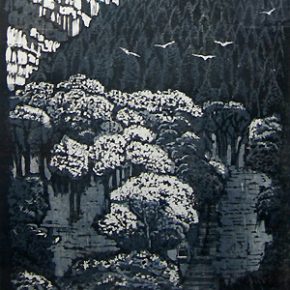