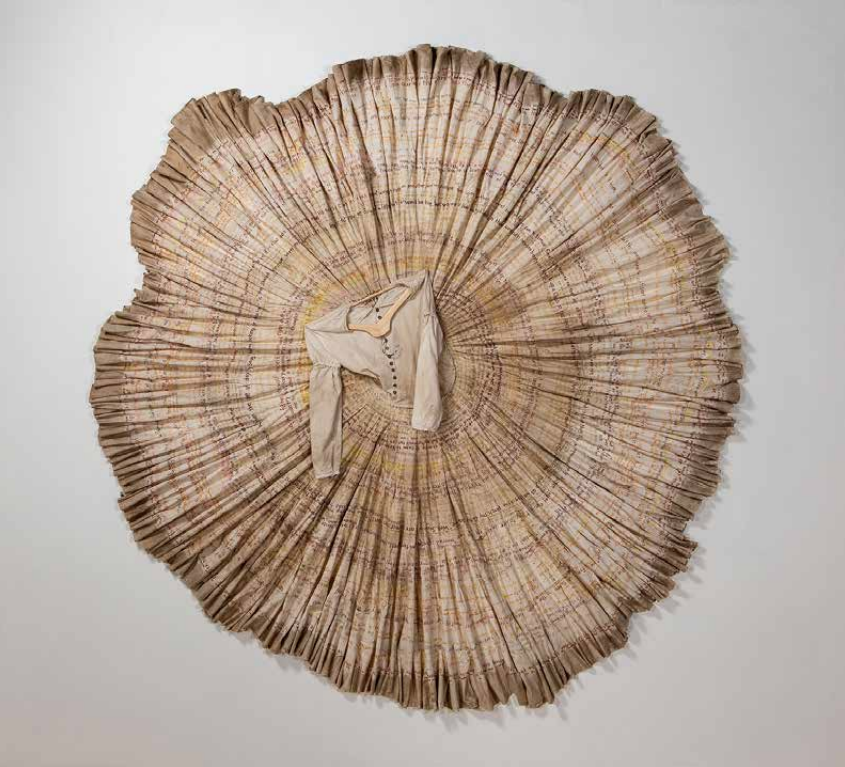 There were times in the 20th century when the most compelling works of art came from the crafts end of the art spectrum. Some works that emphasized fundamental materials, be it wood or glass or ceramics or textiles, seemed closer to the essence of artistic expression than what filled the high-end galleries. Someone like Martin Puryear could make seemingly anything, from a mound of earth to an elaborate, mixed-media construction, not just speak, but sing. To be sure, there were craftsmen who didn’t get it, who thought their glazed dishes or hand-blown Venetian goblets copied from centuries-old models would lead to the recognition of their genius. On the other hand, at least when that hand belonged to someone like Jim Jacobs, art teacher at Weber State until his retirement in 2016, a work that evoked functional ware, like a machine-made wooded chair, might tellingly recapture its origins as a tree when it sprouted wild, leafy branches.

What that means today can be seen at the 2021 Statewide Annual, on display at Finch Lane. Jacobs’ “Conversation,” a maple coffee table, “like those around which we converse, share opinions, and look for the commonalities that unite us,” as the artist says, falls victim to our recent pandemic troubles, such as beset Thanksgiving gatherings as things began, seemingly irrevocably, to turn into conflict. At one end and for most of its length, this masterful table demonstrates how a natural event, such as the growth of a tree, may have a cerebral desire for form and function imposed on it. But then something goes amiss, and the planks begin to lose their harmony, to split apart, and finally to twist into a chaotic tangle that can’t be sorted out. We’ve all had this experience: a conversation that went horribly awry and couldn’t be resolved. Or maybe that’s not the only way to see it. Perhaps this conversation is one of those we’ll remember for the rest of our lives, when the cool exchange of ideas and opinions suddenly let something brilliant, exciting, and utterly unprecedented into our world. 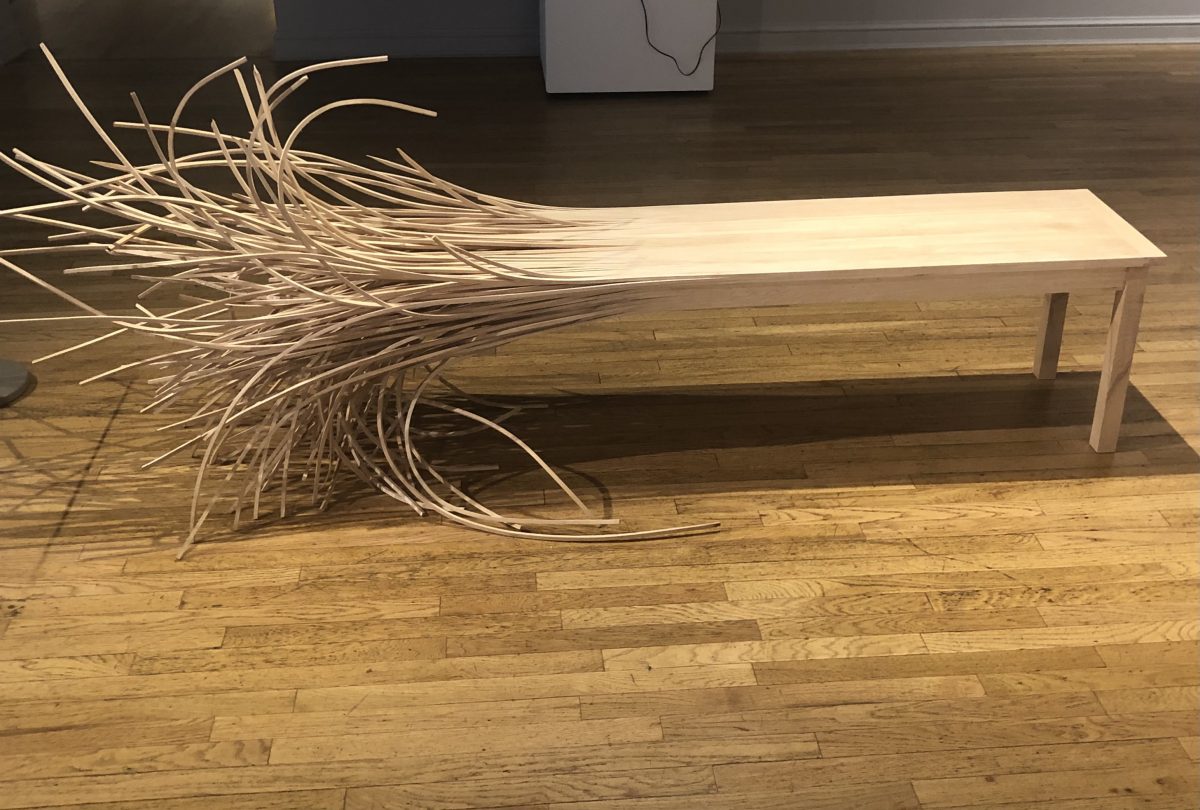 The concept of the Statewide Annual arose in a time before mixed media became so much an essential part of Utah arts. Even in the basic media, like paint, it’s no longer common to see a “pure” oil painting: compare the antique works that fill our museums with the 2021 Doctorow Prize Winner Genesis Jerez, who collages painted paper on un-stretched canvas. In fact, Jim Jacobs stands out in the way he limits himself here to traditional wood technique, though his results are anything but conventional. Almost none of the other works here makes pure use of one of the ten-or-so art media originally specified in the three-year rotation that completes the Statewide Annual. 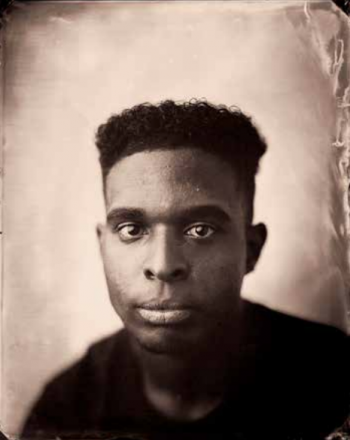 That said, one other medium that received an aesthetic and critical upgrade in the 20th century was photography. Ansel Adams is usually given credit; before he and his colleagues promoted a purist, rigorous technique, even major figures were considered documentarians or illustrators. Part of photography’s recent advances have been made by going back to its origins in one-of-a-kind processes that were as time-consuming as they were exacting. For this exhibition, Madison Casagranda submitted two wet plate collodion tintypes, portraits of “Dante” and “Mara,” that show why these techniques are being revived. The response of his subjects’ Black skin to light is so much more rich and subtle with the gray scale — the sensitive range of tones — that more recent emulsions than this long ago sacrificed.

Other photographers have chosen different ways to escape the mundane outcomes of so many thousands of mass-produced, indifferent images. Instead of taking her own photos, Etsuko Kato finds them among troves of discards: boxes found in attics and dropped off at thrift and antique stores. She focuses on Japanese photos, of her immediate ancestors, in particular having to do with wartime, which she modifies until they express her experience as a descendent of those who might appear in them. In “The Memories, Series #9,” she uses an opaque ink thumbprint to foretell the fates of almost an entire cadre of aircraft pilots who fought valiantly for the losing side. In “The Leftovers of War #1,” she projects similar fates for civilians by cutting out their silhouettes and mounting the photo over a dark void. Her candid fatalism brings a stark Japanese character to her found photographs that seems perfectly matched to their formal self-presentation. 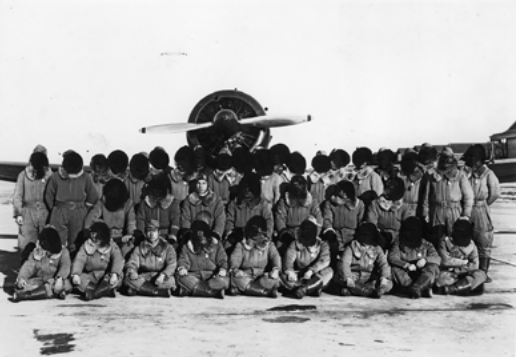 Quite a few of the works here utilize archival Ink-jet printing. Perhaps the most interesting in this context are Jim Frazer’s “Slanting Arcs,” in which he manipulates and mounts his prints in search of a stated metaphorical effect. Simply displaying a machine image in a way that doesn’t suggest an intention or an effect feels out of place in a show devoted to craft. Frazer’s “literal unfolding of a woodland panorama” makes for something the viewer can experiment with and manipulate in search of personal satisfaction. Also present are some captivating videos, like “Decay,” a group production rooted in dance but compellingly presenting one woman’s flight into interior consciousness. Sadly, space prohibits exploring them here.

Another medium that has returned to its roots here is textiles, which in avant-garde circles may be used to fill vast overhead spaces, like airports and convention centers. Sheryl Gillilan’s “Shades of Duality” and “Meditation: Letting Go” recall techniques like quilting, trapunto, and needlepoint sampler in a bravura display of textured designs, including both patterned fabric and too many stitching patterns to count. She sees these as metaphors for forms of thought, logic, argument and nuance that challenge our cerebral environment. And surely one of the deepest dives into lived experience takes place in Sara Lynne Lindsay’s “Knew They Would / Knew You Would Be Here,” in which she combines the annual growth rings of trees, a handmade and hand-dyed dress, calligraphy, an historical journal and one of the most original and evocative mountings to connect with one of her ancestors in a fashion as revealing as it is striking. 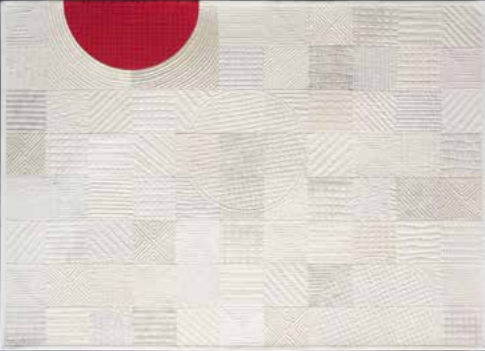 Crafts are the roots and foundations of the arts, and it’s important to periodically renew an acquaintance with the seemingly unlimited things they can do. As a community, we’re still recovering from the last few years, but here are some starts to dwell on.