Teresa Jordan’s The Year of Living Virtuously (Weekends Off): A Meditation on the Search for Meaning in an Ordinary Life 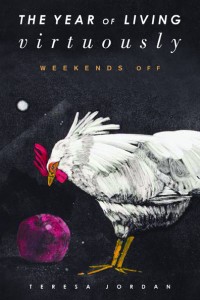 When, at the beginning of the New Year, the great separation occurs—I’m talking about the separation between the resolution makers and the resolution deniers—you’ll have to count me among the makers. I like the idea of a reassessment, a chance to reflect and set a different course. I was discussing this with some of my children on New Year’s Eve. They demonstrated what I take to be the current skepticism about this kind of resolve: many people feel that setting out on an ambitious course of change seems to set oneself up for failure, since, the wisdom goes, most people cast off their resolutions at the prospect of the first cheese plate, or in my case, potato chip bag.

A general self-assessing bent is but one of the reasons I have been enjoying reading Teresa Jordan’s book The Year of Living Virtuously (Weekends Off). She subtitles the book A Meditation on the Search for Meaning in an Ordinary Life; her method is a series of short essays, and she frames the architecture of the book on the dozen-plus-one virtues Benjamin Franklin set out for his own course of self-improvement in The Autobiography. Franklin was aiming for “moral perfection,” and one trope of his story is that he appeared to believe he could achieve what he called “a clean book.”

Jordan finds Franklin’s optimism and belief in his own self-efficacy to be inspiring. She situates her inquiry as an American project, seeing the values Franklin held—“an earnest desire not only to do good but to be good, coupled with a bemused acceptance of human frailty”—to be “quintessentially American.” The current state of America, factionalized and fractured, has in Jordan’s view displaced these values. So she takes up her meditation, hoping not for moral perfection but for mindfulness, hoping to clarify for herself, and for us along with her, what we mean when we talk about goodness, about virtue. And since she’s investigating virtue, she also takes on vice in the form of the deadly sins. She adds a few more virtues and vices to make a satisfying 40-something chapters.

Jordan originally wrote the pieces that appear in the book as posts on a blog. The pieces share an investigatory purpose, but otherwise stand quite nicely on their own. It’s a book you can pick up and put down and pick up again. But there’s a hum in that purpose that keeps the reader coming back. I liked the variety of sources Jordan assembles; each essay has its list of references at the back of the book.
The artfulness of her essays means that the source material is deftly and serendipitously woven. It’s as if the women poets of the range happened to live just around the corner from the Trappist monastery, and the Dalai Lama is chatting up Owen Wister and Jordan’s lively friend Laberta at a party thrown by a bunch of academic psychologists working in the field of forgiveness studies.

This dazzling source-weaving often works exceptionally well. The essay on pride, early in the book, begins with a memory from her very young childhood of working on the ranch alongside her father, an incident where she was able to contribute to the day’s success. She moves from here to cite Pope Gregory the Great and his codification of the seven deadly sins, to a witty and specific discussion of Bob Packwood, the diarist (and senator) who seemed not to understand that his frank record of his retrograde sexism, attitudes and actions, might get him into trouble. (Of course there was also the matter of political corruption.) This essay works very well, knitting together the mundane and the eloquent, and along the way it invites us to consider pride as manifesting in multiple ways, several of them positive.

The essay on gluttony is one of my favorites. Jordan tells what seems to be a fairly unassuming story about a vacation with friends who live in Mexico, where she sets herself the task of doing “experiential research on gluttony.” She considers the many ways our culture’s attitudes about food have become disordered, but these considerations punctuate what becomes an edible ramble through markets and restaurants and kitchens and ice cream stands and street carts. The journey of the essay is an enchantment, one that, at least for its duration, reminds us of the magic of what is simply delicious.

Jordan has many narrative and analytical moves at hand. If occasionally the essays rely on an overly familiar expression, a clichéd statement of a common belief, to set up the surprise of her new, arresting, sharp idea about the virtue or vice at hand, most often they do not, and the book is full of delights. The essays have the power to keep percolating in memory. Jordan consistently poses new ways of looking at things—keeping still as a kind of industriousness, or success in a creative life as, at least in part, being able to move through boredom—that open space for the reader’s own self-evaluation and contemplation. There’s a compassion, too, in her exploration of sin and vice. In the essay on greed, Jordan explores positional spending, citing economist Robert Frank who describes the phenomenon of spending money in order to secure even minimum social status. It’s hard to have compassion for grasping, venal greed, but Jordan helps us to arrive there.

Jordan’s book ends with a personal reflection on the evanescence of mindfulness and resolve—how easily life resumes its “customary busyness,” and how, therefore, old habits rather predictably reassert themselves. Even so, she suggests, it’s worth examining our choices, and choosing to practice mindfulness again and again. I recommend reading this book in short bursts, letting its various modalities have their moments, letting them linger in the mind. But mostly, I just recommend reading it, in whatever way makes sense to you. Jordan ranges widely and confidently through many worlds, with her humane voice making for a pilgrimage that is both searching and pragmatic. It’s a good book with which to start the year, or one with which to stop by the river to think about the journey thus far. 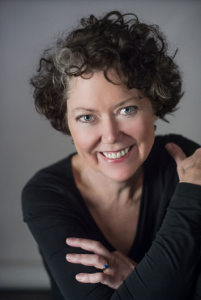 Teresa Jordan is an artist and author who grew up in a house full of books on an isolated ranch in Wyoming. The love of learning she acquired in the local one-room school carried her to Yale and into a lifetime of inquiry. Her books include the memoir Riding the White Horse Home and two illustrated journals, Fieldnotes from Yosemite: Apprentice to Place, and Field Notes from the Grand Canyon: Raging River, Quiet Mind. Her first book, Cowgirls: Women of the American West, was one of the earliest books to give voice to contemporary women working on the land.