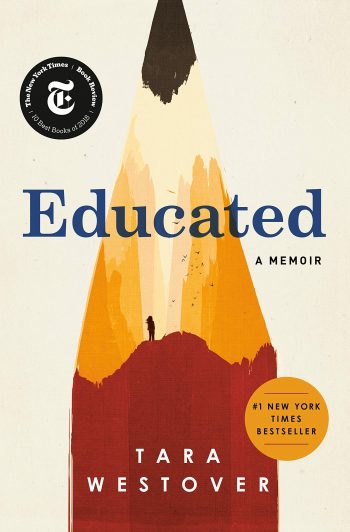 Educated is a marvel of a book, somehow thoroughly spirit-lifting despite being a fractured fairy tale of Beauty and the Beasts with dark purple bruises and broken bones and shattered hearts and minds and no real happily ever after for our Beauty; just life as we live it, but now done across the Pond, as they say. It’s a must-read of a reality lesson, related truthfully and brutally honestly. Reported, really. In words so simple yet so precise and elegant no reporter ever dreamed of using them. Well, maybe one or two I can think of. They won Pulitzers.

Our Beauty, Tara Westover, had no schooling to speak of growing up (“All that really matters,” her mother said to her when she was 8, “is that you kids learn to read. That other twaddle is just brainwashing.”), but won early admission and a scholarship to BYU after teaching herself enough from books used to homeschool her older siblings to pass the ACT (it took her two tries); a Gates Cambridge Scholarship to Trinity College in England and a visiting fellowship to Harvard followed. Then Westover found she couldn’t go home again and wondered, in the end, if she had won anything at all — except an education. (A superb one, it must be said.)

“She opened her mind and then she couldn’t put it back in,” is the way one reporter friend summed up Educated, Westover’s first-person narrative of growing up in Idaho, the youngest child in a large Mormon survivalist family during the era of Randy Weaver and Ruby Ridge, which only helps place things if you can recall that particular 1992 debacle in which the Feds shot Weaver after a standoff and then shot and killed the right-wing fundamentalist’s wife, 14-year-old son, and the family dog — an event that had a chilling impact on Tara’s already disturbed father, Gene (a pseudonym, as are many of the names in this nonfiction work), who had his five sons, two daughters and his wife immediately begin stocking their “head-for-the-hills” bags with rifles and ammo, military MRE’s, herbal medicines, water purifiers and the like. Even little Tara had a knife in the bag she slept with to be ready for the Feds when they came to Buck’s Peak.

Though the Mormon faith comes up frequently, “This story is not about Mormonism,” Westover states bluntly in an Author’s Note introducing her rich, finely detailed, and eminently readable memoir. (So readable it is difficult to review, because, in, say, looking up a quote, one is so easily caught up again in her vivid prose and captivating story that it’s hard returning to the task at hand.) “Neither is it about any other form of religious belief,” she continues. “In it there are many types of people, some believers, some not; some kind, some not. The author disputes any correlation, positive or negative, between the two.”

This is an essential point for potential readers in the Intermountain West to realize: Westover’s story is not in any way the same stuff that you’ve read in area newspapers or watched on reality television shows. She lived and rejected a lifestyle unique to her area of upbringing and to her father’s belief system; she loved her family fiercely and ultimately left her mountain home behind with a great and grieving reluctance. The Beasts were not only her increasingly violent older brother and disapproving father, but also her midwife mother and married sister, so the tormentors were equally distributed between sexes and role models. It was surely awful for her to be considered the spawn of Satan or whatever term they used to reference Tara in emails she happened upon on a trip home from England. And those were fear-inducing, as well; enough so to cause her to flee. (The only nagging issue about the scene that haunts her, that of being nearly drowned by a brother in the filthy family toilet bowl is why the toilet was so filthy with women available to clean it. But cleanliness was not next to godliness in the Westover household. Asked by the tidy grandmother who lived over-in-town why he didn’t teach his children to wash after using the toilet, Tara’s father replies: “I teach them not to piss on their hands.”)

When her father’s scrap-metal business begins suffering as his sons begin leaving — some to start their own businesses, a few to head off to college (giving his youngest daughter ideas she shouldn’t have gotten into her head), Tara is made to take their places in the scrap yard, a dangerous job for muscled young men and triply so for Tara. And ugly accidents do happen. But there will be no doctors for anyone. This is a family of faith healers and midwives, of prayer, not pills. It occurs to Tara, who like several of her siblings lacks a birth certificate and has never been to public school or seen a doctor, that if she were to die, no one would ever know and she redoubles her efforts to pass the ACT.

The outside world is a lonely and puzzling place for the 17-year-old. Her two LDS roommates in Provo are a bitter disappointment: one wears spaghetti-strapped pajama tops (!) around the apartment; the other goes grocery shopping on Sunday. These are things that violate Tara’s religious standards to such an extent that she stops speaking to the women she lives with, isolating herself even further on a campus she already needs guidance to survive on.

In an art class at BYU, Tara raises her hand to ask about an unfamiliar word in the description of a painting: Holocaust. The professor and students think she is making a joke in terribly poor taste, and she never dares to raise another question. She can’t make sense of her copy of Les Miserables: “I was unable to distinguish between the fictional story and the factual backdrop. Napoleon felt no more real to me than Jean Valjean. I had never heard of either.” She believes Europe is a country rather than a continent, knows nothing of slavery or the Civil Rights Movement, and generally feels like a buffoon. But she perseveres and very gradually cures her ignorance of many things we “educated” folk take for granted.

She earns her BA from BYU in 2008, at age 22, then an MPhil from Cambridge in 2009. While she is a visiting fellow at Harvard University in 2010, her now-wealthy parents (success in the herbalism business) fly out to visit for a week and a half and insist on staying with her in her cramped dorm room. They take her to Palmyra, New York, to visit the Sacred Grove, where the Mormon prophet Joseph Smith said God commanded him to found the true church. At the nearby temple, her father asks Tara to touch the wall and be saved. She looks closely at him and remembers words from Cervantes: “When life itself seems lunatic, who knows where madness lies?” Words she would write in journals and book margins for weeks.

Our Beauty went through a long period of madness herself after returning to Cambridge and time with her Beastly parents but ultimately recovered and was awarded a Ph.D. in history in 2014. Her thesis was titled: “The Family, Morality, and Social Science in Anglo-American Cooperative Thought, 1813-1890.” The chapter on Mormonism is her favorite, despite her fateful decision to reject her father’s faith. When she also turns down his patriarchal blessing, the Beasts pack immediately for their return flight to Idaho the following day and are gone within five minutes, deciding it is better to sleep on a bench overnight than to sleep with the devil. Our Beauty has not seen them since.

Tara Westover now lives in New York City and in England, though not in a castle because this, of course, is not a fairy tale.