Tanja London’s Save Your Own Skin The performance content of Save Your Own Skin is inspired by questions arising from a prototype of bulletproof skin and other ways that we attempt to shield ourselves from vulnerability. The collaborators of the work include Tanja London, Carloss Chamberlin, Jason Rabb, Nick Foster, Ami Hanna.

The thought exhibition was located in a small storefront of the Salt Lake City Public Library. Though the audience is limited to 20 people per performance, there were maybe half that many chairs at the premiere March 24. (The show ran through April 1.) People who arrived less early filled up the floor space near the chairs. The audience was hushed, and it didn’t feel appropriate to speak at more than a whisper.

Slowly, I realized the cool statue near the entrance was actually a live person, dancer and thinker Tanja London, covered in blue foam triangles, Velcro-ed together to resemble a sculpture by Xavier Veilhan.

It’s unclear at what moment the performance “began.” The fog machine went off three times with pauses in between each time. Then London twitched – or did she?

For a long time she barely moved. Gradually her movements became larger. They were stiff and ungraceful. Bit by bit, London broke through her costume, and of course was wearing nude clothing underneath. Nude costuming is commonly used in modern dance because it’s visually striking and because it suggests the ideas of natural, vulnerable, and human. This costume change said to me, “You’re more natural yet more vulnerable without the manmade things you surround yourself with.”

At some point within this first section of the performance, a thin bright blue line of light in the shape of a rhombus was cast across London’s scene. I felt this made this part of the experience less enjoyable, but maybe that was the intention.

Blue triangles shed, London ducked under and behind the sheer white fabric that decorates the space. She proceeded to press her way along the fabric stretched in front of the walls, interacting with it in a manner that seemed an expansion of a concept that Salt Lake City has recently seen from SB Dance, which they first showcased in their Wine Theater Food and Box Bar performances of early 2016.

Much of the audience had to move to different seating arrangements in order to get a view of London as she transitioned from section I to section II. There were great moments of quiet eye contact and smiles that seemed to say “modern dance, right?” and people scooting over to make room for others on the floor.

Emerging from behind the fabric, London’s quality of movement had, thankfully, changed from section I, to become more natural and attractive. In section II, London expressed vulnerability, wearing nude-colored clothing, fumbling with the thin ropes and carabiners that dangled from around her waist, asking the audience to help her with clipping the lines to various parts of the set, stumbling around within her skirt-turned-stage. It struck me as wonderful use of space as a collaborator, and a great way to involve the audience in the experience of vulnerability.

Vocal text accompanied London’s movement, in what is called by the performance’s program “a quote clash collage” including London’s own thoughts and quotes from 20 other sources. It covered a wide range of topics, all vaguely related. There were fragments about technological improvements, and war and security as their justifications, and lots of repetitions of ‘man-made.’

She asked us to consider “this” the “house of white supremacy,” and asked if we felt at home. Silent answer: um, no, not really, when you put it like that.

The ambient music began to seem more involved with the live dancer / speaker, at times echoing her words. Live musicians, Rabb and Foster, were attentive to London’s actions, glancing back and forth between her and the keys of their laptops and their unique percussive instruments while staying aware of each other’s cues.

Among their instruments was a fork-size rocking statue of a seahorse in a top hat, which at first rocked regularly, and I thought maybe it was a quirky metronome. Later, a percussion performer put what looked like a water glass beside it, so that the seahorse knocked into it making great clinking noises.

Also notable was what I will call a “tiny woodpecker with crazy hair” that a musician placed along the top of a thin rod, allowing it to vibrate and make quiet pecking noises as it slid down the rod. Really, I recommend making sure to go see these guys perform live. I hope they read my descriptive attempts and get a good laugh.

After allowing myself to be distracted by Rabb and Foster, I turned my attention back to London. She suggested that vulnerability is what has made humans “the dominant species” on Earth. I waited for an explanation, but she offered none directly. Instead, I thought about it some more after the show and realized that our attempts to make up for our vulnerability have driven much of our technological progress.

Interesting point. I like the idea that vulnerability drives us. But don’t many other species also have vulnerabilities, and also come up with ways to make up for them?

Throughout sections II and III, softer and less colorful light projections rolled across the dancer and set. These projections successfully added to the enthralling nature of the performance, and maybe to the sense of passing time and of complication.

Section III involved a costume change, and continuous interaction with an unexplained prop that looked like a clear blow-up doughnut with blue dots, about as tall as London’s shoulder height. She rolled around in the doughnut. She stood inside the doughnut and let her neck ooze/flop around, and her arms drape over the edges as she spoke — it was lovely.

Probably my favorite moment of the whole performance was when London lounged on top of the doughnut like a goddess and said “superiority!” in a manner of someone letting you in on a brilliant scheme or a joke that she knew you still didn’t quite get. She then folded in half, sinking through the doughnut hole.

Overall, Save Your Own Skin could be described as interesting, frustrating, and draining — as was likely the intention. The performance ended somewhat abruptly when London’s vocal text brought attention to the present, she released the doughnut, letting it roll and settle, and the lights went dark.

The small audience clapped for longer than politeness required as the lights came back on. London beamed, thanked us, and offered a Q&A session that she took longer to make good on than I was patient enough to wait. 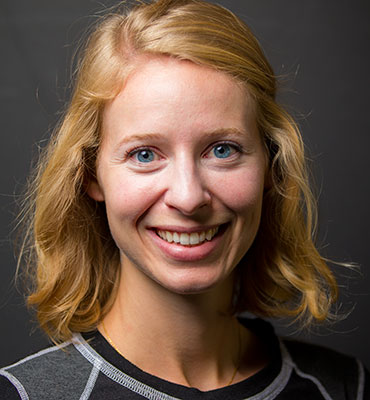