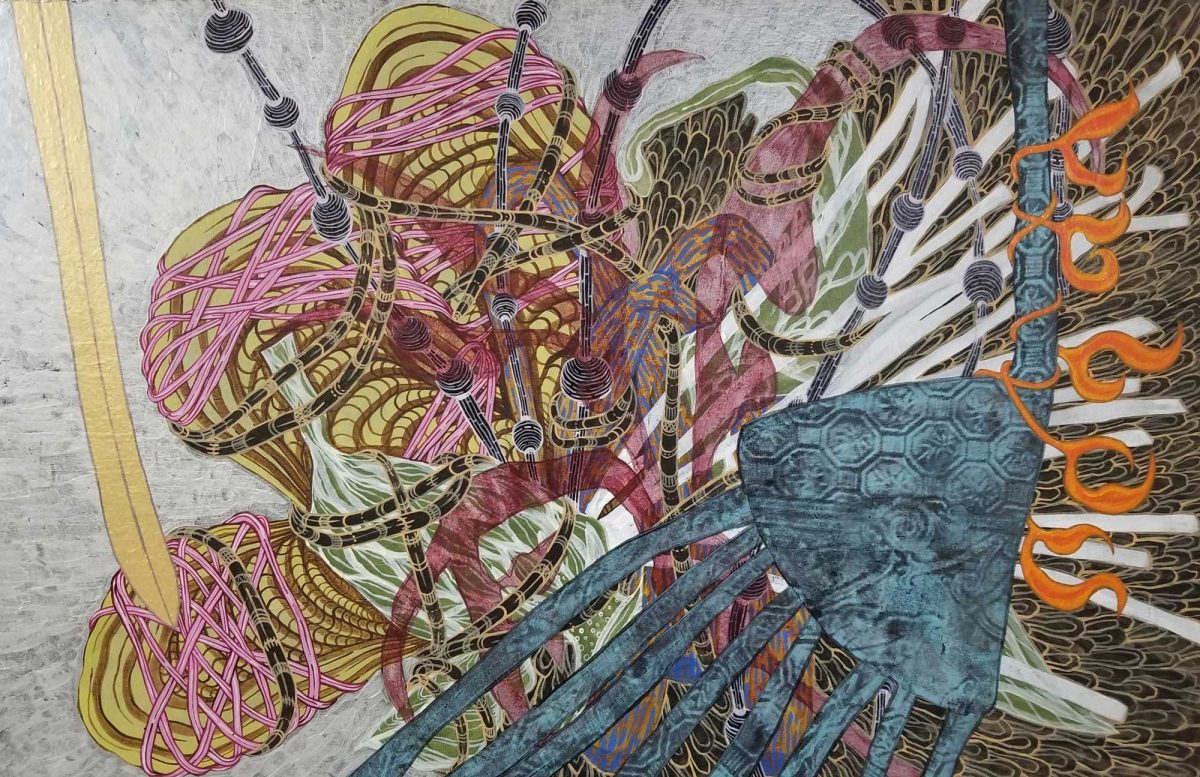 Twisted and overlapping tendrils cascade through Laura Sharp Wilson’s paintings like a jungle of vegetation and bright plastics. Overall, the painted forms resemble plants, however Wilson revels in intentional ambiguity, where the content of her paintings balances between being identifiable objects, abstracted botanics, and non-representational forms. These knotted nets of plants reside in decidedly flattened three-dimensional space — akin to synthetic cubist works from the early twentieth century — as if sandwiching each of these vignettes between glass slides before viewing under a microscope.

The title of the exhibition, Chiasma, is a term used in biology to describe a phenomenon that takes place during meiosis and mitosis wherein homologous chromosomes (genetic information from two parents) cross over and information is exchanged to produce genetic variation. This comes from chi, the Greek letter “X.” where two marks cross at the middle. This concept of intersection and hybridity is at the heart of this body of Wilson’s work. Styles, textures, patterns, palettes, and subjects collide within the walls of her mounted mulberry paper in a delightful chaos. Each painting is a patchwork of Wilson’s visual lexicon.

The paintings really shine when Wilson leans into this variety. The unpredictability from work to work and the level of detail keeps them visually interesting. “I’m Not Shooting Blanks” (2021) features a bright orange warp and waft of overlapping lines in the background to resemble a latticed grid of fabric. This layer of order stands in contrast to that in its neighbor, “Middle Aged Hot Rod” (2021), where ribbons of bubble-gum pink entangle earthy ochres and greens skinned in patterns derived from nature, textiles, and tiles. Washes of translucent mauve paint drape over the cluster as a reminder that these are paintings that do not have to follow representational rules. 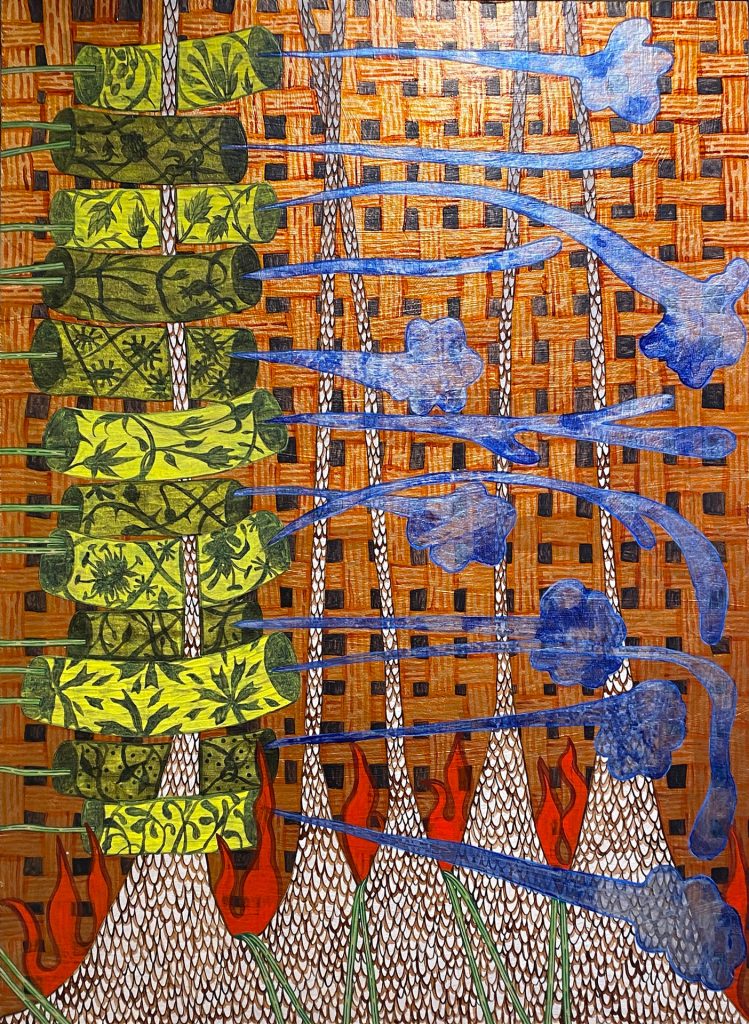 Nine of the twelve works in the exhibition feature these botanical tangles, while the remaining three revolve around another element that frequents Wilson’s works — ceramic vessels. Black and blue vases float in vacuous and spare fields of color with just a few plant sprigs jutting and drooping into frame. These paintings are the least congested of the group, and in some ways, less compelling. Within the context of the exhibition’s framework, the unhinged morass of forms in the other paintings are exciting and better fit the idea of a chiasma. These subdued works, although interesting in their own right, feel out of place.

The two largest panels, “Smoke Rings” (2009) and “Ring of Fire” (2009), depict tall blue vases floating in metallic silver and gold backgrounds, respectively. These works flank a shelf on which sits a fractured teacup nestled in a bowl atop a saucer. The crockery is translucent white with ultramarine blue floral patterns often seen in Chinese and Dutch ceramics. The patterns on the cup and saucer are similar but not identical to what is seen in the paintings. The physical dishes served as inspiration for Wilson, and their presence seem to function as support artifacts in a museum rather than organic to the exhibition. Because of the scale of the paintings, the singularity of the ceramic pieces, and the location at the middle of the featured wall, these pieces are the centerpiece of the exhibition, but are its least engaging elements. 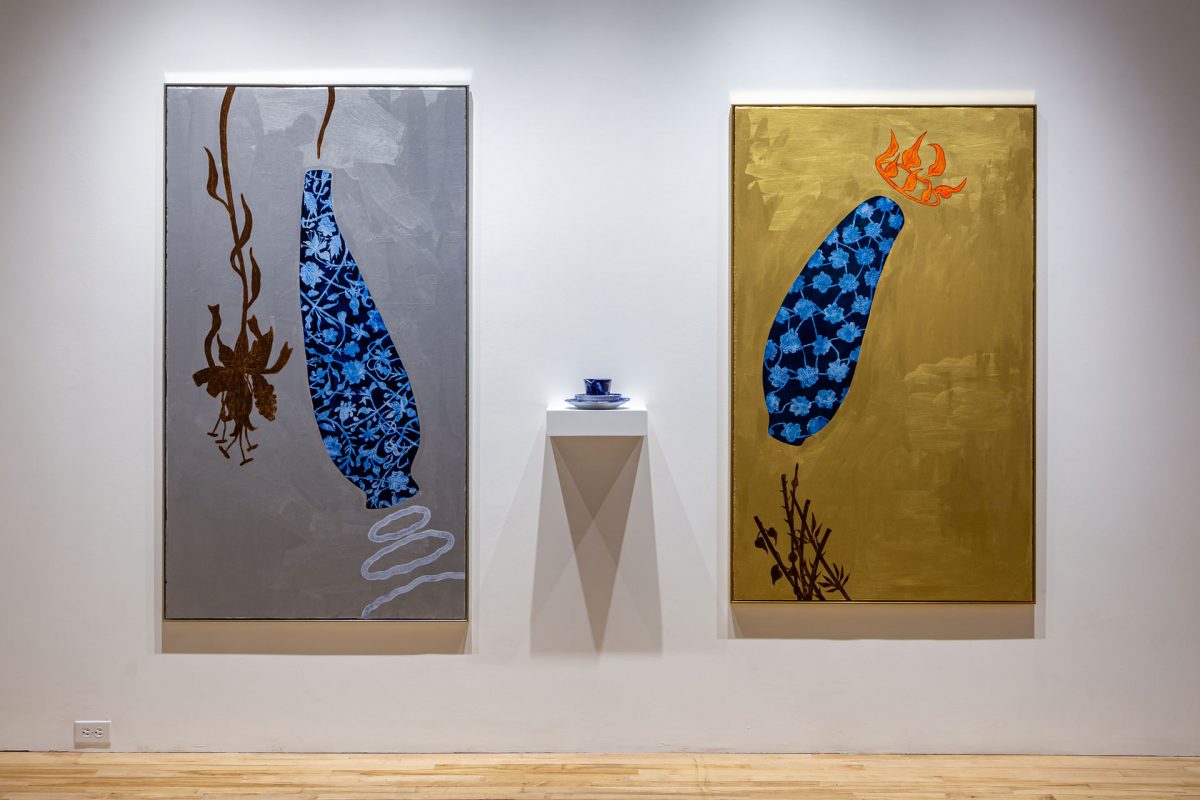 Since this work alludes to the sharing of genetic material, it is fitting to address aesthetic heritage. This body of work bears similarities to Amy Casey’s painted networks of roads, power lines, and forests; Susan Te Kahurangi King’s obsessive cacophony of patterns and characters; Jackson Pollock’s lacy webs of paint strands; Matthew Ritchie’s oversized representational microscopy; and Julie Mehretu’s whirlwinds of marks whipping across canvases and walls. Wilson’s chromosomal amalgam of conscious and unconscious inspirations leads her to her own territory that is compelling and striking.

Chiasma was curated by Scotti Hill, a Utah-based art critic, curator, and lawyer. Granary Arts’ modest upper gallery space calls for more focused bodies of work that allow for deeper contemplation of an artist’s work. In a larger venue that would allow for multiple bodies of art, displaying Laura Sharp Wilson’ multi-faceted output, this exhibition could easily grow into a mesmerizing immersion, and I hope to see such an undertaking. The show currently offers a tantalizing taste of Wilson’s abilities and ideas, and is worth a jaunt to Ephraim to experience.