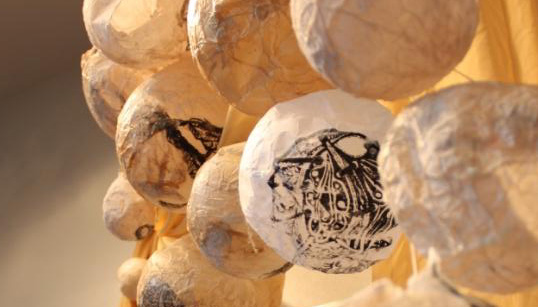 The answer on all counts, I can assure you, is “too long,” because going on now at the College of Eastern Utah’s Gallery East is one of the most exciting shows I’ve seen all year. Systemic Profilesbrings together installations from four Utah artists: Carrie Wardle, Randy Marsh, Steven Stradley and Barbara Frazier. The show runs through December 10, with a reception and artists’ talk on Friday, December 4 from 6:30 to 8 pm.

The artists bring varied backgrounds to the show, and the four installations present a rich variety in both form and concept.

Carrie Wardle graduated from Utah State University with a dual emphasis in printmaking and painting/drawing. She is currently pursuing a master’s degree at the State University of New York, at New Paltz. Her installation, “Chasin’ Ashes,” combines printmaking and sculpture to create a translucent piece with an airy, ethereal feel. Long, graceful curves of fabric flow in counterpoint to (and sometimes in conjunction with) translucent paper orbs, some floating, some attached to the wall, some resting on the ground. Wardle said her goal was to apply techniques learned in printmaking to create an installation. “The idea was to transform a flat surface into a three-dimensional form. I wanted to essentially figure out if I could mass produce and manipulate sculptural forms in the same way that I can with prints,” she said. 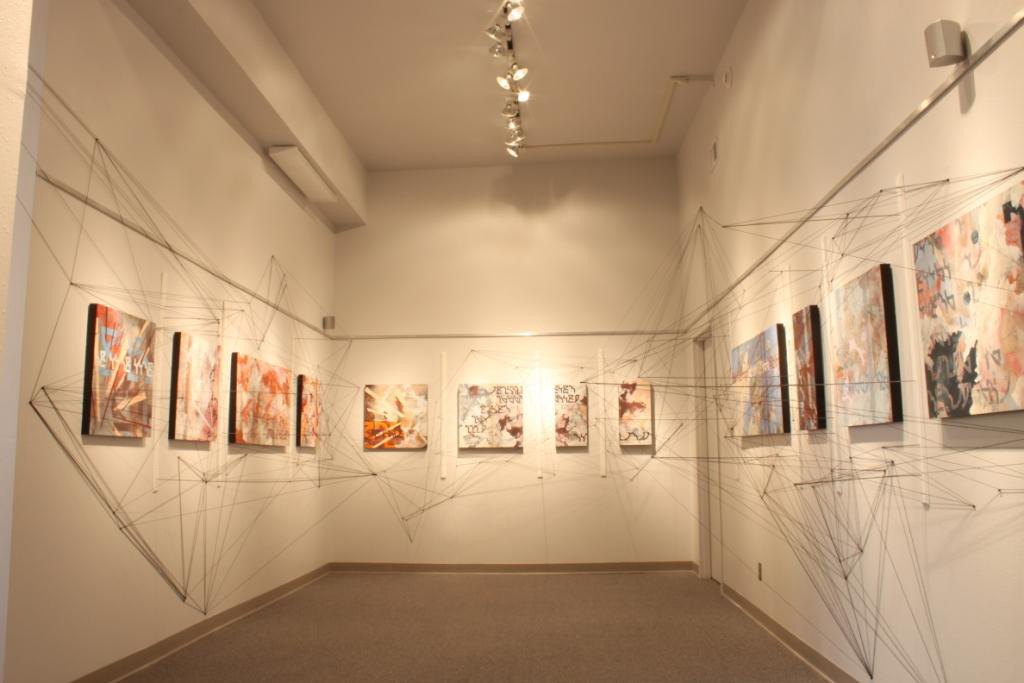 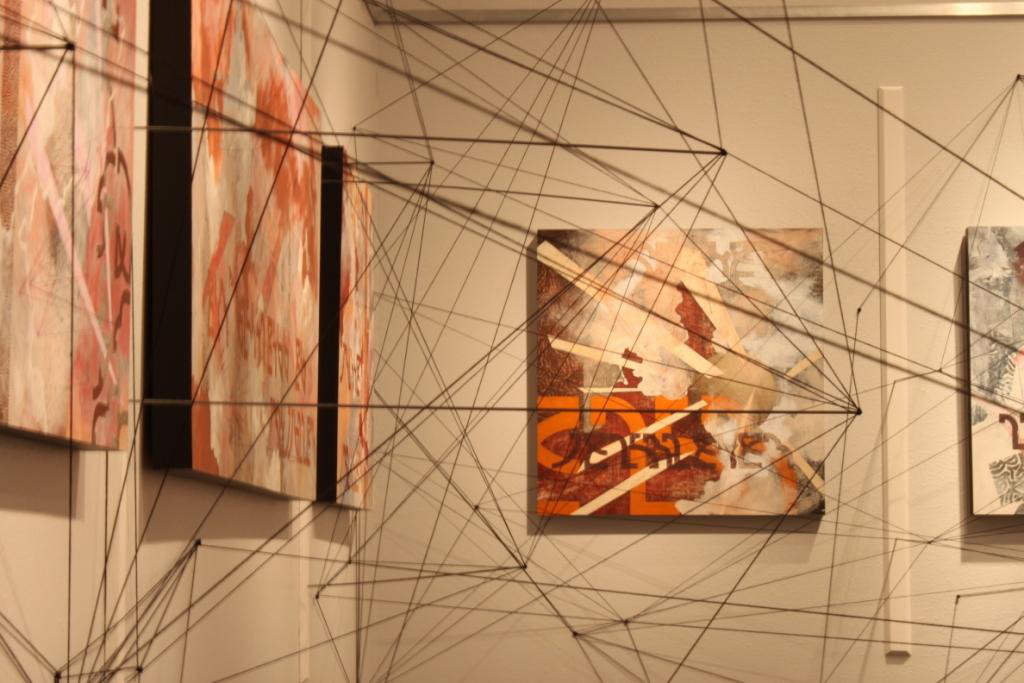 Randy Marsh received his BFA from Brigham Young University in 2007 and teaches art at Mountain Ridge Jr. High in Highland. His installation, “Gift Economy,” involves an interweaving of painting, sculpture and sound. He explains, “Twelve paintings wrap around three walls. A network of strings extends three-dimensionally away from the wall via steel rods. The strings intersect at points both on the wall and at the tips of the rods.” The sound element constantly plays in the background, and adds to the concept of the piece, which deals with the intersection between linguistics and economics. “The imagery in the paintings references location, language, textile and commerce. … The language is abstracted numbers that are predictive text,” Marsh said. “The sound piece includes both a reading of Wal-Mart stock values and the dial tones that result from text messages dealing with a gift economy.”

Steven Stradley received his BFA from Utah State University, and also teaches art at Mountain Ridge Jr. High. He has exhibited at numerous locations throughout Utah. Entitled “Degeneration/Regeneration,” Stradley’s installation explores multidimensional space, ranging from elements that lie flat against the wall, to multi-level paintings, to linear hanging structures. The separate elements hold together through a shared formal language. “There is an integration of elements from wall to painting to planar sculpture,” Stradley said. “This integration is a thematic element taking the form of organic linear structures. … These structures move from one plane to another.” The concept deals with what Stradley calls “system complexity.” “I wanted the viewer to enter a complex space and become engaged in a painting in a more spatial way,” he said. “I think of the whole work as painting, [but] three-dimensional. I also like the idea that the viewer becomes an introduced element in the painting that may affect the course that the system takes, or the visual perception that others have on the work.” 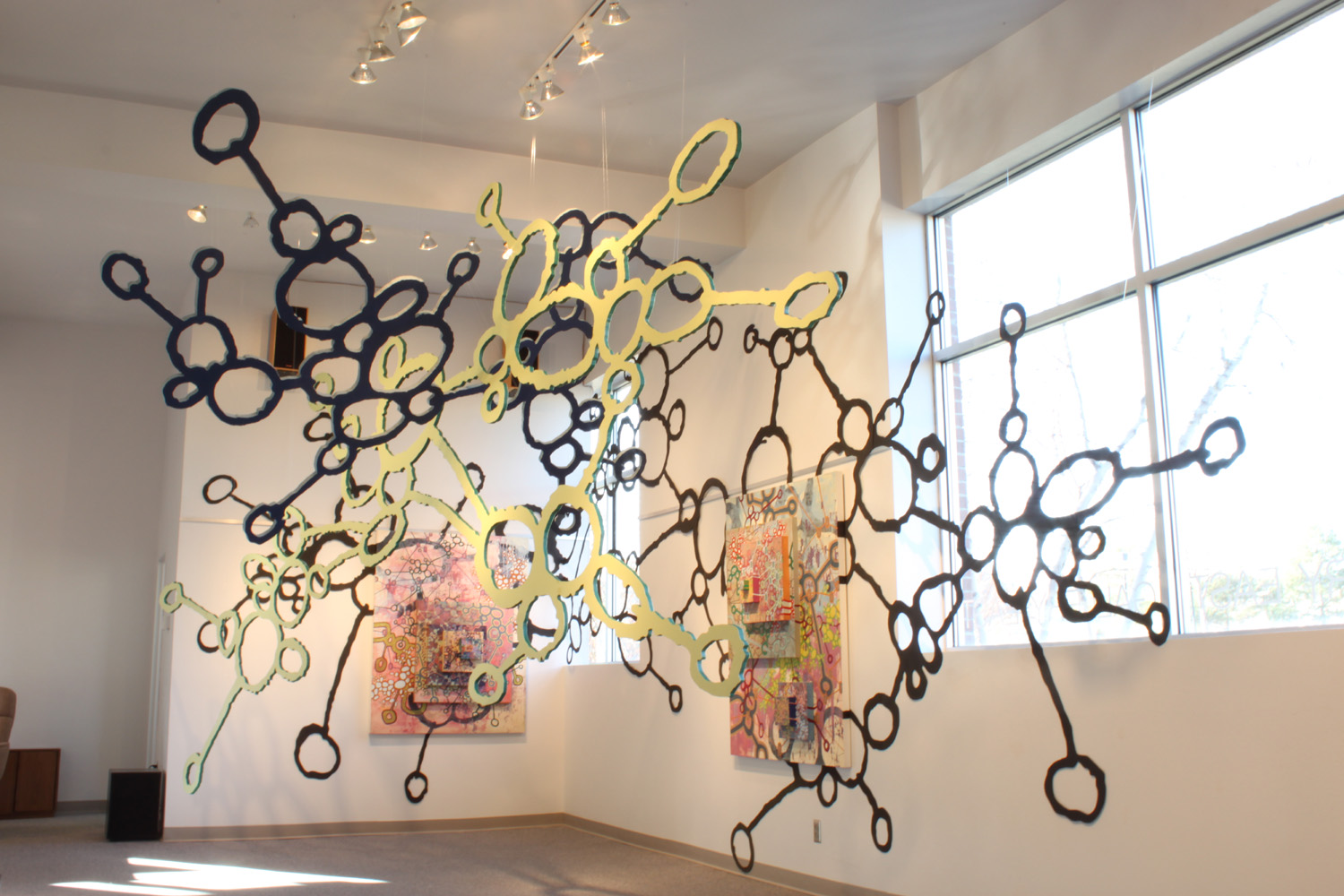 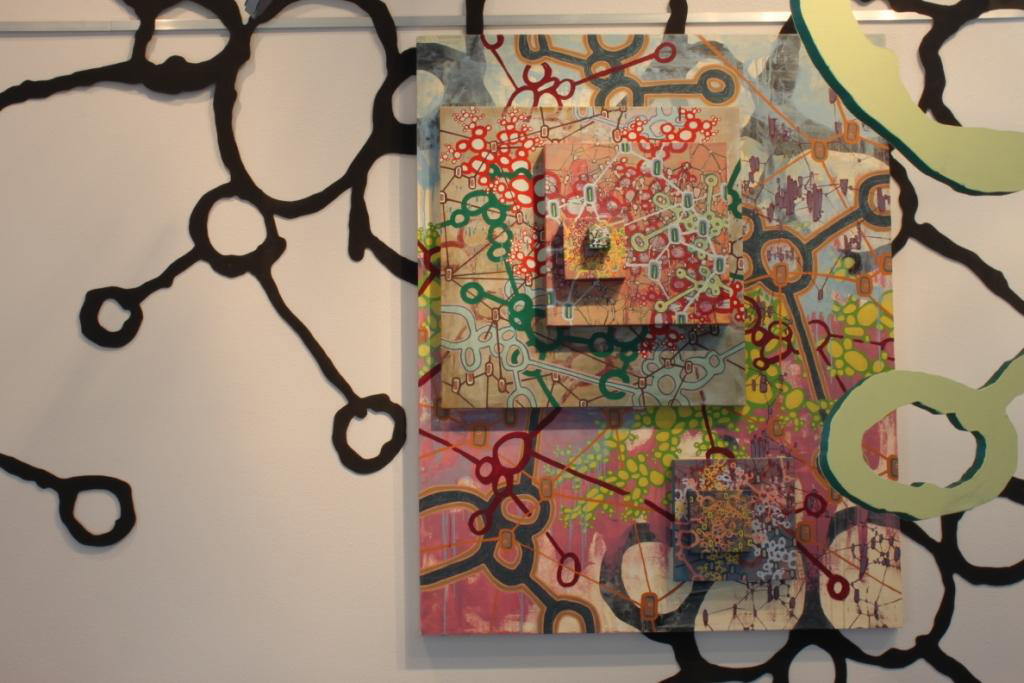 Barbara Frazier received her BFA from Utah Valley University and lectures in UVU’s Art Department. Frazier uses photography as a jumping-off point to create mixed media work. “I work with mixed media, collage and installation within photography,” she said. “Where I add, subtract, multiply and divide the materials and images, each action pulls me toward another viewpoint beyond that of the common photographic print.” In her installation, “Limbic Work,” quasi-silhouette photographic images of a female figure float in space, connected by long loops of metallic tubing. The concept of the work relates to memories and the physiology of the brain. “It represents the components of the limbic system, part of the brain which influences the formation of memory, a constellation of connections,” Frazier said. 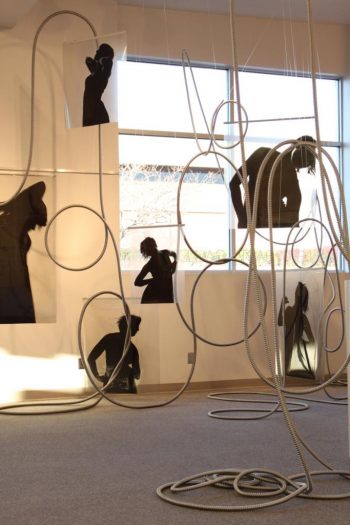 For some of the artists, this is their first foray into the world of installation, and it required the use of new materials and techniques. Marsh called working with sound “a whole new experience.” For Wardle, the challenge was creating three-dimensional work from two-dimensional prints. “There was a lot of experimenting that went into this process,” she said. “The printing part was easy. Shaping the paper proved to be a bit of a task. … It was all trial and error.” One challenge Wardle encountered was “trying to keep the piece translucent while making it rigid enough to form and mold.”

Another aspect of installation that all the artists encountered is its time-consuming nature. For some, the ideas alone have taken shape over the course of years, and the actual work on the pieces themselves took anywhere from several months to a year. Even the installation process itself requires considerable time — and often extra help. Stradley explained, “The onsite installation took about 49 man hours over the course of two full days.”

In contrast to most other art forms, the artist doesn’t actually see an installation until it’s set up in the space where it will show. This can be difficult for artists accustomed to looking at and responding to a piece as part of the creative process. “I wasn’t sure what the piece would look like installed, even though I had drawn many plans and made careful measurements and calculations,” Stradley said. “I just hoped that it would look somewhat similar to my vision for it.” 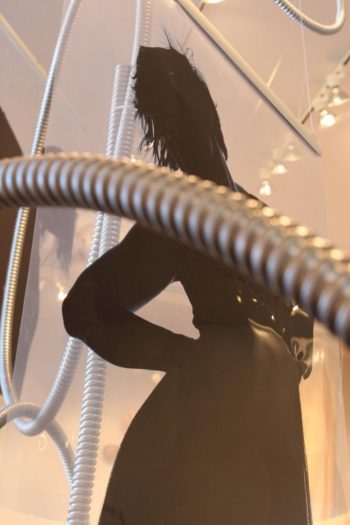 As with any work of art, there were some adjustments that had to be made, but in the end Stradley was pleased with the finished product. “The success that I felt upon installing is very encouraging,” he said. “I feel empowered to continue in this vein of work and continue to expand the complexity of the image and the space.”

Marsh is already thinking about his next project. “I love installation and I hope to do more,” he said. “I would like to do something that is more solid/dense/encompassing that can more effectively alter the space to create a new mental experience for the viewer.”

Systemic Profiles is at the College of Eastern Utah’s Gallery East through December 10. In addition to the December 4 reception, Gallery East is open Monday through Thursday from 11 a.m.–5 p.m. The exhibit is free and open to the public. For more information, contact the gallery at: 435-613-5327.