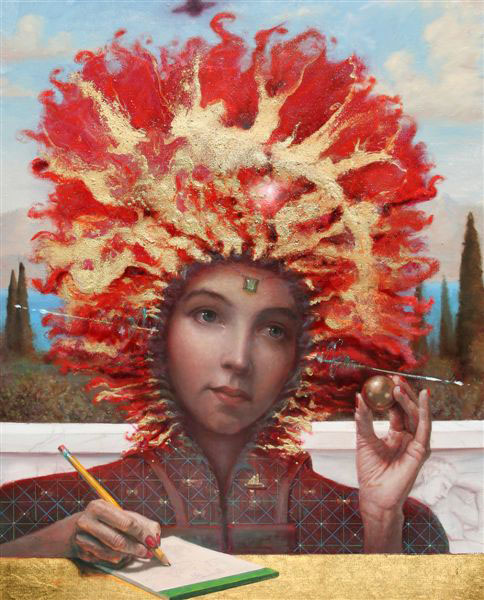 From his studio near Cedar City, painter Brian Hoover is continuing his journey into the realm of symbology with his current works, the “Girl With Fantastic Hat” series.

Hoover, a professor at Southern Utah University, has long played with and among the formal styles and motifs of Symbolist artists such as Gustave Moreau. Hoover’s earlier works often feature the central, vertical and looming human figure in statuary pose so prevalent in Symbolist paintings. The colors are luminous yet precise in a similarly informing Pre-Raphaelite tradition. They also share in the Elysian diaphanous quality of Maxfield Parrish, who shares a Pennsylvania connection with Hoover (who started his collegiate arts education in the Keystone State).

The “Girl With Fantastic Hat” series shares in all the above. Yet it seems a break from before — a break in its focus. In the “Fantastic Hat” paintings, Hoover centers in on the extreme upper torsos, heads, faces, and elaborate haberdashery of his fantastical subjects. He leaves the bodies below. There are two joined thrusts in these new portraits by Hoover — oblique yet solidly portraiture-formed signs and a swirling aether from where they might have come. 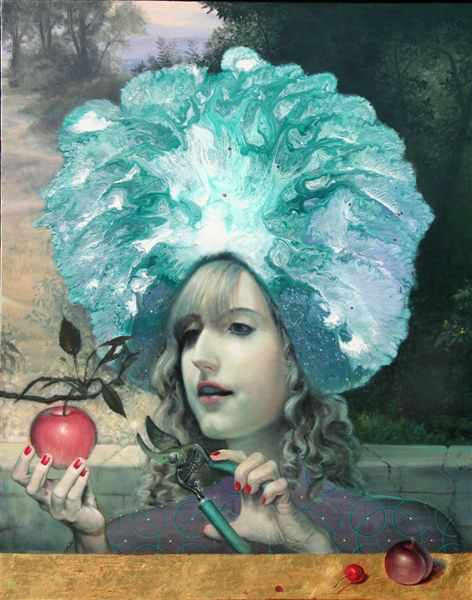 The symbols Hoover uses? They take the form of apples, shears, Monopoly game piece, serpent, divination bowl, writing pad and pencil, pendant, pearl necklace, starfish, and a priestly hand gesture … These items are from the tropes of classical painting imagery — quotidian yet loaded by tradition. The swirling aureoles? They are Hoover’s individual input.

According to Hoover, his “Girl With Fantastic Hat” series’ formal aspect grows out of his professorial life at SUU. He now teaches the art history that he missed out on in the ‘80s in graduate school, with the era’s concentration on strict modernism and post-modernism. Then, Hoover says, Symbolist and Pre-Raphaelite subjects weren’t covered in the textbooks he had to study. Hoover’s teaching of art history to his SUU students — his look back outside texts of a pedagogic era — has reinformed his formal painting style, articulation and technique. 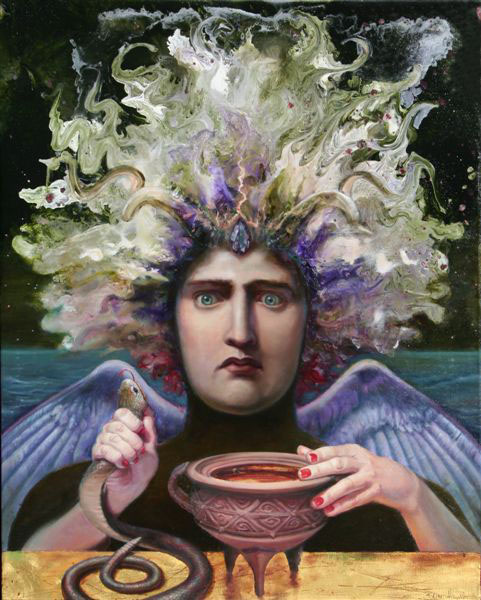 The second aspect of Hoover’s “Girl With Fantastic Hat” series, the new and wild aspect, is the swirling coronas that make the hats themselves. Hoover accomplishes these venous, wavy, fanning, spreading liquid penumbras with his splash technique –loosing loosely mixed pigments onto the canvas. It’s a method knowingly underpinned with the loss of chaos … Hoover says he comes in at 3 of 5 for useable canvases… gravity, viscosity and chance itself lose a few starts in the splash method.

Hoover says the splash portions of his paintings serve as Rorschach blot test examples of his psyche. Viewers might see something other. Sometimes, Hoover says, there’s more of him in those random splashes than he had expected. 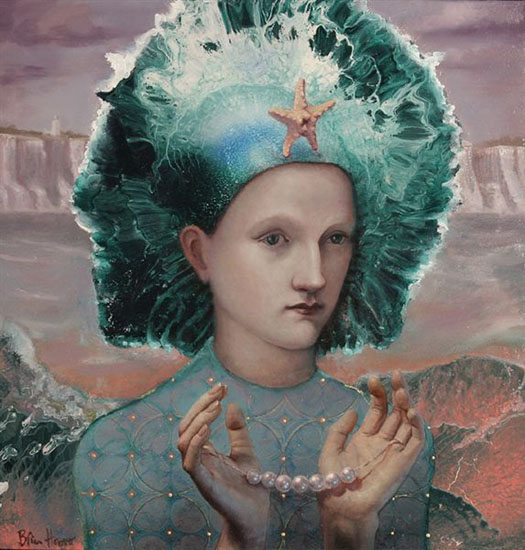 Hoover says the iconography in the “Girl With Fantastic Hat” series comes from a complementary place. It indicates some kind of background. This background of Hoover’s is more formal seeming — it’s baroque, hieratic and hermeneutic.

This isn’t common artistic terrain generally in southern Utah. Hoover’s signs and design are sometimes mistaken for some old, unknown Catholic aesthetic. Hoover, however, says the “Girl With Fantastic Hat” series is merely suggestive in its iconography. It comes from his subconscious and isn’t a laundry list of formal symbols of any regimen or rite.

It is symbolic, nonetheless… 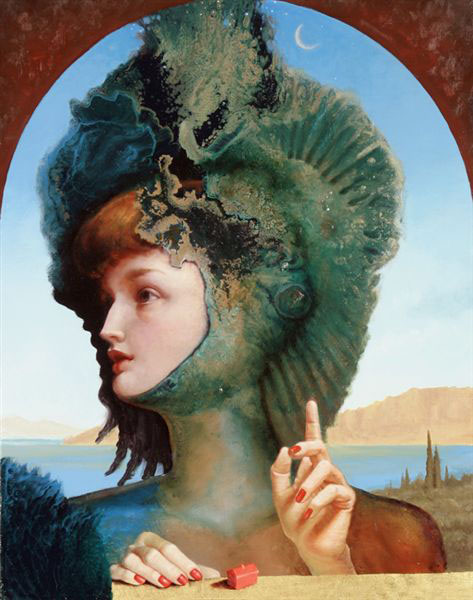 “Girl with Hat I”