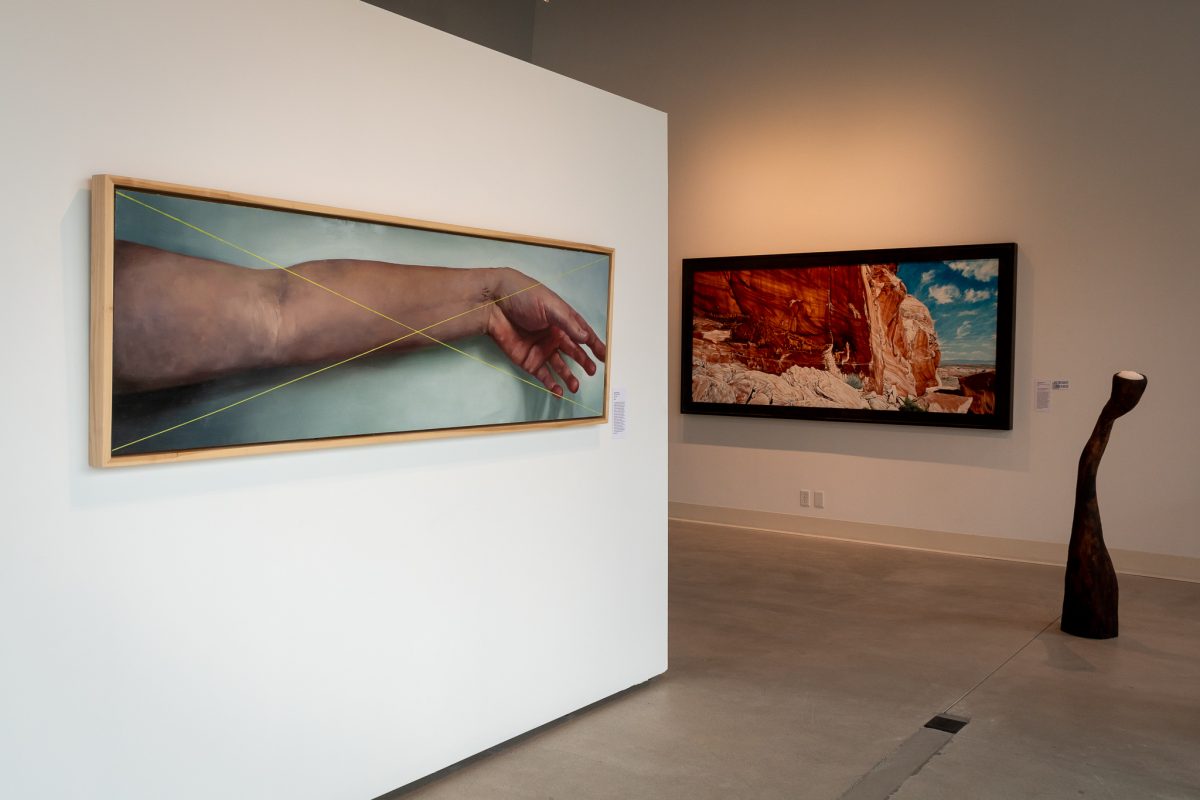 The largest work in Utah Arts & Museum’s Statewide Annual at Ogden Contemporary Arts is Cody Chamberlain’s “Procession,” an almost mural-sized, hyper-realistic depiction of a place somewhere in the vast Utah desert. It’s an accepted convention not to reveal the locations of rock art, for fear that if it becomes widely known it may be deliberately defaced, or otherwise damaged. Under a brilliant blue sky, laced with wisps of high-altitude clouds, “Procession” shows a vivid red rock wall, protected behind a defensive parapet of rugged white stone, on which can be seen an extensive array of petroglyphs. These pale images of sophisticated, mysterious, prehistoric art were made by laboriously grinding away the desert varnish, a dark coating of minerals washed over the rock surface during centuries of rare rainfalls, and are currently believed to have been nodes in the first people’s social network: places where they paused in their travels to leave behind messages, whether for each other or for themselves being uncertain. The painting must be so large in order to show the title feature, a procession of dozens, perhaps hundreds of tiny figures that appear to walk across the rock above the field of images spread out below. Without originally meaning to, today they recall one of the great mysteries of art history: the procession that winds its way around the Athenian Parthenon, carved reliefs mostly stolen by British imperialists that have become the poster child, so to speak, of the international movement to repatriate looted artworks to their places of origin.

In a sense, however, there are a pair of even larger works at OCA, which can be found in the meandering upper part of its modernistic use of space. Christopher Kanyusik’s “Proxy” and “Separate/Together” are conceptual giants despite their tiny physical dimensions. Each consists of a broken piece of stone that has been restored by matching its original form with molded plaster. At a time when authenticity is everywhere a quandary and the specter of DNA manipulation, even outright cloning, looms on the horizon, the eloquent example of these two stones says something new about an ancient thought problem, usually called the Ship of Theseus. Like that much-repaired ship, how much of anything can be replaced and have it still retain its identity? Which of the objects in “Separate/Together” is authentic, or are they both — and if so, how many times can this division be repeated before the original is lost? 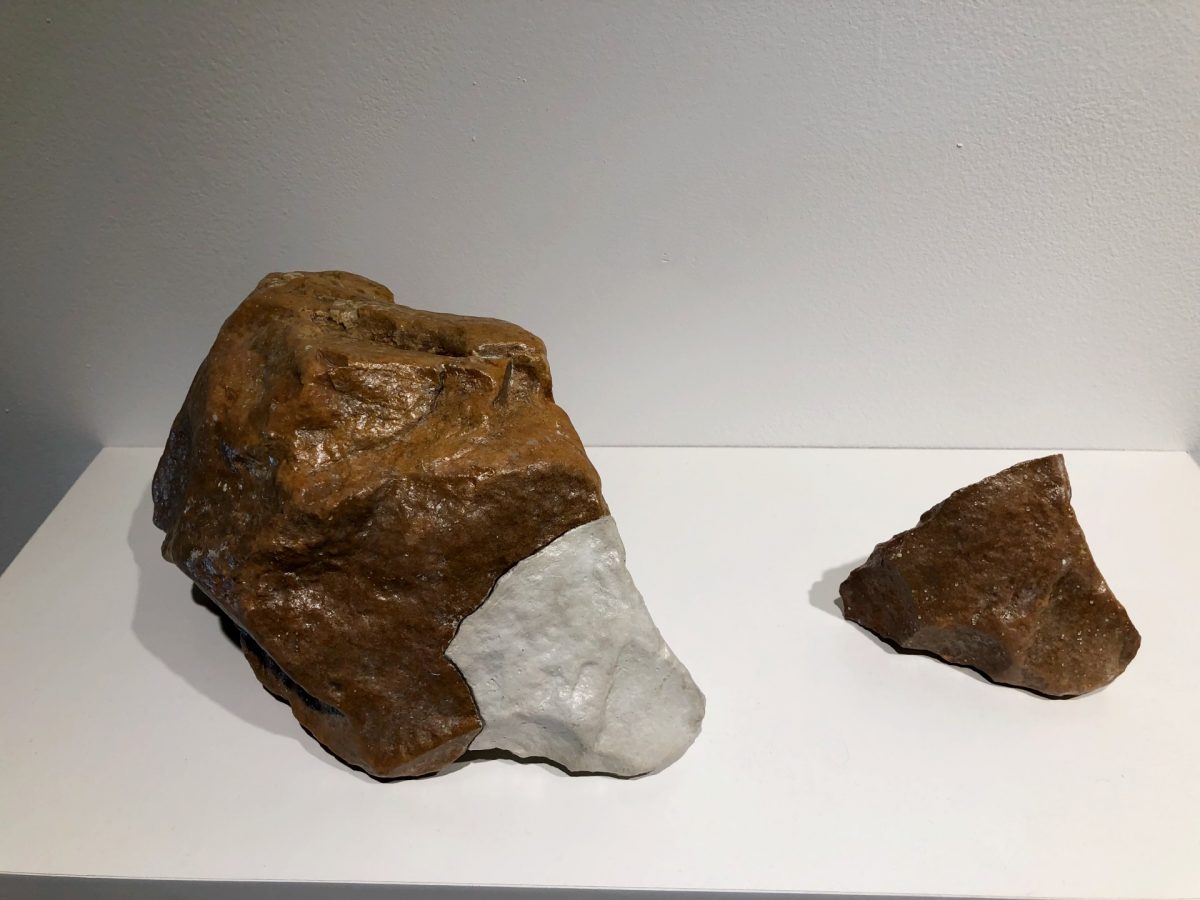 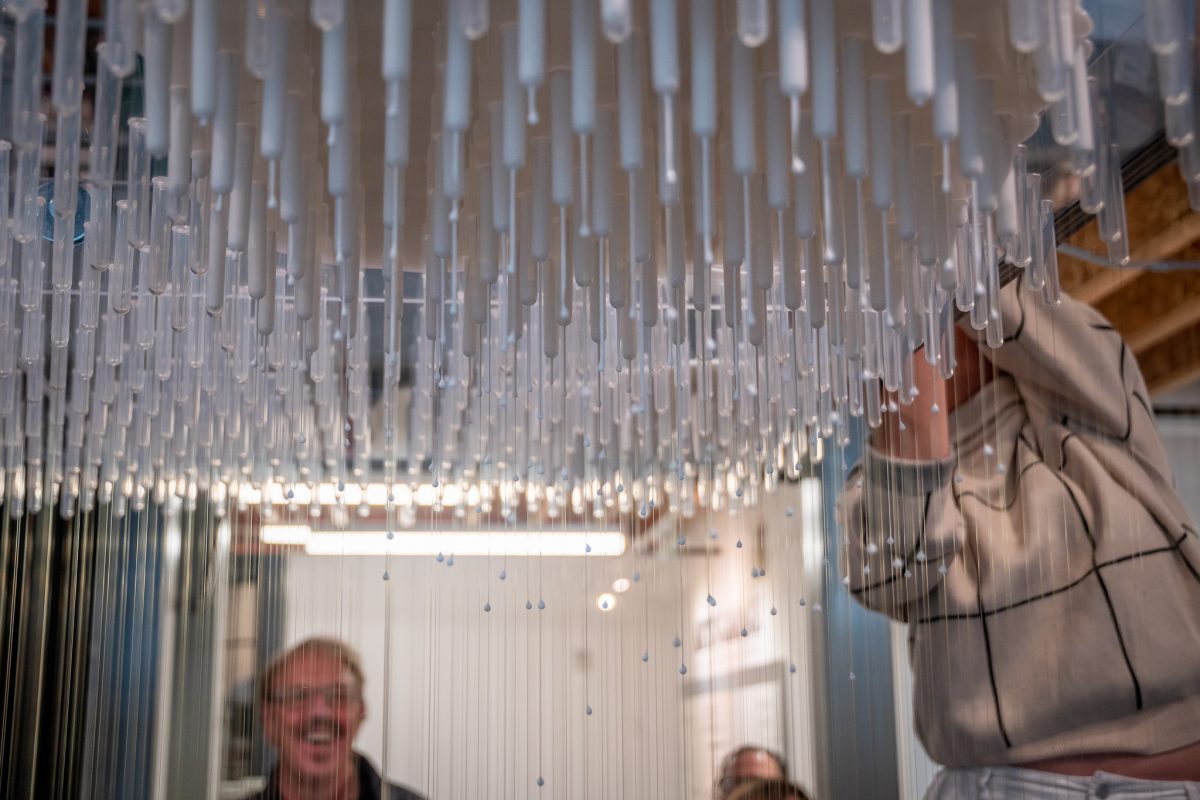 It’s often been suggested that philosophy is the proper realm of art, though it seems likely cognitive science has an equal claim. Someone whose seemingly challenging artworks have found a surprisingly ready audience might well agree. Stephanie Leitch’s “Milk Field” is another one of the large constructions she began making as a child, before she realized they could be art. Most of them have something to do with vertical motion, like controlled descent, and so deal with the great, baffling force at the center of everything: gravity. It’s possible to watch a work like “Milk Field,” which combines the attributes of an installation with those of a performance without exactly being either, and read the downward flow of something like honey, or a fluid likened to blood, or in this case, glue representing milk, as either spiritual, or physical, or for that matter, as like the quality of mercy, which in “The Merchant of Venice” Portia tells us “Is not strained; it droppeth as the gentle rain from heaven upon the place beneath. It is twice blessed — it blesseth him that gives, and him that takes.”

This year’s Statewide jurors, Ya La’ford and Anna Valdez, have done an impressive job in choosing artists whose works depart from the conventions of their techniques. Not all have invented a new medium, like Leitch, but they’ve all put something new on the wall, the pedestal, or in the case of Rocio Vasquez Cisneros, on the floor. Her series of six embroidered pillows may be the most inadvertently ill-timed art this year, given the recent connection between pillows and reactionary, anti-democratic politics, while its implications — that fetuses are sentient beings, that immigrants come here entirely by choice, and everyone who comes to America is happy to be here, are more inflammatory than she meant them to be. Yet her poetry, in which she witnesses and contemplates the uprooting and displacement of peoples, is deeply moving and her fundamental idea, that the place we lay our heads to rest and dream is as good a place for art as any, made “Mis Raíces” one of the more emotional experiences to be found in a gallery, even in a time of seemingly endless crises. 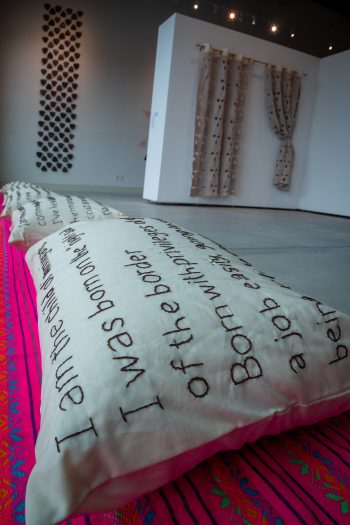 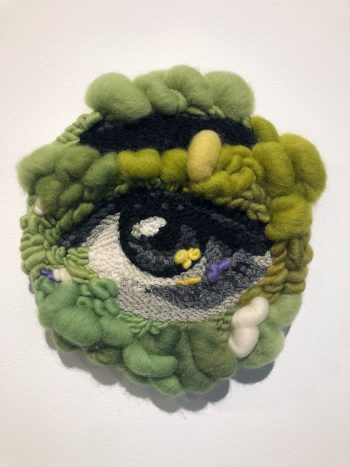 Sara Luna’s technique of turning punch needle embroidery into facial features that seem to come to life, even as they flirt with turning into vegetable nature, offers the viewer a feeling of reverie that becomes an invitation to join her in the power of art — which she rightly implies is accessible to everyone — to give a durable, communicable form to individual experiences. In her comments on “Summer,” she asserts that her work with textile fibers goes beyond the power of photographs in capturing what her senses capture, while in “What I Saw,” she considers the power of personal secrets and the danger that the eyes may give them away. Nearby, Shasta Krueger’s use of wood-fired stoneware makes a similar case for employing a complement of senses when exploring what may be discovered by any one of them. Her “Wall Composition #20,” based on the pattern of the trillium plant, makes a powerful case for greater tolerance of natural variation in an increasingly manufactured world. 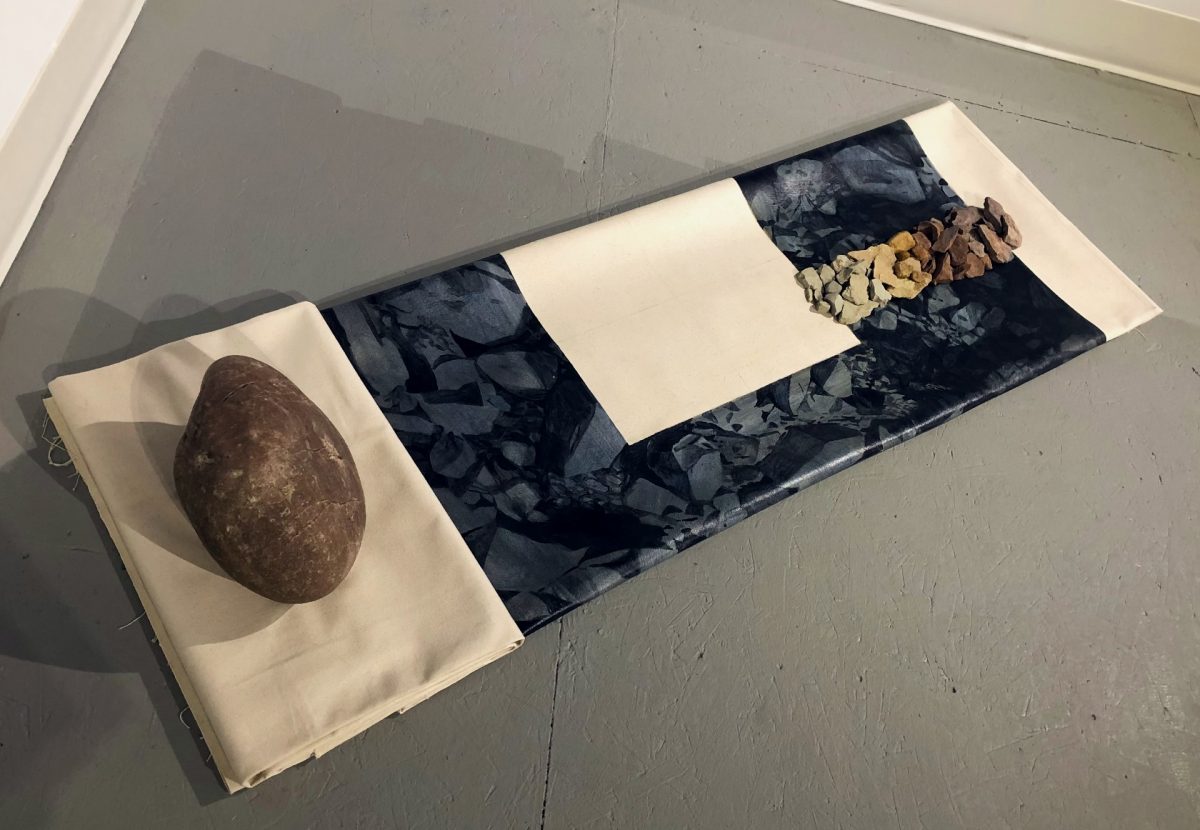 Painting remains arguably the most versatile and convincing medium in art, and in fact this year’s rotation of the Statewide foregrounds it, with fully half the artists employing paint in one form or another. One who exemplifies the drive for innovation is Ron Linn, whose “Folded Earth” contrasts the image of rocks on canvas with actual stones, including a bridge-like run across the canvas that recalls the Spiral Jetty. “Into/Out of Eden” uses an impasto technique, layout notes in pencil, and collage, possibly implied, to suggest the extemporaneous character of the climate crisis which, notwithstanding the voices of those who wish to minimize it by pretending it is nothing new, is in fact literally terra incognita, with all the life on Earth forced to find its way forward with no real experience to go on.

On a personal note, and as a general rule, I’d rather artists did not make statements about their art. Not that they’re not qualified: their opinion is every bit as valid as anyone else’s. But I prefer, as a wise man once urged me, to see the art through my own eyes first. But then there’s Douglas Tolman, whose statement and the work it introduces together brought a sting of tears to my eyes. “Last Gesture,” a title that could come true any day now, presents the image of a burned and tortured tree that reaches towards the viewer, extending a cup of pure, white salt from the once-great Salt Lake. The artist’s words that accompany it are an indictment, as much as is his sculpture. Small, modest, and unassuming, it may be the most potent object that can be found in a gallery full of art. 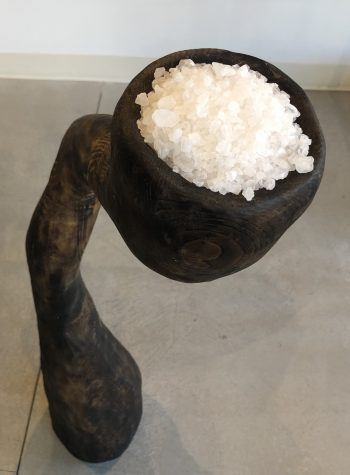 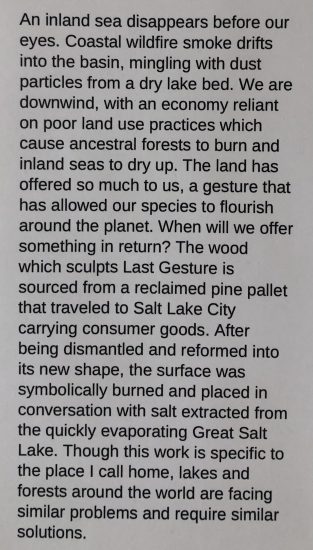