Suzanne Storer at The Gallery at Library Sqaure 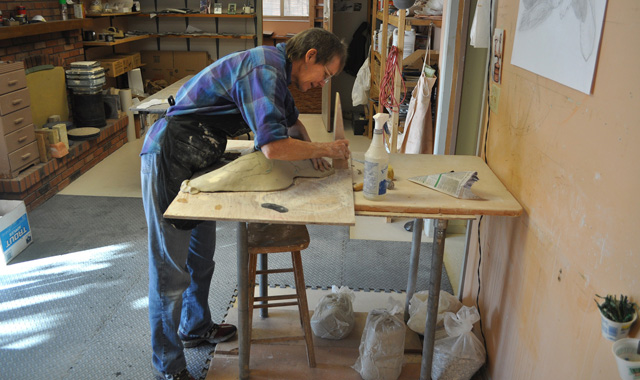 “My art stems from my innate desire to make connection with my fellow human beings,” says ceramicist Suzanne Storer. Working out of her Ogden studio, the potter turned sculptor creates uniquely definitive and characteristic wall sculpture. The line drawings that had previously graced her platters and functional pottery have become fully-rounded sculpture, to be viewed in the round or as high relief wall pieces. This move into the third-dimension has not, however, lessened her interest in the human qualities that energized the paintings on her ceramics. “Like a lot of artists,” she says, “I work alone in my studio and it’s very isolating. Maybe I work with the figure to be closer to other people.  Certainly drawing a nude model is a very intimate thing to do. And after intently looking at the person for 3 hours, they almost always appear beautiful to me—no matter what they look like. I believe in beauty and I like for it to get its due—especially people.  People talk about inner and outer beauty. I can’t distinguish the two.  It’s all one to me.”

In the nineteenth-century poet/art critic Charles Baudelaire called sculpture “boring.” Objects that can be approached from all angles, he suggested, fail to reveal an artistic point of view, a subjective vision of the world, unlike painting, which he described as “exclusive and despotic.” Driven by her desire to connect with her subjects, Storer’s work exists somewhere in between these two worlds. She has not chosen, as one might expect, the expressive symbolic medium of painting. But neither does she wish for a more autonomous, universal, birds- eye view. Hers is an intimate, one-on-one engagement, a direct result of her artistic process.

“I begin each work by looking at my model for an extended period of time while drawing a portion of their body always from a point of view that creates an interesting shape,” Storer says. “As a sculptor I’m drawing an object or form on a field, my paper. Mainly I just want the shape I draw to fit on the page. When it doesn’t I’ve got to tape on more paper. Since I know I’m drawing what will become a 3D sculpture the shape is the most important thing. I’m a sculptor and form matters most.”

As Storer moves from her initial drawings to create her sculptures, she must transcend the two-dimensional narrative plane of her subject. But that is easily done. What is the challenge for Storer is to make that transition while retaining all of those qualities that are encouraged in a two-dimensional subject to grant personality, character, uniqueness, and that have traditionally been found wanting in the objecthood of sculpture without a narrative or even a non-narrative structural support for meaning and responsiveness. In short, the benefits, or universal laws, of subjectivity must NOT be transcended in the process of going from two to three dimensions. How she does this in literal terms and not emphatically is through a methodology that might have been arrived at decisively but has the organic feel of a natural, fluent genesis and maturation by the artist.

To create an initial rendering articulated in exactitude, Storer employs the drafting system of measurements of thirds she has long utilized to create a harmonious, naturally-rendered figure. She relies heavily on the fundamental principle that the figure can, in all of its components, be broken down, or built up, by three points. Storer always starts with the same three on the face, from which any other three can be built upon and thus the body is successfully constructed. And this is only the beginning to the realization.

“Working in clay I add volume to this drawing,” she says. “I make what was once an illusion (a drawing) real because it now exists in three dimensions.  So working in high relief is perfect for me. Akio Takamori suggested I do so 3 years ago and I’m forever grateful to him.  And I chose this very foreshortened point of view because the entire triangular shape was interesting to me.”

Storer has carved her own niche as a sculptor and it is a very humanist one.  This humanism reveals her sitter’s maximum personality. As an ensemble, her works are a parade of the fascinating, made so through very unexpected compositional choices, most often made so through what appears to be the exaggerated or the maximized. But appearances can be deceiving, and the final structure, built upon the matrix of exacting and natural human lines created of thirds, with a uniquely chosen perspective, is constructed in ceramic form along those lines together with the use of proper perspective without any manipulation of exaggeration or maximization. Only the singularity of the “interesting shape,” derived from the original nude study, makes any kind of departure from these natural processes and the ultimate chosen angle of representation is something chosen for Storer’s “best” interpretation of that “interesting shape.”

Unlike traditional sculpture, these measurements that are exacting do not make allowances for objective three-dimensionality seen from all perspectives, nor for the two-dimensional planes that allow only for a fixed frontal point of view.  These are unusually and awkwardly beautiful, the kind of figure to be intensely studied and still have more to offer so much is the essence of their irresistible and likable personalities, a materialization of the “interesting shape” and perspective of it.

Storer’s work currently on exhibit at Salt Lake’s Gallery at Library Square is a definitive manifestation of this singular method that organically
results along the lines of natural principles to create the subjects
as such, and not the inverse. One may judge for themselves the
accuracy that supports each utterly distinctive vantage point of
special interest that can be any, from one that peers into the sitter
through an acutely foreshortening of the breast through the side of
the face, or up and close, examining the sitter starting from the nose
jutting out while at an angle.

All of the drama that is created by the traditional narrative or non-narrative based content, broken, once a two-dimensional representation becomes ruptured and the flat picture plane becomes object, in Storer’s case remains, and is retained as subjectivity for the works of the artist.  The process of the actual build commences from the base and from inside outward, delicately and with great finesse.  A “formal subjectivity,” a concept new in theory, is manifest according to natural laws and synergy of both two-dimensional precise accuracy of drawing and masterful expertise of skill in rendering perspectival accuracy in three-dimensional ceramics.

“Now line and shape combine with volume and all the other elements visual and tactile art can provide to make that connection as poignant as possible between artist and model and you, the viewer,” Storer says of her work.

Many artists and viewers see and connect with the personably ineffable and ineluctable charming individualities of each of Storer’s creations. One sees not only with the artist but one sees through her and feels through her. What Storer finds interesting about each of her subjects reveals the kind of artist and human being Suzanne Storer is. This choice is the very raison d’être of her exceptional efforts and the toilsome labor devoted to each subject, revealing great fragility and care, is weighty testimony of a uniquely impassioned creative artistic vision and perspective. Suzanne Storer’s exhibit People, Crows and Ravens is at The Gallery at Library Square in Salt Lake City through January 3, 2014. In addition to her figurative sculptural work, the exhibit features what Storer says are the last of her works as a potter. You can view more of the artist’s work at suzannestorer.com.