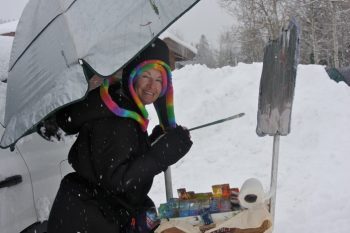 What happens when you sign a contract – with yourself – to produce an ambitious quantity of work in a year? It’s positively life changing, as Midway artist Susette Gertsch will tell you.

On a meandering painting trip through Europe in 2009, Gertsch stopped in the UK to paint with Jon Hall (a.k.a. “Suncage”), a plein air artist whose work she had admired online. It was he who introduced her to the notion of a “limner contract” and encouraged her to take the challenge.

A “limner,” Gertsch explains, was a skilled illustrator of manuscripts in medieval Europe. Later, in 19th- century America, the term was applied to mostly self-taught painters of portraits and landscapes who traveled from town to town, finding subjects along the way and selling the work to the local populace. Hall’s 21st-century contract idea combines this itinerant tradition with a personal artistic challenge.

After a great deal of thought, and balancing the “possible” with the “challenging,” Gertsch settled on the details of her contract. Starting on September 1, 2009, she would paint 300 plein air paintings in a year and document them in a blog, including photographs of her location, her equipment, and passersby. Now, with only three months left to go in the contract, Gertsch can tell you the benefits, frustrations, and unexpected joys of holding one’s creative self accountable for both process and productivity — much of which will be on exhibition at Midway Town Hall in June.

Like those limners of old, Gertsch wanders the countryside to find her subjects. Unlike her predecessors, she is highly trained and highly skilled, having earned B.A. and M.F.A. degrees from BYU, and having taught art in high schools in Australia and Salt Lake City for many years. But all of that training cannot compare to the lessons she’s learned (and is still learning) since 9/1/09. 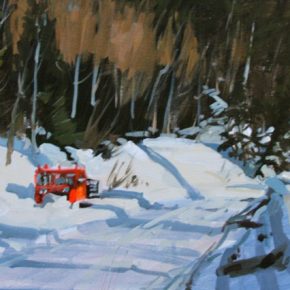 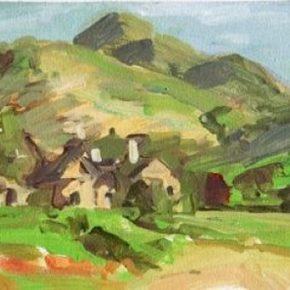 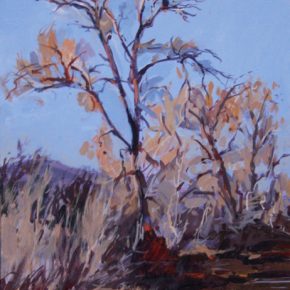 As a warm-up to her project, Gertsch first challenged herself to do twenty-four 15-minute paintings. Knowing that she has a tendency to get lost in details, this exercise forced her to quickly identify shapes and values to capture the essence of the scene. As a second warm-up, she painted fifteen 24-minute paintings. In this series, she had time for more information in the paintings, but still too little time to fiddle with a lot of detail.

Loaded with new confidence, and plenty of equipment, she took on the big challenge – 300 paintings in 365 days – painting in nearly all weather conditions (except lightning), and all outside, with only a large umbrella for shelter. Let the learning begin!

Paints, for example. Both acrylics and oils have their own benefits and challenges. “The advantage of the acrylics,” says Gertsch, “is that you can put the painting in the car immediately and not worry about wet paint. It also allows adjustments as the light changes. But sometimes the stroke of paint dries as I lay it down. I’ve learned to paint with a spray bottle in one hand and a paint brush in the other.”

Gertsch also has experimented with different mediums to keep her oils fluid in cold weather, and even improvised a heating element (Styrofoam topped with a heated gel pack) underneath the palette.

Painting in temperatures as cold as 17 degrees called for creative adaptations of clothing, too. Gertsch fashioned a head-to-toe suit from waffle-looking foam (think mattress topper) between layers of fabric used for athletic gear. Calling it her Michelin suit, Gertsch’s improvised outfit includes pants, top, hat, and booties. When it’s windy, she tops it with a windbreaker. Her car, she says, serves as a wardrobe, with several different layers of clothing she can put on or take off as the weather changes. 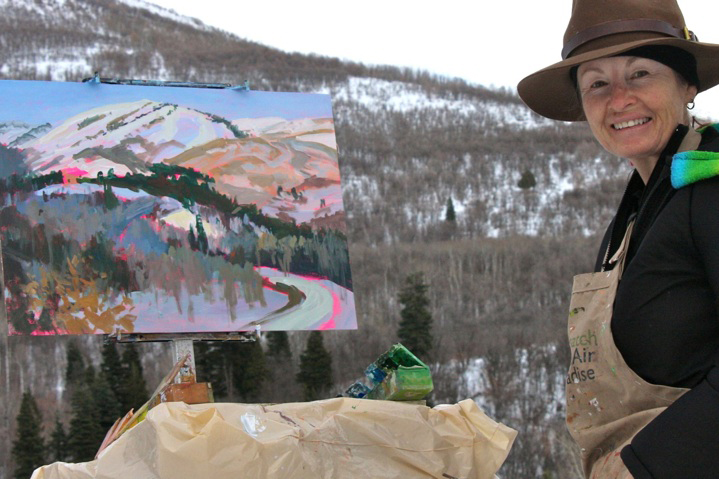 If all this sounds terribly uncomfortable and inconvenient, Gertsch will quickly list the benefits she has experienced fulfilling her contract. “I’ve learned so much about myself as a woman,” she says. “And I’ve learned so much about nature. My sense of color has developed far from what it was.” Artistic growth has also come from just getting out there nearly every day. “A lot like ‘butt in chair days for writers,’” says Gertsch. “There’s a discipline that you can’t get other ways.”

Joys include encounters with nature and with people. One of her favorite moments was a day painting near the Provo River in 20 inches of snow. Across the river in a tall tree perched a bald eagle. As she painted, the bird swooped down and flew up the river, soon returning with lunch, which he took back to his tree perch to eat. 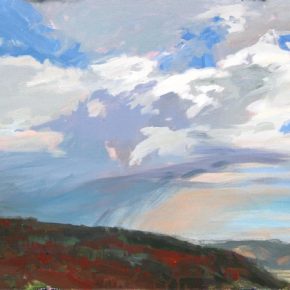 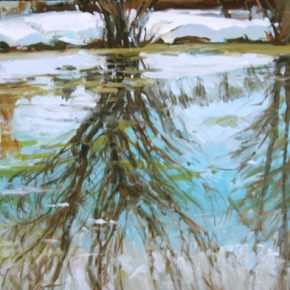 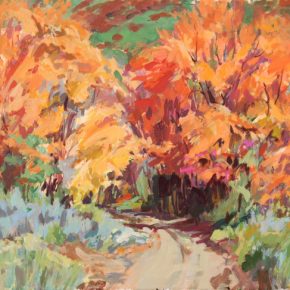 She’s learned to welcome the occasional passerby and engage in conversation as she paints. She even invites them to take up the brush and add a stroke or two to the painting.|5| As they do that, she takes their photograph to post on her blog. (Gertsch’s marketing tip: give them a card and invite them to visit your site to see their picture and the finished painting. It could easily result in a sale as well as more traffic to the web site/blog.)

Gertsch refers to her plein air work as “sketches,” but the average size is 16 x 24 inches, with some as large as 30 x 40 inches. Her painting time ranges from 90 minutes to as long as seven hours; three and a half hours is about average. While some may appear sketchy, others have that fresh but finished appeal of plein air work. “One painting,” she recalls, “was almost like a haiku poem; not as many strokes as other paintings. It’s simple, almost abstract, but it’s complete.” She resists any impulse to add finishing touches in the studio. 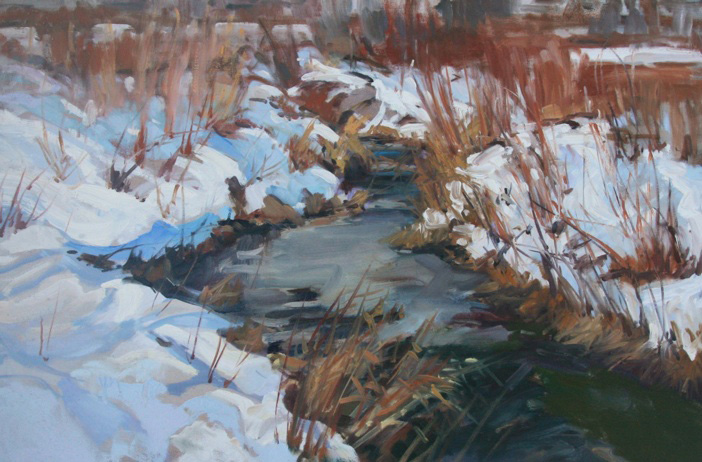 Painting #96, painted on January 20 and titled “Wild Turkey Day,” was accepted into the Spring Salon at the Springville Museum of Art.

As Gertsch anticipates the exhibition of her first 10 months of work, she’s faced with the challenge of displaying it. Will she show it all or only select pieces? Will she frame them, or display them another way? The exhibit will open on June 25, the eve of the Wasatch Plein Air Paradise competition and exhibition, an event she has helped plan as president of the Midway Art Association.

Gertsch will also have a booth at the Park City Arts Festival in August, with even more project progress to show. 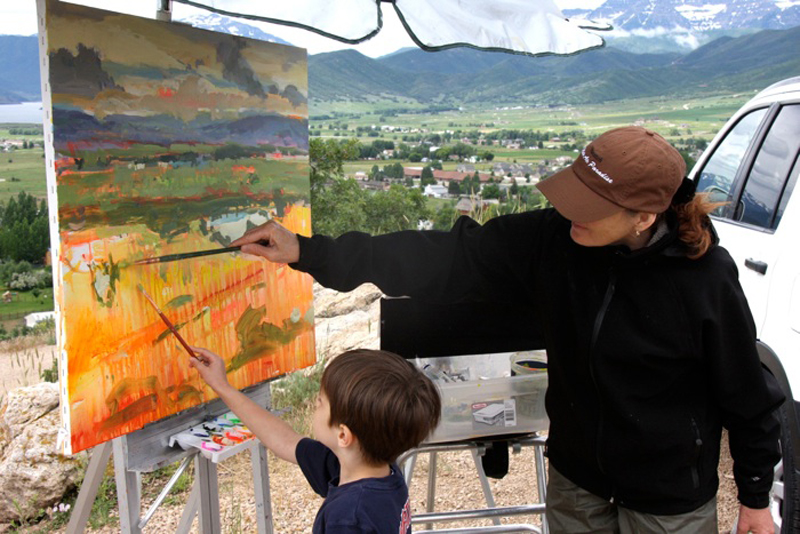 What advice does she have for artists interested in creating their own creative contract? Gertsch offers these tips:

1. Get clear about what you want to accomplish. Set a goal that is ambitious but won’t kill you.
2. Find a friend who will do a similar contract or who will mentor you through the tough times (and there are tough times!). Suncage has served as mentor and cheerleader for Gertsch, always there via email or blog, even though he’s thousands of miles away.

And for those embarking on a plein air contract, she offers additional tips:

3. “Read my blog.” (http://www.themidwayartist.com) From start to finish (ultimately 300 entries), the blog contains details about what works and doesn’t work, specifically in the arid Utah climate.
4. Take a class from one of the many fine plein air painters in Utah (Google “Plein Air Painters of Utah).
5. “Just get out there. Work small. Take limited colors and a few brushes.”
6. Design your own warm-up contracts. “Hide these warm-up paintings under your bed and don’t look at them until you complete your contract. You’ll be amazed at your progress.”

What’s next for Gertsch once this contract is complete? “I may do a contract with myself to do figure or portrait paintings, though I might not do 300. The important thing is making a commitment to myself and following through. I really want to see how far I can go. I want to get as much mileage out of my life as possible. This has been the best thing I could do for myself.”