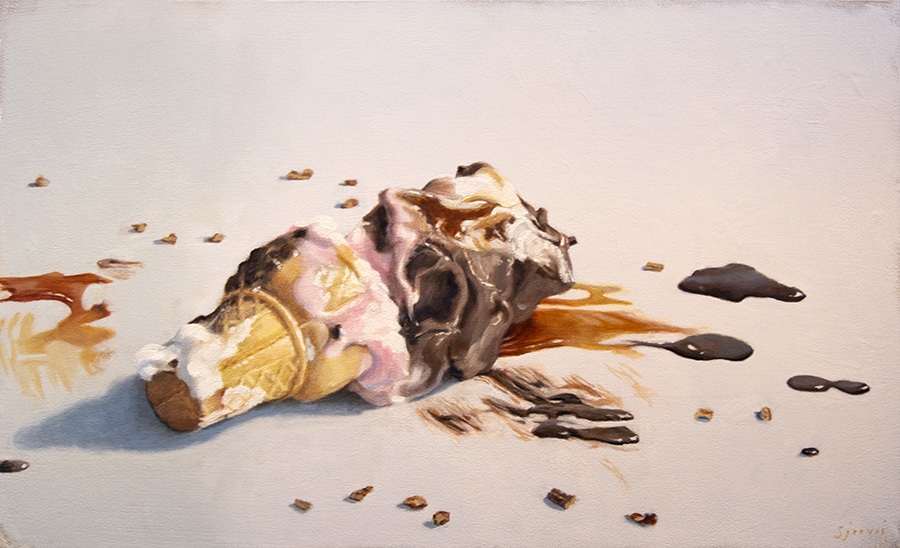 It’s as if a mad chef split an enormous cooking gallery into all round bowls and pans and rolling pins on one side; on the other, angular cutting boards, trays, rectangle and square pans. “Brights, sweets, for you,” he cries to Susan Jarvis the painter. “Darkness, depth,” he cries to multimedia artist Darryl Erdmann.

They get to work.

In Susan Jarvis’s paintings there’s creamy realism, a pursuit of happiness found in lavishly painted food-objects, carefully timed and baked breads and confections and scooped ice cream — the pinks and tans an almost mockingly worshipful recording of American treats (icons, really, of our childhoods, what our parents gave us to make us happy). 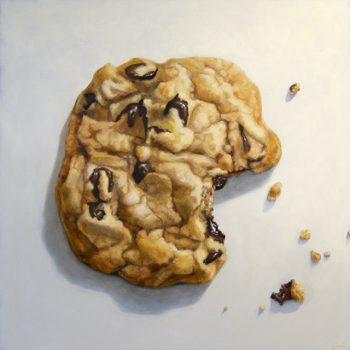 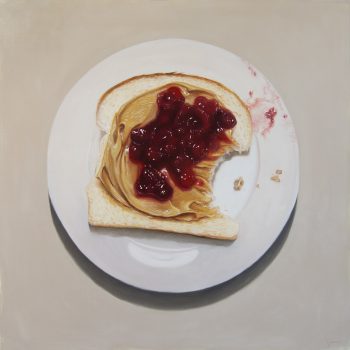 Looking at her huge oil painting of a cookie (chocolate chip, each fallen morsel near its rough bite line creamily gray-shadowed) you smell semiliquid Tollhouse morsels; to stop smelling that semi-bitter you must look away from “Quality Check” and think of something else. Jarvis refuses to shadow here with that wavering thin ultramarine blue used by Wayne Thiebaud in his exquisite paintings of food, and popular with many others. There is more emphasis on the subject in Jarvis’s paintings, raising high sweetness of colors on her canvases even — if it is possible — higher.

Peanut butter apparently was meant for oil paint; so is the startlingly red cherry jam atop the peanut butter on the slice of bread, both in a painting by Jarvis as large as a tabletop for four, entitled “Over the Moon.” And so are, again and again, ice creams: an almost religiously recorded banana split and one deluxe ice cream cone fallen hard to the floor (coolly titled “Gravity”). Everything — curved sundae glassware, tops of bread, one interrupted perfect circle of single cake doughnut — is round or almost round; puzzles completed or easily completable. They contain all except the devourer. 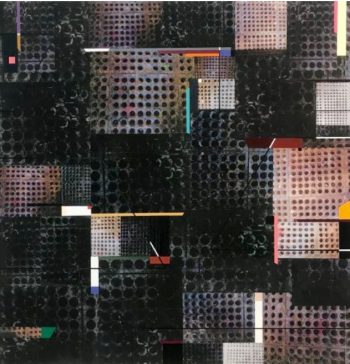 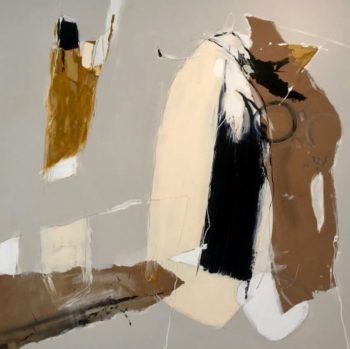 In Erdmann’s much darker, much more angular paintings there is an intense refusal to completely finish any puzzle: he asks you to finish it, in your mind, yourself. If you can. Lines drop and dance in “Uncontrollable Dilemma,” “Crosswalk,” and “Cycles.”

Somberness, with one exception, rules Erdmann’s multimedia pieces. It would be wonderful in this age of court-ruled families to see all paintings addressing the anguish containable in the simple, cold title “Visitation Rights,” the very word “visitation” reminding one that a visit to wholeness is never quite possible for a family ruled by lawyers and contract. This painting is, as one might expect, a dark mass of extractions: something glumly less than the sum of its (former) parts. 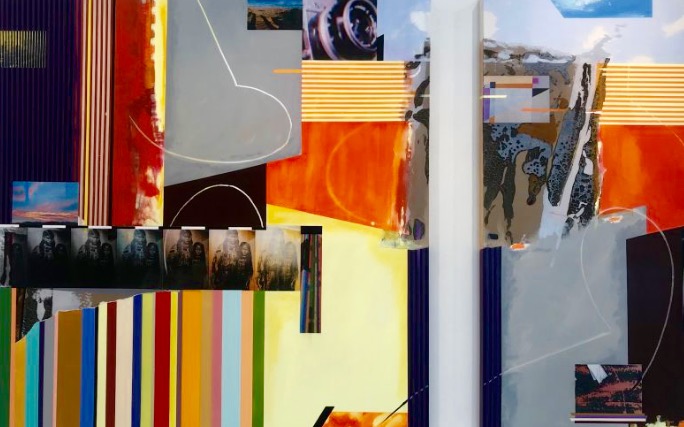 Another piece, “Territories,” evokes a similar patchwork of grief, faces of two long-ago American Indian children, clearly miserable, that image repeated over and over in a stumbling line, as if a person is blinking fast to make it go away. Revisitation is the theme of another piece, one tree photographed again and again, each time, seemingly, in many costumes — of color, weather, season. The tree suggests, most of all, something at the mercy of its context. 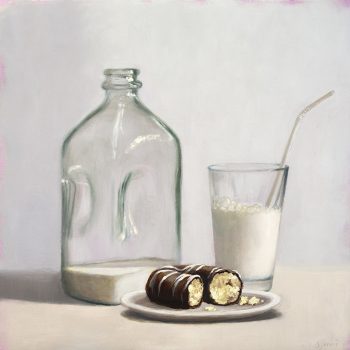 Each artist has one work which is at odds with their other works. The work of melancholy by Jarvis is “Midnight Snack” — a small, lovely painting which contains a small and humble doughnut. An initial bite has revealed a startling daffodilian yellow on the inside, dark chocolate on the outside, a melancholy display of glass vessels around it, the tallest an almost-empty glass milk bottle, its glass as green and gray and melancholy as still water in a boggy and humid place.

And Erdmann, the king of darkness here, has that one which is bright and promising and sweet. Like a bright spear in the midst of the other works is one extremely simple three-dimensional piece, “Modern Miracle Allusion” — a two-by-four, 8 feet tall, canvas wrapped around it, painted with one controlled lozenge after another of brilliant unflickering, unmodulated color — a lonely, cubist ski. Set in the midst of Erdmann’s other work, its crisp tension rules the large room, as if a gauntlet thrown down by the artist. In its over-brightness, the title is really brightly, blackly skeptical. But it tries. Its colors steadily bright, as if programmed, its repetitions too steady, it’s an almost robotic prismatic display of everlasting and almost electric hope.

Somehow these two works meet: the artists’ confessions that in all darkness there is bright, and in all brightness there is the recurring, inevitable reminder of shadow.