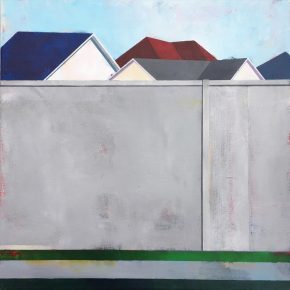 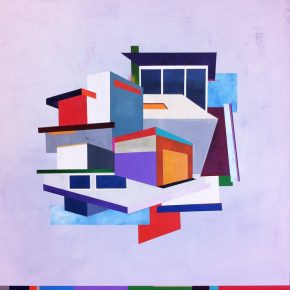 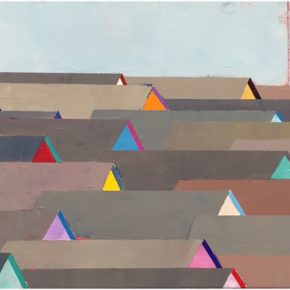 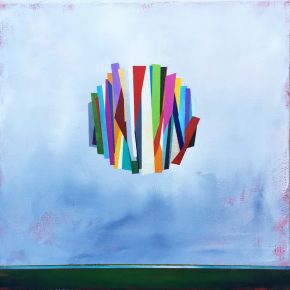 “It’s about suburbia,” says Justin Wheatley of his newest work, on view beginning this week at Salt Lake’s 15th Street Gallery. “Suburbia is loaded with kitsch, we’re all living in this kitschy world where we try to make things look nice or beautiful or wonderful, but in reality, a lot of the times, its fake.  It’s not always fake, but a lot of the times it’s just a facade. A stucco facade.”

In previous works, Wheatley focused mostly on individual buildings, and usually in a sympathetic manner; but this new work is about the collective and the critique is more acute, the insinuations more astute. A repeating pattern of nondescript roofs, like we see in “It’s all a façade,” is a motif that appears in many of these works. “The Great Wall of Friendly Grove” is the kind of scene one can see driving any major thoroughfare in Utah (and in so many other places just like it across the United States): a tall wall blocks the view of everything but the ever-repeating slopes of roofs in a planned community. But one must question, are the walls here meant to protect, or to hide?

The claustrophobia of  “Huddling Within Walls,” is an obvious reference to the disharmony that may occur within the well-intentioned harmony of the master-planned community on many levels, be they social, environmental, economic, political, or religious.  It can be a jungle out there in these pre-fabricated living environments, according to Wheatley.

Even the more chic communities come under his brush’s scrutiny. “It’s a mess,” he says of Salt Lake Valley’s Daybreak community, built on top of a tailings pond from Kennecott Copper Mine.  “First of all, it’s all stucco, but it’s all villages, one is supposed to be a Cape Cod architecture, and then there’s little cottages, and then there’s horrible condos, and they’re all brought together in this big mess, and it’s like the Truman Show.” In “Deconstructing Daybreak,” large structures in the sky are about to be dropped, with no rhyme or reason, on top of a large surface, this amounting to the rationality of Daybreak, for Wheatley.

But Wheatley is no activist and says, “I’m just as much a part of it. Maybe I would live in Daybreak if I had the opportunity to buy a house there. I don’t know. It’s like making fun of myself. It’s making fun of our society, while at the same time being a little ashamed of it. How long can we sustain it?’”

Perhaps his answer is found in “Something About the Modern Community,” an amalgamation of clean modernist homes floating in the sky. But this 20th-century utopia is more an ironic than any kind of literal statement for him.  The castle- in-the-sky mentality may be a lingering dream for some, but perhaps the best part of Wheatley is found in his down-to-earth honesty and willingness to accept his role in his own reality, and to not remove himself when questioning and opening minds, while always being open about his personal supporting role in the absurdity of it all.  For assuredly, as soon as the laughter stops, then the battle is lost.