Survival, art making, and beyond . . .
by Geoff Wichert 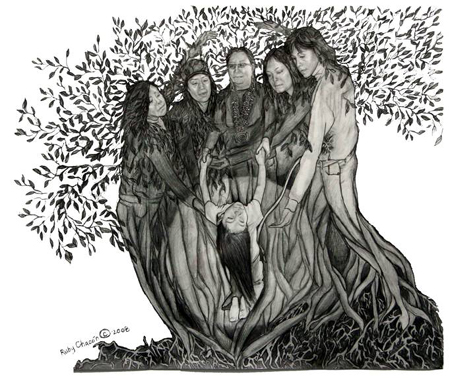 When Ruby Chacon loaded four kids into her Ford Explorer, hitched up the trailer, and hit the road out of Sacramento earlier this week, she probably thought the toughest challenge ahead was finishing her painting and hanging the MICA y MALCS show that would open Friday in the gallery at Mestizo. That was before a tire blew and the Ford did what Explorers are notorious for doing: rolled over four times, destroying the vehicle, the trailer, and its contents. Fortunately, Chacon and her passengers, who emerged with cuts, bruises, and raspberries, apparently suffered no major injuries. As Terry Hurst, Chacon’s husband and partner in the gallery and coffee shop, explained with more than a hint of awe in his voice, “An hour after she got back, before she even stopped shaking, Ruby was back in the studio, brush in hand, working on her painting.”

The focus of Chacon’s efforts is a collaborative project bringing together MICA, the Mestizo Institute of Culture and Arts, and MALCS: Mujeres Activas en Letras y Cambio Social, or Women Active in Letters and Social Change. MICA is a non-profit dedicated to using art to build stronger communities among physically and culturally marginalized peoples. “As a result of our own experiences in accessing public art spaces,” says their mission statement, “we are an inclusive organization and wish to provide space to all, especially those who in the past have been excluded from other public forums.”

MALCS is an interdisciplinary group of Chicana, Latina, and Native American women scholars who work together to support their common issues through education and promoting public awareness. Examples of their efforts to bridge the gap between intellectual or creative work and community activities include a conference being hosted right now at U of U and this exhibition at Mestizo. Opening Friday, July 18, during Gallery Stroll, MICA y MALCS will feature a mix of new, emerging, and established artists who consciously work to represent their experiences in community, academic, and work environments and to raise awareness of women’s issues through art. Despite their academic credentials, those expecting to be lectured by didactic art will be disappointed. Instead, expect lively images of women brimming with self-esteem. Art may still be a lonely profession, but when these many women get together to celebrate the result, the air is full of fragrance and song.