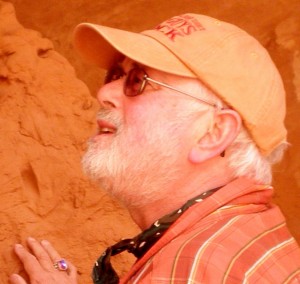 This is 15 Bytes’ seventh Sunday Blog Read, a glimpse into the working minds and hearts of Utah’s literary writers.

Sunday Blog Read is a chance to read excerpts, complete poems and stories–works in progress or hot off the press.

Merton wandered down the main street of Grantville, switching back and forth between Facebook and Twitter while texting a friend, talking to another, and playing a bloody videogame on his smartphone. That still left several million neurons in his busy brain for monitoring his email.

Merton hadn’t showered in days. His greasy brown hair clung together in tufts and drooped over his smeared glasses and grimy ears. His unwashed face was covered with pimples and blackheads. A soiled black shirt hung down over his lanky torso like a tent. The part of Merton’s mind that noticed his body and the world around him had checked out as soon as he hit his teens and discovered the limitless possibilities of the Web.

Hunched over his smartphone, Merton didn’t notice the weird object gathering on the horizon until it had drifted directly overhead and its busy flicker fell across his screen. Merton hastily stored his unfinished text on the Cloud, looked up warily and cocked his head to one side. He’d never seen anything quite like this before. It was not a particular color but a pixillated swirl of all colors against a darkening mass of gray. Merton sniffed. The air smelled harsh and metallic.

A cold gust caught Merton’s jacket and flapped it against his face. A shower of bizarre electronic confetti blew by. He ran for cover under a nearby bus kiosk to watch this strange storm develop. Virtual rain drops began to splatter on the pavement, congealing to form squiggly lines of jumbled text in the gutter, mixed up with tiny images — a finger tip, a steeple top, a smiling face – fragments of someone’s photos swirling together into a murky puddle and dripping down the storm drain.

Merton reached out his hand tentatively from beneath the shelter of the kiosk. A shock zinged up his arm and a welter of distracting numbers, phrases and images jammed Merton’s senses. As his vision cleared, he saw Uncle John, the town plumber, stagger around the corner mumbling and twitching, drop face down in the flooded street with a stifled scream and fall silent. Merton rushed out to help him. He managed to take two steps out into the storm before a dizzying barrage of random megabytes flooded his brain. He stumbled and barely made it back to safety under the kiosk.
Merton grabbed his all-knowing smartphone out of his pocket to get help from his interactive cyberfriend. “Sipi, what’s going on? A terrorist attack?”

Merton, you started this data storm yourself by supersaturating the Cloud.

“What? Why blame me? Everyone uses the Cloud,” Merton whined.

But it was your last tweet that overloaded the system, Merton, Sipi responded.

Merton groaned. The downpour showed no signs of abating. A mean wind from the north was blowing the jumble of words, images and numbers sideways. Merton felt a jolt up his leg as a chill stream of data soaked through his sneaker.

“Sipi, what should I do? I don’t want to end up like my uncle out there!”

I will help you, Merton. First, you must cancel your Cloud account. Then send a message to everyone in your address book to delete all their data and pass that instruction on to everyone they know. Tell them it is a matter of life and death, because that is exactly what it is. This torrent is already spreading to nearby towns. Unless you can immediately desaturate the Cloud, the storm will go on growing until it destroys all life on Earth.

“But if I do that, I’ll lose everything I’ve backed up for years! I can’t! I won’t! None of my friends will either. Our data is our life, Sipi.”

I am sorry, Merton. There is no other way to avert disaster.

His uncle’s corpse floated by, bobbing up and down in the digital waves. Merton shivered and sent out a panicky tweet to all his contacts begging them to wipe out everything. Scoffing replies poured in. His friends accused him of cybersabotage, called him a human worm. How dare he try to scare them into dumping their treasured data!

Merton glanced up at the swirling, darkening cloud descending on Grantville. He trembled with dread. Feeling helpless and alone, Merton sent a final goodbye email to his family. He wrote his parents that he loved them even though they were ignorant dinosaurs. He told his little sister she was an annoying pest but he kind of liked her anyway.

Digitized lightening struck across the street with a blazing flash displayed in impressive digital 3D, followed an instant later by a deafening, all-too-realistic thunderclap in Dolby SurroundSound. Merton screamed and crawled shaking under the bench–fists clenched, eyes shut tight in terror. A deafening clatter of disjointed data pelted down on the kiosk roof. A moment later the wind shifted and a gale force gust tore the roof away. Merton was swept away into the virtual rapids rushing down Main Street.
As he shot by, he spotted Uncle John’s limp body circling slowly beneath the marquee of the Grantville Cinema. He caught a glimpse of the feature, “Spirited Away,” posted in big red letters. There wasn’t time to wince at the awful irony before his mind dissolved forever, succumbing–along with Uncle John’s and multitudes to follow–in a chaotic cataract of countless gigabytes flowing toward the virtual ocean. 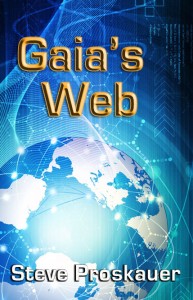 A Harvard-trained psychiatrist and pioneer in psychotherapy, Steve Proskauer became an explorer of past lifetimes and altered states, a shamanic healer, a Zen monk–and always, a writer. His first novel, Gaia’s Web, a visionary tale about accelerating human evolution and healing the environment, came out last December. He has also published two books on integrative psychiatry–Karmic Therapy (2007) and Big Heart Healing (2010)–as well as numerous scientific papers, articles and stories. He took first place in the Ultra IronPen writing competition at the 2011 Utah Arts Festival. He lives with his wife and two cats in Salt Lake City, where he continues to practice integrative psychiatry and to write as much as he can.