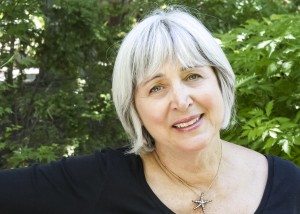 Today, 15 Bytes features Phyllis Barber who provides an excerpt from a narrative nonfiction work forthcoming from Quest Books about Barber’s twenty-year hiatus from Mormonism and her experiences with a variety of religions and spiritual persuasions that converted her to the value and strength of diversity and tolerance.

TO THE MOUNTAIN: ONE MORMON WOMAN’S SEARCH FOR SPIRIT

What of parallel worlds, being in this world but not totally of it? Is there a spirit world side by side with the human world where a metaphorical hand can reach out of the clouds to tap people on the shoulder and remind them of what they can’t see or know? Is there a nest within a nest within a nest—matter, mind, and soul held by the large hands of Spirit? Some say that Spirit is in the wind, in the air we breathe to take in life itself before releasing it to the next inhalation. Could it be the essence that animates our bodies and our material substance?

I’m intrigued by words such as God, Allah, and Creator, though the idea of Spirit feels closer, more intimate, and not so far away. After all I was raised with God, the Father, at the helm, at the bridge, His name invoked daily. Mormonism’s definition makes God an embodied God who is always progressing. But for me, behind this embodied God, I sense an energy field that runs through all and everything. Backlighting, if you will. Spirit infusing the air. A subliminal hum vibrating against the scrim.

I’m fully aware that the word God makes some people nervous and fails to comfort. Many people shout about the right God—their God—with absolute surety and a dead-eye, fist-pumping, even trigger-happy confidence. They say they know who God is and who his children are (and are not), who are the Infidels, who are the Gentiles, the Other. In my opinion, there’s too much shouting about who’s right and who’s wrong, about what’s true and what’s false.

I have no desire to add to this cacophony, but I do know that threads of connection can be found in unexpected places. Many seek The Ineffable, The Force, the I Am Self, The Great Spirit, Divine Power, Higher Power, The Great Architect, or in simpler terms—a connection to Spirit, be it through religion, holy scripture, music, nature, beauty, visual images, prose, poetry, team sports, even “sex, drugs, and rock and roll.”

One Friday afternoon, I found myself in the midst of  men dressed in embroidered prayer caps and loose trousers with cloth strings tied in front. Among women who were strangers wrapped in long, colorful scarves. Me, wrapped in the green scarf that must have been a curtain panel once upon a time, the one I borrowed at the front desk from a woman I met a few minutes before.

In the summer of 2008, I had met the Imam of the Denver Muslim Society in an interminably long line in the parking lot of the Invesco Field stadium—the home of the Denver Broncos (after it was Mile High and before it was Sports Authority)—while thousands waited to hear Barack Obama accept his nomination as a candidate for President. After exchanging a number of words with this elegant man and his equally elegant and refined wife, I said with some caution: “The terrorists associated with Islam have to be fanatics at the fringes of your culture. I wish I knew more about the mainstream of  your religion.”

An inscrutable shadow passed through his eyes, a hint of a bird flying overhead and patching out the sun. “These times have been troubling to all of us,” he said. “If you are genuinely interested, you might come to one of our services,” he added, handing me a card on which he’d written, “Friday, 1:00 p.m.”

I waited longer than I’d intended, maybe hesitant to step into this unknown milieu by myself, but a month later, on this particular Friday afternoon, he was nowhere in sight. When I asked the woman at the front desk, the one who lent me the scarf, she said he was away on a business trip. All of a sudden I felt presumptive, invasive, and like the dreaded sore thumb among these strangers, most of them speaking foreign languages, all of them Muslim.

In their bare feet, a few men kept changing places at the front of the room—talking softly, then loudly, straightening their mats, prostrating themselves, then standing in a cluster for a discussion in a language I didn’t understand. They occupied the back of the narrow storefront and seemed to be deciding what to do next. The women were clustered near the front door—the official back of the room. Someone in another time and place had told me that the men didn’t want to be distracted by a woman bowing in front of them. This made common sense, so I didn’t get upset about being  relegated to the back of the congregation with the women, none of us wearing shoes.

While I waited for the service to begin, a dozen or so women with their young children—a mix of Sudanese, Ethiopian, and Middle Eastern believers—straggled at the last minute into the space beside me, giggling softly, adjusting their scarves, looking at me with curiosity, even amusement. My silver hair or Scandinavian face wasn’t fully covered by the bulky head scarf—the one resembling a curtain panel. I was a stranger here, a foreign body, or possibly a spy or an enemy.

The meeting started abruptly. No speeches. No introductions. Before I was ready to do such a thing, however, I was following the lead of the women: bending down onto my knees, trying to sit back on my thighs. Because I’d had two knee surgeries, I bluffed and sat back halfway before we lunged into a bow in which I could stay long enough to show my respect for this mode of worship. When we stood again, we repeated words spoken by the man conducting the service. Then we repeated all of this again, and then again.

The thing I remember most was the light-green-colored scarf—its smell especially. No hint of perfume or hair spray. But one sniff of the polyester reminded me of something crumpled in a cardboard box and left in a corner. I’d draped it over my head and crossed it over my shoulders, but its synthetic nature didn’t allow my body heat, increasing in intensity every second, to escape. Uncontrollably perspiring in that cramped space among the crowd of women and children, I bent to the linoleum floor again in the middle of downtown Denver, stretched into yet another bow, stood, only to repeat the process yet another time.

The ritual seemed closer to a demanding fitness regimen and was definitely foreign to my mode of worship. But, as if I were learning a dance, I settled into the rhythm and followed the choreography. We moved in concert in this temporary mosque, otherwise a barren commercial space in a tired strip mall. As we repeated the ritual, I became a singular thread in the warp and weft of this new-to-me yet old fabric. There was a yearning in this room. A longing for the infinite, not unlike my own. I felt delicately connected to these women gathering to praise God, even if they were strangers in a strange land themselves, even if I was raining sweat onto the linoleum floor, trying to keep up with them, up and down, on our knees, on our feet.

When we’d finished the prayers and I lifted the see-through green scarf off my head and shoulders and felt the breeze from the pedestal fan on my arms and face, I turned to catch a glimpse of a broad smile full of abundant, uneven teeth. A young African woman tipped her head to one side, welcome written on her face. She didn’t know why I’d visited the Muslim Society on a Friday afternoon. But she smiled as if we’d met on a playground a long time ago—two young girls who’d decided to balance the teeter-totter.

In the mirror of her eyes, I saw devotion and playfulness. I saw history, questions, answers, and finally a hint of mischief. She was seeing something in the mirror of my eyes, too, and for a few brief seconds, we were sisters.

This material was reproduced by permission of Quest Books, the imprint of The Theosophical Publishing House (www.questbooks.net) from To The Mountain: One Mormon Woman’ s Search for Spirit by Phyllis Barber. 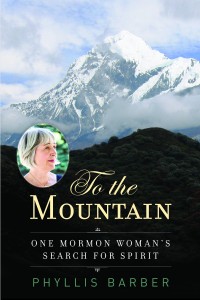 Phyllis Barber is the author of eight books, including a trilogy of memoir:  How I Got Cultured: A Nevada Memoir (a coming-of-age story that won the Associated Writing Program Award for Creative Nonfiction in 1991 and the Association of Mormon Letters Award in Biography in 1993); Raw Edges, a coming-of-age-in-middle-age story; and To the Mountain: One Mormon Woman’s Search for Spirit, due out from Quest Books in 2014.

She is the mother of four sons, a founder of the Writers at Work Conference, and a teacher in the Vermont College of Fine Arts MFA in Writing Program for many years.

Tagged as: Phyllis Barber, To the Mountain: One Mormon Woman's Search for Spirit