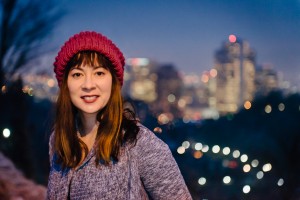 Today we are featuring Salt Lake City-based poet and author Paisley Rekdal, winner of the inaugural 15 Bytes Book Award for poetry in 2013. At the time, reviewer Camille Pack wrote that the winning collection titled Animal Eye was “a stunning and hungry portal into intimacy. We are the animal in Animal Eye,” she continued, “trying to see, attempting to understand, and turning to the physical for comfort.” (You can read the full review here).

Paisley is not only an accomplished author and professor of creative writing, but a tireless ambassador for the role that literature and story play in the life of a community. A maven of social media, she curates both the Mapping Salt Lake City project and Hivemind, a city-wide book club that meets once a month to discuss a book by (and sometimes with) visiting writers of the University of Utah Creative Writing Program’s Guest Writers Series. Utah Humanities’ literature program officer Michael McLane, charged also with community lit programming, says it most succinctly: “Paisley gets it.”

At times she’s taken a turn into mixing her intense lyricism with popular culture. In a Reed College interview she says, “When I was a kid I was obsessed with Mae West . . . I used to dress up like her all the time . . . I had always seen her as a very uncomplicated and obvious feminist hero, but the more you actually learn about her life and the more you learn about the persona she portrayed, the kind of more complicated that portrait of her feminism becomes.” You can watch a killer reading of Paisley’s “Self-Portrait as Mae West Anagram” in the Bite-Size Poetry Series here.

Today we feature a sample from Paisley’s forthcoming collection Imaginary Vessels, (Copper Canyon) due out in November.

white field. And the dog
dashing past me
into the blank,

toward the nothing.
Or:
not running anymore but

this idea of him, still
in his gold
fur, being

what I loved him for
first, so that now
on the blankets pile

a final hour, two,
before the needle
with its cold

pronouncements,
he trembles with what
he once was: breath

and muscle puncturing
the snow, sudden
stetting over the tips

of the meadow’s buried
grasses after–what
was it, a rabbit?

Field mouse? Dashing
past me on my skis,
for the first time

faster, as if
he had been hiding this,
his good uses. What

a shock to watch
what you know unfold
deeper into, or out of

itself. It is like
loving an animal:
hopeless, an extravagance

we were meant for:
startled, continually,
by what we’re willing

to feel. The tips
of the grasses high
in the white. And the flat

light, drops of water
on the gold
coat, the red, the needle

moving in, then out,
and now the sound of an animal
rushing past me in the snow. 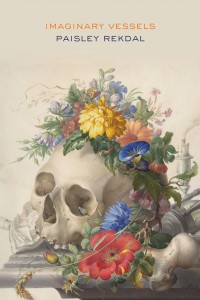 Paisley Rekdal is the author of a book of essays, The Night My Mother Met Bruce Lee;  a hybrid-genre photo-text memoir that combines poetry, fiction, nonfiction and photography entitled Intimate; and four books of poetry: A Crash of Rhinos, Six Girls Without Pants,  The Invention of the Kaleidoscope, and Animal Eye, winner of the UNT Rilke Prize.  Her work has received the Amy Lowell Poetry Traveling Fellowship, a Guggenheim Fellowship, a Village Voice Writers on the Verge Award, an NEA Fellowship, and various state arts council awards. She teaches at the University of Utah and is the creator and editor of the community web history archive project, Mapping Salt Lake City.