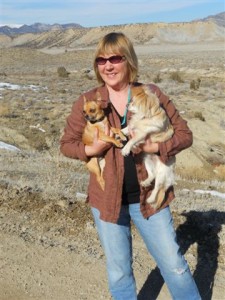 Today, 15 Bytes features poet Nancy Takacs whose latest collection Juniper, a letterpress volume printed in a limited edition of 400 copies, was published in 2010 by Limberlost Press.  Today she provides four poems, the last one yet-to-be-published.

So curl up with your favorite cup of joe and enjoy the work of Nancy Takacs!

Process at the Balance Rock Café

on the painting by David Dornan

Having written nothing again,

I take a walk in the junipers,

And now as I open the door

life-sized, I could have had as a child,

their colors over its wide body

from a crayon box, not from the artist’s

language of crimson or cadmium-something.

On the third drawer, a chamois

partly lit near a forest for mixing

on the wall behind the dresser: leaves like kiwi-

and-sage eyes in a cartoon juniper.

A woman’s neck on the wall to the right

two turtles slipping into the pond of her breast.

The floor confettis in a loose beach

for the artist’s bare feet.

Now I know all I really love is color,

blood in the process, how truth

comes from the shuffle,

by the artist-dresser for his new wearer.

Now I know I need the sudden turquoise ear

inside the lemon yellow house,

I learned the easiest way to work

was to submit. In Catholic school,

the same. So I bought a shark,

a little one for my tank. Cool

and sharp, he didn’t swim near others.

I liked to watch his fin, pretend

in all its yellow-violet flutters

he was happy, and could fend

off even the silver angel. It began

one night, as I ate Special K,

way the tetras nipped at him, tail

first, his pretty fin, and the next night

he was gone, as I turned on the light.

I still want the day to swim

with blue buntings, my fence

to cloud with hawkweed,

the greening field under it to rise

so the gate will not open.

I want a beard to ache near

my shoulder with breath

alone with wedges of lime,

all in, not having to lie

about the garlic, folding up

a spring roll of new gatherings.

I want to ignore the warblers

warning me near the railroad tracks

about their nest inside the switch-lights.

What I want is this one deer

who yells in my field each night

for someone to let her out,

hounding me and my baby bok choy.

What I need is a good pork satay,

plain fried rice, and not to be

interrupted by dreams or secrets

or a walk in the garden.

a nest in April, how waxed wrappers

are shredded into trails of confetti,

and where I can find rose foil

the size of a penny.

I don’t know why my pineapple

curry and fried tofu have an aftertaste

And I need to live inside lime.

I want to hear the unasked questions stir

instead of a Chihuahua on lambskin

or a red quilt from Canada

reviewed as “spicy as Kasmir,

as colorful as cloisonné.” I want

syrup revised with an attar of roses,

vanilla and violet in the same milk,

to feel how the needles

of hemlock dissolve in a pond,

and know under the surface

how long the trail of a rhizome

can be, for one blossom.

The Day I Gave Up Ambition

I felt the way watercolors

slide across the page,

when you’re not looking,

my breath came to me

along our desert ditch bank,

in stems of asparagus

sautéed with lime and chives

and butter, the day gave in

that was so clear

I looked in the mirror

road in the map

each time it opened,

fallen into its creases. 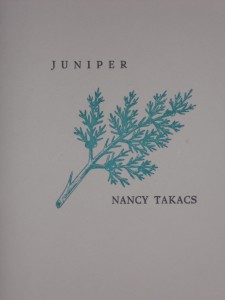 Nancy Takacs lives in Wellington, Utah, and spends summers in Wisconsin on Lake Superior. She is the recipient of a 2014 Ucross writing residency, the 2013 Sherwin W. Howard Poetry Prize for “the best poems” in Weber — the Contemporary West, the Nation Discovery Award, and the Kay Saunders Poet Prize from the Wisconsin Fellowship of Poets. A new book is forthcoming from Blue Begonia Press.