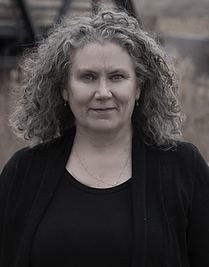 Today, 15 Bytes features West Jordan-based poet Lisa Bickmore who offers here three poems, the first from her collection flicker (Elixir Press) to be released January 1, 2016. The second and third are from a new, unpublished collection.

So curl up with your favorite cup of joe and enjoy the work of Lisa!

Notes toward elegy
—for Larry Levis

That day I imagined him in flames, the day I heard of his death, the cat on my
table batted the dying lilacs, the florets barely clinging to the stem by brittle
threads, falling blue & gray like ash. Falling to the table like a pool of blue ash.
Thinking, yes, this, his fabled excesses, it could be fire, emblem enough,
knowing now that it’s just the words left of him, just the ashes. To let his
language inhabit me for awhile, pass through me like wind through sheer
fabric; grazing me, lifting up the curtain & passing by, repeatedly; tearing
through the house of me in sheets of flame.  Putting on the clothing of his
language, hoping to take on charisma in the praising & the mourning of him.
Not enough, of course:  not enough grief & not enough language to meet the
fact of him smoking outside the building.  Not enough to match the voice of
him saying, Members of the Committee on the Ineffable, or him sitting elbows
on the table, bored but patient listening to some poet translate another
dream. Once I saw him outside a laundromat, holding a woman & kissing her
on his motorcycle.  What are lilacs or a petulant cat to that seedy & therefore
eloquent romance?  A cat who never even knew him, for that matter?  I am
like one of the necessary though mute figures Chekhov imagined for a
Russian novel in a last late fragment:  a parrot; a thrush; a dog so clever he
can practically speak.  & doggedly I insist, I insist I will make an elegy out of
this brief chapter, out of laundry if I must, out of something as ordinary as
dishtowels or socks, lank hair, startling eyes; out of his belly in his shirt, his
slouch; improvising something out of this too much life, now absent even his
poor things.  Moorless, I keep banging up against whatever presents itself, as
on Memorial Day, when we looked for my husband’s grandfather’s grave,
finding myself standing in the cemetery on Prospect Avenue.  The addresses
of the dead.  & then up a little hill, where a doe nosed the wall, & a rabbit ran
across the small apartments where they lay sleeping.  This Arcadia.  He
returns at the last—where?  to the long central valley of California, to
flowering & harvest, cultivation, to mist & miasma.  On what street if any
does he live?  What animals flank his grave, graze at his bed?

from the 2016 collection flicker. Used with permission.

The sound bled from his headphones
thrash metal: he knelt in a pew, late
afternoon sun pouring particolored
and his pallor gleaming: sound blooming
around him, but muffled: I glanced back
at him from a few pews forward; like
Jesus in the paintings of Gethsemane,
his arms open, hands open, looking up: he
was not well, and the music, if you could
call it that, a quiet scream deadened in that
high-ceilinged stone room, a sea, churning

that stops when I halt in the ditch

˚
grass-lined cut between the road north
and the road south, the motor still going

a buzz at the back of the song,
no organ or choir: the boy looked as if
he had not slept, he was sweating,
the music its own cell and him alone in it:

˚
once after mass I found a felled bird
on the plaza north of the church,
halved as if with a sharp, swift knife:
looked up, no one but me there to see

˚
the sky lifts away and I am drawn up to it,
I have not slept, but there’s music for driving
when already broken:

if it could be called song: we looked back and
looked away from his percussion, his making
no noise but the uproar at his ear

˚
in which I say something otherbodily, un-
thought, again and again as if it alone might
bind me to myself hurtling away from impact:
the truck I hit two times made of what seems
to me steel, my fender crushed like a paper cup:
I sing I don’t know what words in the capsule
of my headlong car, boundless, until I stop
in the gully, the car humming, my heart

the priest talks on, as if this noise were the same
as the still air, the falling atoms of afternoon light

˚
careening: sun high at its one o’clock traverse,
the car breathes, I hum, check my instruments
to see if I am well: strangers stand beside their cars
wait  at the other side to pull me from the wreck.

Originally published in the journal Menagerie

After you left,
we crossed the river another dozen times,
twice in taxis, walked to a new museum, bought books,
found the Mermaid Cafe and took the train to Howth
where the stairs up to Church Street smelled

of ancient urine and the abbey kept falling, invisibly,
to ruins under a brilliant sun.  It was late September.
The station with all its hurry had chocolate and crisps
to eat. I bought a magazine.  At the end of this journey,

We had emptied ourselves of nearly every desire:
only the west still glittered, the unsought and unobtained,
and you had gone home to your city of granite
and further, to your village, and we were alone

with the Irish and the remnants of the dawn
when we kissed you goodbye on St. Augustine Street
just blocks from St. Audoen’s and its ceiling
made of clouds, only hours from the last sunlight

that poured like a river down the stone street.
We walked to bronze and bird-stained Joyce,
and the black pool for which the Vikings named the city
was nowhere to be found, but everywhere

was the absence of you:  girl skipping with paper bag
and hair bow; you sitting across from me at tea,
me appeasing disconsolate Evie outside the exhibit
of the ancient book.  We viewed Yeats’s notebooks,

lingered over the faded signatures and you were not there:
the light was chalky, cold at the bone; sirens brayed
up the streets.  Dublin would never miss us, but we,
foreign and exhausted, longed for you at Ha’Penny Bridge:

the enigmatic saint stenciled in spray paint on the door
spoke your names: this would all go on and we would
disappear as the detail of a fresco altarpiece had, leaving
just the outlined torso of someone once said to be holy. 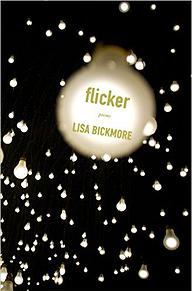 Lisa Bickmore is the author of two books of poems: flicker, which won the 2014 Antivenom Prize from Elixir Press; and Haste (Signature Books, 1994). Her poetry, scholarship, and video work have been widely published in Glass: A Journal of Poetry; Tar River Poetry; Sugar House Review; SouthWord; Caketrain; Hunger Mountain Review; Terrain.org; Bite Size Poems project (Utah Arts Council); Quarterly West; The Moth; MappingSLC.org; Fire in the Pasture: 21st Century Mormon Poets; and elsewhere. In 2015, her poem ‘Eidolon’ was awarded the Ballymaloe International Poetry Award. Currently, she is a Professor of English at Salt Lake Community College, where she teaches writing of all sorts, and is one of the founders of the SLCC Publication Center.