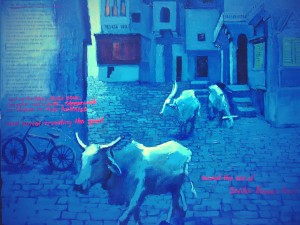 Today we are featuring poet and Weber State University English instructor Laura Stott. 15 Bytes is finally catching up with Laura who last October at the 15 Bytes Book Awards ceremony at Weller Book Works was upstaged by the pending arrival of her first baby . . . who, we are happy to report, has safely arrived. (She has work forthcoming in a poetry anthology on motherhood.) Laura and her sister Katheryn Stott, a painter who primarily works in oils, recently collaborated on a project in Pennsylvania. (See photo to the left.) Some of Katheryn’s work can be seen at Ericson Gallery in Salt Lake City.

Today Laura favors us with, first, two recently published poems published in Copper Nickel and Sugar House Review, respectively, and then selections from her collection  In the Museum of Coming and Going (New Issues Poetry&Prose, 2014), a finalist for last year’s 15 Bytes Book Awards.

So curl up with your favorite cup of Joe, and enjoy Laura Stott!

Spider webs by the backdoor funnel into
a black cave, a silk and nocturnal universe
where a fanged creature waits
for the moon’s threaded children—
a moth, a marbled wasp—
to crawl gently into the tangle
of reflection.

Mother spider wraps her eight legs lovingly
around all her young and whispers,
this is the earth
you are waiting to be born into—
dream of the wings you’ll eat,
and kingdoms between roses.

At the edge of a boat dock
the blue nudes look far down a ladder—
to where it hits surface glass.
They can see rungs barely

waver as their blue heads peer
over. Their own eyes
and the stars reflect in dark tide.
It seems they will be climbing

down into sky, one
blue nude after another.
It couldn’t feel anymore night.
Seals swim in their black
milky way. Sky ripples
with the color glaciers create.

One moon bathed, barnacled
rung at a time, the blue nudes
disappear, past mussels
in their blue shells,
kelp tangled in mid-air.
One nude stops at the rim

before arranging herself
over the side–torso twists,

as hands cling. She looks back.
It is this leaving that’s beginning.

Her hair blows in the wind.

On prime time,
they interview the scientist
who unearthed the great beast
and was up to her waist
in mammoth gore, up to her elbows
in frozen flesh. And you can see
the excitement as she describes bile stones
in liver and they show a picture
of what looks like two large beetles,
two large prehistoric brachiopods.
And for a second, the camera
is on the reporter who looks as though
she is about to throw up.
But now, the scientist is telling us
about the blood that oozed out,
dark liquid, the thrill, the possibility
of complete DNA preserved
so perfectly in this mother,
Buttercup, they named the she-beast.
Didn’t they promise
they would give us a mammoth?
I’ve been watching the headlines,
hillsides, roadside farms
for a glimpse. There is the question,
she says, if we should?
But you can tell she wants to.
How I long to see them
grazing on the islands,
their long wooly hair
blowing in the breeze,
their tusks making way,
filling the streets
our cities and suburbs
with their saunter.
Deep in the bogs of time
if you passed them at sunset,
startled by their stillness,
you would take it as a sign.
In the mist, in Siberia,
I imagine saber tigers and forests
of giant ferns, larger than our houses,
where we are nestled and waiting for clones—
we’ll arise when we can’t sleep,
step into the night of streets
where we can almost
see them staring back, hear
their nervous breath.
And we’ll look up, searching
for stars that may already
be burned out.

The girl with no hands

stole a silver pear
from his majesty’s orchard.
And the gardener saw it, believed
she was an angel.
The way she tilted her head back
and stretched her neck to the sky,
to eat. Her hair hung like silk curtains.
And in the moonlight,
how could he not
fall in love with her?
How could he betray this love
and tell this secret
with the time to count each fruit?
Each destined
for their numbering.
It was a story the gardener couldn’t
explain, but had to account for.
So, the gardener and the King waited
in hiding for the maiden
and when she appeared, hunger
was in the girl’s every step.
They dared not speak,
but watched her, as moths lightly played
around their faces.
Are you of this world?
If I am a dream, then I am a dove.
Be my queen, I will make you hands,
and the gardener wept, and the king
kept what was never his to keep.

Such a quiet shade on the edge
of desert—blue bicycle shop, blue
marching band, blue lining
royalty’s garden, blue omelet shop.
Bright green chilies
and lemons hung in blue doorways.
Cows wander and wait with split hooves
on blue streets.
The old city is painted like it’s not part of this world—
look at the sunset, the puzzle
of square, the blue houses in
horizontal light.
Over Jodhpur the great fort of the maharaja,
citadel of the sun,
stands on desert rock.
In a dream
it shades the clock tower, bangle bracelets,
persistent children in bare feet,
and our breakfast
of saffron lassi and fruit.
Late at night, toward the train station,
the city is emptied
and dark–no loud taxis, no traffic,
no one shouts names of spice.
In the dark, no one sells posters of movie stars.
And in the blue, these cows,
singular and white, sleepwalk
or dream in their holiness
and unrest, traveling the quiet,
toward the end of Sardar Bazaar Road. 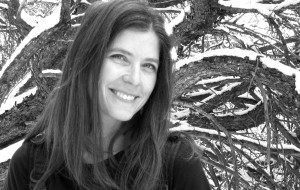