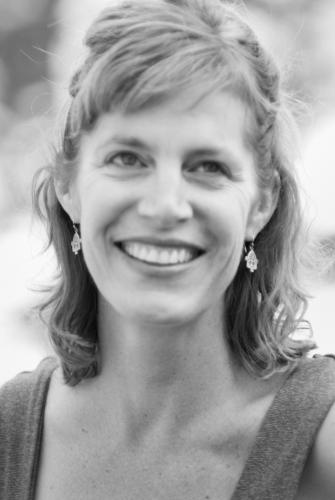 Today, 15 Bytes features Salt Lake City-based novelist Kirstin Scott who offers here a short excerpt from her novel manuscript Ajax at the End of Time, currently being “shopped” by her agent.

“In this little section, the so-far-unnamed and usually third-person narrator of the novel briefly steps into the frame to tell this personal story.

“I expect a reader might wonder: Why the sudden intrusion of the ‘I’ voice, and what’s the point of this anecdote? This section has no obvious connection to the story and characters the narrator has focused on thus far in the novel.

“For me, narration is one of the central and most compelling mysteries of a novel. Who’s talking? I want to know. Even with (especially with!) books that have omniscient and disembodied narrators—books in which the telling is meant to be “transparent” to the action, not at all foregrounded—I tend to fixate on the implied speaker. Who’s behind the curtain; who’s moving the knobs and dials; what’s the motivation? Why do they need to tell me this?

“What I love about stories is that often we don’t understand them or our reasons for having them. We’ve all heard people interrupt themselves to say, ‘I don’t really know why I’m telling you all this….’ And isn’t this often a signal that inside that story (or around it, or under it) is something rich, true, and important?

“I want this section of my novel to serve as that signal for readers.”

I once had a feeling—it was a conviction; I thought it was a premonition—that I was going to win something. An essay contest, A Hero in My Life, five hundred to one thousand words, that my fourth grade teacher obliged us all to enter.

Writing had never been so easy. I had my story in the bag. My uncle, after all, is El Devorador. In my essay I described his mask: sharp white teeth stitched around the mouth hole, the smooth red face and head. I described his bulging arm muscles, the sheen of the skin across his huge round chest (I have a photo). I said how he was never unmasked, how he was undefeated for the whole of his career, how he was a técnico, a good guy—the way he threw opponents to the ground and then somersaulted lightly over them so as not to hurt them really. My hero.

Of course, I left out some information. I didn’t say how brief El Devorador’s career had been, maybe only twenty matches or so, all in the small Chiapas city where he and my mother were born. I didn’t say he’d come to the U.S. and then disappeared and that I never knew him. Most of all I didn’t tell the other story my mother used to tell about him, how as a kid my tío once pretended to be blind. For half a week or so he’d crashed around the house for just the simple reason—after days of her prayers and tears—that he could gift his mother with a miracle at Mass. And that’s what he made happen. One hand gripping the back of the pew, he fluttered his eyes into focus; his gaze rose up to meet his mother’s. With pleas to Santo Niño Jesús Doctor still pouring from her mouth, wrecked with sudden joy and gratitude, she fell into her son’s arms. And if my mother ever disapproved of or resented her brother’s deception in this instance, you wouldn’t know it now.

“It made our mother so happy!” she’d say, tearing up. “Her prayers were heard. The best day in her life. A miracle.”

When as a nine-year-old I wrote down my uncle’s abbreviated legend, I felt certain he was out there, El Devorador. When I would have won the essay contest and come into sudden fame, he’d have read my essay and arrived to find us (so I thought). I’d be a hero to my mother then, continuing the noble line and putting back a missing bit of family.

I feel he’s out there still. He’s maybe even close to us, living here in Salt Lake City, pouring cement or something, lying on the couch. Of course now I know he’s ordinary. He let himself be swallowed up; the silent months and years took him down without a fight. The good guys and the bad guys and the strutting in the ring: it’s all staged, in case you didn’t know, but in this case I doubt he even bothered to pretend.

I’ll be back. I’ll stay in touch. I’ll send you money every month.

He was El Devorador. I had a photo of him.

Kirstin Scott is the author of the novel Motherlunge which won the AWP Prize and the Utah Original Writing Competition.