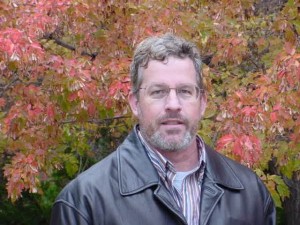 Today, 15 Bytes features Cedar City-based writer Kevin Holdsworth who here provides a poem in the form of an elegy for the late beloved “desert writer of place,” Ellen Meloy, and an essay.

So curl up with your favorite cup of joe and enjoy the work of Kevin Holdsworth!

The first part is easy:

joining in with song and spray,

and confessing nothing but wonder

all that holy water

quicksilvered at dawn and dusk.

But now we only oar

a wave of empty space

that curls the downstream side

wearing down to silence.

Slow and dumb in flatwater

we remember the rapid—

a bronco ride in a washtub—

good wet fun while it lasted

but over with much too soon.

–an earlier version of this poem appears in Mountain Gazette, c. 2006

Christopher, Henry and I start from Big Elk Park for a couple-night backpack in early season. There are less than a dozen cars at the trailhead, day-trippers at that. I’ve been here in high season and seen hundreds of cars. And trucks, yes hundreds. Numerous as the mosquitos.

We walk up through the timber and openings and find a nice handsome camping spot on the side of a muy grande meadow with some ponds on the grassy slope, just a bit short of Shutterbug Knoll.

The next day we walk up to the Knoll and say, “Wow, that is some view of high peaks and valleys,” and snap a few, and then we walk over to Sweet Caroline Lake.

On the way back to camp we take the pack animal’s short cut around the Knoll. The best option, unmarked though it is. We are getting nearly to our camp and Chris says, “Oh my heck, we must be lost. Again. Always lost. Lost!” And I say, “No, no, we aren’t lost, I know exactly where we are.” And really I do; I’ve been paying attention. I’ve kept my eyes fixed on the trail ahead and know we’re close. Looking down the long spruce corridor, I soon notice in the trail ahead a bear at our campsite.

Now, it is a clean campsite. The food, hung at a hundred yards. And the tent, the other direction, half again as far. And the backpacks are stowed way up in the trees. And the campfire ring, well, it doesn’t have fish guts strewn all over it. So, as I reflect thus, I notice there is this bear.

And it’s a good-sized bear, I cannot lie. Surely about 297 to 322 pounds. A black bear, and every inch of it I behold in silhouette, before it sees me. I don’t want Christopher to see it, much less Henry, so I whisper, “There’s a bear.” I grab Henry and put him on a lead and then we quietly back up about fifty yards to a clearing where we have a good, defensive position in case Blackie wants to tangle. We check the bear spray, and I bravely wield my ice axe.

From the clearing, we’d be able to see even a demonic grizzly, jaws dripping blood, come roaring outta the timber, eager to tear our heads clean off . . . or surely its more predictable cousin. I begin to say, “Let’s make some noise, boys.” And we make some noise.

In addition to shouting, we toss many rocks and also limbs toward the bear’s location. We shout, bellow and hiss.

After a few minutes, we go down to our camp and assess the extent of the damage. The bear had just scampered up a tree and knocked Chris’ backpack off a limb. That’s it. And I’m thinking, well that’s not much. Good thing we showed up or Blackie would’ve found some antiseptic cream or toothpaste to enjoy.

Christopher suddenly mentions that we should pack up and leave. Noting it’s a quarter after one in the afternoon MST, and that our visitor had checked in as Ursus americanus, I’m not able to argue. I know that bear will come back. This is something Chris also senses, at age fourteen; hence his strong desire to go somewhere else.

Chris guards, watches Henry, who is chained to a log, and beats a stick against the log in time. Meanwhile I pack up camp. This takes about forty minutes. I get it all stuffed, and then we shout a few more things, and then we leave.

We walk out to the trailhead. We pass three people. I want to consider camping in a willowy alpine-splendor-ed meadow, or in the craggy canyon, or maybe at Freedom Lake, but Christopher strongly enunciates his choice rather for a motel in Pinedale.

I don’t think it’s a problem bear. A human camp is going to smell intriguing in any case. A beast that surveys its domain to satisfy omnivorous notions. Seeing what turns up.

It will come back, the bear, maybe in the mood to give us a nightcap to remember. I don’t really want a return visit, not with my son and my dog. No, not just before dark, in the murky shadows, as night is softly falling . . . Yogi making the rounds. No, that would not be good.

Bears are hungry; they’ll eat anything. There’s only a few people in the mountains right now. No sheep or cows. The trade-route trail teems not with the world-class echelon on the way to Dinwoody. Later in the year, the bear will not be here, nor will we be, but what of our fear? Less permanent than scratching marks on aspen. 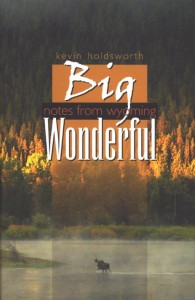 Kevin Holdsworth is the author of Big Wonderful: Notes from Wyoming (2006) and Good Water (forthcoming 2015) both from Univ. Press of Colorado.  He received the Wyoming Arts Council fellowship in creative writing in 2009.  He lives with Jennifer and Chris in south-central and southern Utah and teaches at Snow College Richfield.