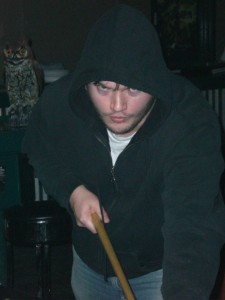 Today, 15 Bytes features Salt Lake City-based Jerry Vanleperen, an editor at the poetry journal Sugarhouse Review which is approaching its fifth anniversary. Here he provides three as yet unpublished poems from his Old Marine series, featuring a curmudgeonly social outlier you’re not likely soon to forget.

So curl up with your favorite cup of joe and enjoy the work of Jerry!

Tuesday is garbage
day, always has been since
the mayor started
Recycle Mondays. Says
it’s a green, serene
start of the week.

The wife was going
to get her hair colored
along with nails on her feet
or maybe it was her
hands. Tells me do this
and that. Gotta be done
before she’s back,
so I don’t catch
no hell.

I put on her slippers
the ones she walks
around the garden in,
because they’re closest
to the door.

I check the mail and
of course, it hasn’t come.
An hour late for each
cent those bloodsuckers
raise on postage. Doesn’t
matter, the women’s underwear
store hasn’t sent a catalog in months.

I start to pull the trash
can towards the garage
when a maniac woman
comes down screaming on
the sidewalk.

I can’t tell what
in God’s Christ plate
she’s hollering about.
I consider slapping her.

Got the feeling
from how wild she is
she’s got a grandkid stuck
in the garage door.

I know what that’s about.
Seen a lot of toes
go missing, lots of cripples
because of that red emergency
lever that hangs
like a sweet candy for kids.

We’re half way through
the neighborhood and the lady
starts making more sense.
Says her husband is drunk,
bipolar and needs to
get to the VA before it’s
too late.

If he’s an Air Force man
might be easy, might not have
to bloody up my wife’s slippers.

God help us and especially him
if he’s a drunken sailor, woken up
on the wrong side of the afternoon.

We get inside the house and the lady
goes to the back bedroom
I inspect the layout. Same as mine
But I won’t trade, don’t like the look
of their recliners. Is there a bigger
needle in the crotch than
people who own a grandfather clock?
Probably, but boy, I can’t think of it.

She calls me to come back
and for one moment I remember
her saying bipolar. I think of my wife.
I think of a drunk grunt
who might keep
as many guns around
as I do.

I go into the bedroom, back braced
against the hall wall in case he shoots
and I have to kick ass.

But he’s really a sad sack of bones
sitting on the bed, shaking my hand
asking if he can just sleep.

His wife calls him a fool,
says there ain’t no insurance
and they need to get to the VA

She pushes him off the bed,
yells for me to grab his feet.
He just wants to sleep
And she keeps calling him a fool.

We drag him down the hall,
probably getting carpet burns
along his torso like sliced pig.
Poor bastard.

At the front door he gets
to his feet. We get him on the porch,
he grabs the railing
like it’s his last possession
on Earth after a tornado.

His wife begins punching him
It’s Smokin’ Joe Frazier with
old wrinkly knockers.
He loses his grip and she calls him
fool and lands a right cross
just to be clear, she’s a real
ball buster.

Then we get him in the passenger seat
of their golden Taurus.
She says she’s got to go lock up
the house, hands me a roll
of duct tape to secure him
in the car. My wife is due back
at anytime, so I wrap this poor
bastard up in the silver tape.

I say good luck and good riddance
and head home to take in the trash.

I heard news stories about mothers
who don’t want no more kids
and drive a van full of em into lakes.
I wonder if they’re really going
to the VA, how long fingerprints
stay on wet duct tape.

This was all years ago. Now recycle day
is on Tuesday, same as garbage day.
My wife says the man
down the street just died,
diabetes. Says he was a serviceman,
asks if I knew him.
I say no.

Old Marine on Movies, Marriage and the Flaming Jalapeno

The VA has me on new medicine,
gives me the cotton mouth
dries my lips up like a Nevada whore.

You should sue!
I couldn’t find anywhere to park
since that damn Flaming Jalapeno
opened up.

Might be different
if I could stomach Mexican.
But I get the burrito splatter
something awful.
How is this movie?

But that dope doesn’t say anything
just oogles my Corps tattoo.
So I raise the video higher

This one here
Virgins of Sherwood Forest.
Is it pretty good?

My wife would wonder
what a man my age
thinks bringing home
Sherwood virgins. But boy,
it looks interesting.

I don’t have time for this dumb mute,
my wife’s waiting in my car outside
but something about him
reminds me of Vernal, back when
I lived out East
with roughneck oilers, real tough guys.

One night we all watched Pretty Woman,
and it was a good show.
I tell you, I’d let Julie Roberts give me the clap.

If I thought this kid had any clue
how to work the register I’d rent Pretty
Woman, but I walk right out
in case my wife tries to turn
Nora’s radio.

My wife tries to get my attention
wants to know why I didn’t rent a thing
but I just stare at every son of a bitch
coming out of the Flaming Jalapeno.

is on Tuesday, same as garbage day.
My wife says the man
down the street just died,
diabetes. Says he was a serviceman,
asks if I knew him.
I say no.

I haven’t seen the assholes
hollering on the Price is Right
in a week.
Been to funerals
and burials each morning.

I can stand to look
at the bodies in the caskets,
but boy I hate to.
I knew those pricks.

Most of the time
at the cemetery they got
the color guard,
even let the Coast Guard
vets get involved.

None of em can fold
the flag as tight as it should be.
Bunch of fat-asses,
with their bifocals and bellies.

If it weren’t for my wife
I’d be out there
rifle in glove.

I get home and push
the obituary pages
off the recliner.
The wife puts on a movie,
but I can’t seem to give
a good goddamn.

Jerry VanIeperen is a man with one wife, two kids, and one dog in Salt Lake City, UT. He earned an MFA from the University of Nebraska and in 2009 became a founding editor of Sugar House Review. His poems have appeared in Redactions, burntdistrict, Plainsongs, Black Rock & Sage, The Northville Review and elsewhere. He is a terrible bowler but not bad at Trivial Pursuit. You can listen to audio recordings of poems from Sugarhouse Review [here.]