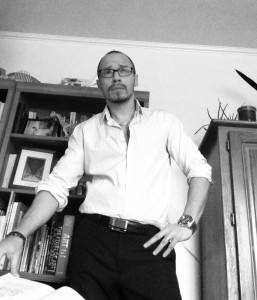 Today, 15 Bytes features David Hawkins who provides three selections from his award-winning manuscript  the book of the missing. “dark adaptations” is one of two long poems in the collection and the featured sections below were originally published in the Seattle Review. The other long poem in the collection was written after Leonardo’s famous anatomy “The Foetus in Utero,” the focus of Hawkins’ reading this past Wednesday at City Arts at the Salt Lake City Library downtown. The two long poems are meant to work together, he explains.  The “adaptations” are, in part, variations on themes raised in the Leonardo poem.

So curl up with your favorite cup of joe and enjoy the work of David Hawkins!

ONCE    plucked from sleep   lids fringed in the black

floss of dreams    you woke half in the placid

dark of this world   & half the other

Into endless night     no stars   no moon

only the faint rhythmic snuffling of your

love in bed beside you  told you this

was your own room    And the eye that called up

visions    even in emptiness where you

couldn’t see    beheld in the pitch

mouths smutched with blackcake & ash  as if words

burned on the cold altars of their tongues

All night you watched this grave procession

& when one finally spoke    one wretched

but would say no more   then lurched off

its tunic  Was that it  you wondered

was that all that lie in store    & when you

woke in your bed from the half-dream    there was

this strange animal-smell in the sheets

Well what could you do   The ancient night grows

& draws out each twilight as air turns cold

the renewal of our sooner passing

So without even a weak light for warmth

in this small dark corner    you chose to

burble the black curses of the old wound

to the deep & slumbrous cosmos

THROUGH smoke clotted air   in a leaf-matted

of twigs for the fire   whispers to beasts    fur

glistening with grease water    He explains

all the town’s exactly as he left it

the enfeebled light of the foundry

& above all    the disinterested star-

The animals nod   bray softly at

the moon  the little light it gives    so crude

only their single note   now roughly

doffing its small coat   can match it

Come back  we beg      starlights are only

little wishes for presence    & the egg

alone in its nest sends up a wistful

persistent call    Then we add    Listen

you can hear the crow that lives in the walls

RECKLESSLY you chased the dream into light

Now the lawn must be mown    flowers tended

& you’ve found so many entanglements

nothing can be gathered in any lone

vessel   Is it any wonder you can’t

remember how simple it once was    when

trailed into dark    When occult notaries

in every secret port refused

to disembark    they wrote by the rocking

rushlight of their black naval desks

The notebooks they’ve left behind describe

the gray slabs of its streets & boroughs pried

reduced to scrap    burned in the black square

where day or night  the sculptor’s hammer

rung feverishly against the stone

If only you could get it back    but here

& night teems with twists of stars

& we have still so much to do before

its black haul swells up & overtakes us

© 2014, David Hawkins. As originally appeared in The Seattle Review. Reprinted with permission of the author.

David Hawkins is the author of the non-fiction chapbook, Lorraine Nelson: A Biography in Post-it® Notes, winner of the Cupboard’s Literary Pamphlet competition, selected by Michael Martone (2011) and the poetry collection, the book of the missing, winner of a Utah Arts Council award for poetry and a finalist for the Poetry Foundation’s Emily Dickinson prize. His poetry has appeared in a number of journals and periodicals, including At Length Magazine, Barrow Street, Bat City Review, Chelsea, DIAGRAM, The Pedestal, SPORK, and The Seattle Review, among others. An Assistant Professor/Lecturer at the University of Utah where he was the Editor-in-Chief of Quarterly West  from ‘01-’05, David lives in Salt Lake City with his wife and their two boys.