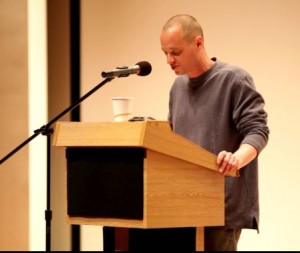 Today poet and University of Utah professor Craig Dworkin favors us with an excerpt of his long poem “The Falls” from his most recent collection Alkali (Counterpath Press, 2015). I heard Craig read once at City Art–a blend of the technical and lyrical that was hypnotizing. Later I heard him present in Joel Long’s writing / literature class at Rowland Hall-St. Mark’s where he held forth on some of his more daring inter-textual forays into the material nature of language, including real research into chemical engineering for a series of poems— all titled FACT—which describe the chemical makeup of their own various physical properties, from ink on paper to compact discs to 16mm film.

So curl up with your favorite cup of Joe, and enjoy Craig Dworkin!

[ . . . .]
We are always falling, but sometimes we forget. And because there is motion, there
must be emptiness, yielding and accident. Atoms plummet through an infinite
void — they rain straight down, perfectly vertical, with only occasional
swerves.

As when, on some september night, in the air, you can feel the end of something and
the beginning of something else: a peripeteia; a recognized crisis; a clinamen
— points in the drama with a sudden reversal.

A trama serves to plot the path to which the warp is at any moment wefted, along
the lines of termination of the web, formed by the last weft-thread driven
up by the lay.

Just as each beautiful day is also a meteor (se estrella las estrellas).

Until the moment of collision, some portion of unforeseen motion partitions the
distance remaining.

The tea leaves, the cake crumbs — the sound of a bell,
the smell of fallen leaves — the chips as they may.

With blue cærulea stewed as a potion, catananche (asteraceæ) blooms in the brew.
Infusions are taken as slopes speeding sleep. The sugars dissolve; the dyes
diffuse; the thyme embitters as it steeps.

Cupidone blooms from mid-june to late august — the tender perennial grown as an
annual, seed-sown in soil that drains.

Then the sepaline drop, the wither.

Everything rinsed out, bleached pallid and spoiled.

The achenes, the scarious bracts. The cast and the
blanched.

The nights; the made weathers; the winters.

The precarious, impending and staggered.

From the scabs to the scars to the aches.

The slid and the lanched.

The wrench of the branched clastic carpals in catch.

The scales and bracts frame bundles of stamina bound by their filaments.

The fathomed petals scroll as they dry.

The back and the back on; the rink of the belt.

The sifting of fells. The tymp-arch for tapping of iron
and slag. The gothic drop of the fauld.

The vitrified refuse and calcinate cinders; the furnace
soot.

The foot; the particular tread; every ambulatory
moment; the other shoe.

Each particulate in every suspension.

The spillway, the mud spew, the quicksand. The draws.
The fill from the point of extraction — the drays in
translation all the way to the very point of deposit.

The mudflow; the glue pour; the asphalt rundown; the
endless displacements; the concrete overflow.

The outwash; the melt and the runoff; the watershed.

And then — as one’s downward gaze pitches from side
to side, picking out random depositions of salt crystals
on the inner and outer edges — a vertiginous keel.

The sudden declivities, the vague inclinations, an
inaccessible precipice; precipitates.

At the edges of the walk the slate of the paves of the path are halved. Notched, cut
away at a bevel, the slabs, chipped and fit, nestle into each other with a
mutual overlap.

The total pitch and batter of the bank. The flag and the
drop of diminutive bends, from the sinister chief to the
dexter base.

The sinter and leached reach of scoriated recrements,
sedimented lees.

The beleaguering leak from fothering failing.

The further back; the so far behind.

The forging, forgetting — the spans of the gaps of what
slips from the mind.

The indiscriminate scarp of the hills; the crest of the
slopes; the cast up and cupped inner sides that envelop
a ditch.

The hollow of a vessel, bowl, or drinking vessel.

The hollow of the waves, the breast, the depths. 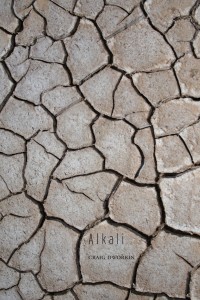 Craig Dworkin is the author of several books of poetry, including Dure (Cuneiform, 2004), Strand (Roof, 2005), Parse (Atelos, 2008), The Perverse Library (Information As Material, 2010), Motes (Roof, 2011), Chapter XXIV (Red Butte Press, 2013), An Attempt at Exhausting a Place in Williamstown (Publication Studio, 2015), and Alkali (Counterpath, 2015). He has also published two scholarly monographs, Reading the Illegible (Northwestern UP, 2003) and No Medium (MIT, 2013), and edited a half-dozen collections: Architectures of Poetry, with María Eugenia Díaz Sánchez (Rodopi, 2004); Language to Cover a Page: The Early Writing of Vito Acconci (MIT, 2006); The Consequence of Innovation: 21st-Century Poetics (Roof, 2008); The Sound of Poetry/ The Poetry of Sound, with Marjorie Perloff (Chicago, 2009); Against Expression: An Anthology of Conceptual Writing, with Kenneth Goldsmith (Northwestern, 2011); and Nothing: A User’s Manual (Information as Material, 2015). He teaches literature and theory at the University of Utah and serves as Founding Senior Editor to Eclipse <eclipsearchive.org>, an online archive of radical small-press writing from the last quarter century.