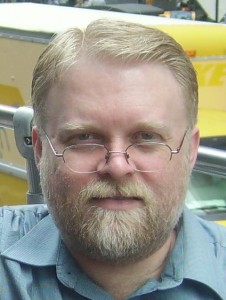 This is 15 Bytes’ fifth READ LOCAL First, a glimpse into the working minds and hearts of Utah’s literary writers.

Sunday Blog Read is a chance to read excerpts from works hot off the press, or in the case of this month, a work-in-progress.

Bigelow on the genesis of Mormon Punk:

“What prompted me to write this memoir was the desire to revisit my life’s most pivotal time. The book focuses on the time period from when I left the Mormonism to when I chose to re-embrace it. After two years of rebellion, I faced a major crossroads when I had to decide which path to follow for my life. While my main motivation is to share my spiritual journey, I also feel a secondary desire to simply portray Salt Lake’s underground punk/new wave scene of the mid-1980s.”

A memoir by Christopher Kimball Bigelow

“I don’t want the priesthood,” I said to my dad.

His hand stopped, holding an onion ring in midair. A complicated look passed over his face—surprise, disappointment, perhaps fear.

“For real?” he asked, squinting at me.

I shrugged. Was this really a surprise to him? I still looked pretty normal—I hadn’t yet spiked my hair, pierced my ear, or started wearing ripped-up, tie-dyed, psychedelic-punk clothes. But I’d assumed he would see a different look in my eye, smell the cigarette smoke on me, sense a disturbance in the Force.

“Why not?” he asked, his voice almost a whisper.

Just a few weeks earlier, in May 1984, I’d graduated with honors in our mountainside Mormon suburb of Bountiful, just north of Salt Lake City. Although I wasn’t quite eighteen yet, I was now sharing a studio apartment in Salt Lake between two frat houses, right across the street from the University of Utah, where I was registered to attend that fall. Ordination to the Melchizedek Priesthood—the full adult priesthood—was the next step in my Mormon progression.

His bacon burger forgotten, my dad rubbed his forehead. “This is going to floor your mother—I mean, knock her right over.”

“And your brothers and sisters.”

I was the oldest of nine kids, with a tenth still to come. Growing up, I could never go a week without hearing how important my example was. I knew my dad must be panicking now, with his guinea pig going wrong like this.

“The kids don’t have to know,” I said. But I knew it was already too late for my next-oldest sibling, Drew. Somehow he’d heard about a party at my place, probably through Dean, my corrupter-of-youth friend who was still attending Bountiful High School. Lisa had made jungle juice with Everclear, letting it mellow overnight in a hollowed-out watermelon so it went down smooth. My memory of the evening was hazy, but I suspected I’d made an ass of myself to one of the girls in Drew’s group.

My dad took a long, slow sip of his Coke, his eyes focusing on nothing. “I gotta admit, I didn’t see this coming,” he finally said. He let out a perplexed chuckle. “I thought you were on the right track.”

It was true that I’d been—outwardly, at least—a compliant Mormon boy all through junior high and high school. Each week, I’d attended over four hours of religious meetings. I’d earned my Eagle Scout award, which was somehow part of the Mormon gospel. I’d helped push a handcart through the mountains on a pioneer reenactment trek. I’d accompanied my family on a pilgrimage to Joseph Smith’s city of Nauvoo, Illinois, which my grandfather on the Kimball side was restoring for the church. At age sixteen, I’d become a priest in the Aaronic Priesthood—the junior, preparatory priesthood—and baptized my eight-year-old brother. An elderly patriarch had laid his hands on my head, declared my lineage in Israel’s tribe of Ephraim, and prophesied that I would serve a proselytizing mission in a foreign land, which had piqued my curiosity somewhat.

What my parents and church leaders didn’t understand, though, was that I’d simply been going through the motions and biding my time. On one level, I liked some of Mormonism’s stories—the warriors, antichrists, and robbers in the Book of Mormon; the premortal war in heaven, and the coming calamities of the last days; the accounts of Joseph Smith and my two great-great-great-grandfathers who’d hung out with him, Heber C. Kimball and Nahum Bigelow. But otherwise, Mormonism was pretty much all white noise and busywork.

By the time I became a teen, my real prophets were Gary Gygax and Geddy Lee, the high priests, respectively, of the fantasy role-playing game Dungeons & Dragons and its perfectly suited musical accompaniment, the otherworldly rock band Rush. In between our marathon D&D sessions, whenever the opportunity arose and we thought we could get away with it, my Mormon friends and I looked at dirty magazines, dabbled in vandalism and shoplifting, sampled people’s castoff beer cans and cigarette butts, went streaking, and, on a handful of occasions—especially when driven to a frenzy by pornography—conducted sexual experiments on each other, no girls being accessible to us for that purpose.

In my annual one-on-one worthiness interviews with our bishop, I never came close to confessing these sins, even when the bishop asked pointed questions. I found it natural and easy to simply deny everything. Once, when another boy—not one of my buddies—started crying outside the bishop’s office as we awaited our turns, I felt genuinely puzzled. Did he actually take this church stuff seriously?

As my dad locked eyes with me across the table, his jaw muscles pulsed in a familiar, unnerving way. But when he spoke, his voice was calm. “So, what you’re really indicating is that you don’t want to serve your mission.”

“I guess you could say that.”

Due to the Vietnam War, my dad hadn’t served a mission, and World War II had prevented my grandfather from going. They were both expecting me, as the oldest child and grandchild, to fulfill my duty. But I couldn’t imagine anything worse than living like a monk and bugging people about religion for two years.

When our meal was finished, my dad put his hand on my shoulder. “I don’t know what you’re involved in, and I don’t particularly want to know. But if I ever become aware of any law breaking, I’ll have to take steps. Especially if any minors are involved.”

His eyes softened, and a hitch entered his voice. “But whatever you do, please don’t stop coming over to the house.”

Christopher Bigelow works as a freelance writer, editor, and instructor, in addition to running a small Mormon press called Zarahemla Books. He is the author, coauthor, or editor of seven books on Mormonism, and he co-founded and edited the Mormon literary magazine Irreantum and the satirical Mormon newspaper The Sugar Beet. A graduate of Emerson College and Brigham Young University, he began his career as an editor at the LDS Church’s Ensign magazine. He has received an editing award and an honorary lifetime membership from the Association for Mormon Letters.