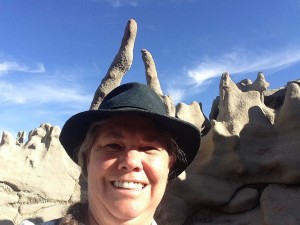 SUNDAY BLOG READ is your glimpse into the working minds and hearts of Utah’s literary writers. Each month, 15 Bytes offers works-in-progress and / or recently published work by some of the state’s most celebrated and promising writers of fiction, poetry, literary non-fiction and memoir. Today we are featuring Salt Lake City-based poet Amy Brunvand who here provides four poems, two published, and two works-in-progress,

“[K]nowing too much about climate change, endangered species and the obscure workings of the Utah Legislature,” she says, “can be disheartening. A few years back all that clutter in my head started flowing back out as poetry, often in the form of rhyming Shakespearean sonnets.” Amy is currently working on what she calls an “ecopoetic artistic vision” which she describes in her essay, “Green Jell-O for the Genius Loci: or How to Save the Earth with Poetry,” published last year in Western Weird, Manifest West #4, and, last month, reprinted in Catalyst magazine where she has been writing a monthly column since 2001 . Lately Canyon Country Zephyr has been printing her poems, she continues, “due to Edward Abbey’s suggestion that the environmental movement needs more poets, fewer lawyers.” She is compiling these poems into a collection with the working title, Utah Reclamation Project which she “stole” from Robert Smithson. “At this point,” she says, “the book is purely aspirational, but here [below] are some poems about Utah state symbols that would be in it if it did exist.”

So . . . curl up with your favorite cup of Joe, and enjoy the work of Amy Brunvand!

Deseret, which, by interpretation,
Is a honeybee is the only
Word I ever learned in reformed Egyptian;
Utah is the land of milk and honey
According to the Book of Mormon. That’s why
We call ourselves the Beehive State. Our hives
Are full of matriarchal insects sweetly
Pollinating flowers, not sister wives,
And by our motto, “Industry,” we mean
We are like busy bees, and not that we
Stand in support of uncontrolled pollution
Released from factory farms or industry
Of that sort, never mind what the Deseret News
Reports about Utah and our conservative views.

Expedition Diary
We set up camp for the evening
At the angle formed by the junction
Of Descent of Man and alpine tundra:
To the north, hollow-eyed skulls
Contemplating death (inhale, exhale);
To the south, the glassy gaze of ptarmigan,
Snowshoe hare and yellow-bellied marmot,
Upholstered and reassuringly benign
Under cerulean sugar-eggshell skies,
But although we had now entered
The fabled Land of Great Apes
We saw no person but ourselves.

At dusk the lights winked out.
We shined our flashlights on and hiked
Back down to the Late Jurassic,
By Allosaurus fragilils, her comb of teeth
Grinning hungrily like the joke’s on us,
As she taught her kittenish hatchlings
How to catch a skeletal sauropod.

Then giving thanks and praise
For air conditioning, indoor plumbing,
Drive-thru coffee, synthetic fibers,
We nestled into sleeping bags.
The green glow of northern exit lights
Danced curtains in the high-vaulted past.

At dawn the stage lights came up,
A tableau of animals posed like mimes.
Cue the soundtrack; A rosy finch,
Songbird of extreme environments,
Warbled; an indignant pika chirped,
Their refrain looping, calling,
From the tumbled stop-motion rockfall.

How we longed to get out of that dark hall
And wander about among the scree,
Sky pilot, columbine and forget-me-nots!
To feel damp foreboding thunderstorms,
Sparks prickling in our hair!
We looked around for a little three-legged table,
A bottle beautifully labeled, “Drink me”
And finding none resolved to hike on further.

Never mind if people call you dull
Or criticize your freckled dorsal spots
Too sparsely scattered on your pale yellow
Skin, less vivid than your fellow trout,
Those Colorado greenbacks, Californian
Golden trout, the brilliant Yellowstone
Cutthroats, all as lovely as the mountains
That spawn them. Ghost Fish of the Great Basin,
You are the desert made of fading, dusty
Light and camouflaged by floating shadows
Hiding unanticipated beauty
Your throat and fins are lit by alpenglow,
You swim invisible against the pebbled
Stream, judicious with the color red.

I am walking down the dark mountain
Past tumbled boulders of black basalt.
Particles of dust and tiny drops of water
Change the direction of sunlight;

The sky is blue behind high ringlet clouds.
Cartoon rays of light spike down
Painted in the recursive sky above the lake
By some anonymous communist artist.

Sunlight bounces and breaks apart
On filmy sluggish gray waves
Sudden flashes of peacock and gold
Are nothing after all but water, light and salt.

I am walking through the dusty parking lot
Past crayon-colored cars and trucks
Made in factories far away from here.
A woman barks the name of her running dog,

I am following the rocky spiral path
That coils around its watery image
A skiff of brine shrimp cysts drifts
In smokelike wisps of suspended animation.

Primordial soup must have been like this:
Sloshing against black volcanic spew,
Frothy with white, pillowed foam
Stinking of something pickled.

This is Arcadia for haliophiles
Feasting on shining beams of light
I am immense, reaching for a small stone
That glints with square prisms of salt;

Circles ripple from my tossed stone.
A gull screeches for bread in indignation.
Salt burns my wounded feet.
I am standing in the center, spinning.

Amy Brunvand grew up in the Avenues neighborhood of Salt Lake City and went to East High School.  She is an academic librarian at the University of Utah J. Willard Marriott Library where she specializes in government information and environmental/sustainability studies.  She writes for Catalyst magazine, mostly about environmental issues and dance, and has a long, eclectic list of other publications ranging from academic articles to book reviews to cranky letters to the editor. She sometimes writes poetry as well, and some of her recent poems appear in Dark Mountain, saltfront, Canyon Country Zephyr, Kudzu House Quarterly, and a forthcoming anthology Nuclear Impact: Broken Atoms in Our Hands.