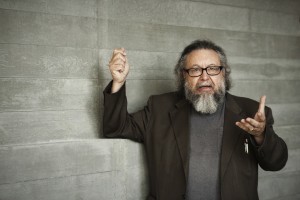 Today, 15 Bytes features Orem-based Alex Caldiero, performance poet and “sonosopher,” a practitioner of a unique hybrid of sound, poetry, and philosophy. Caldiero recalls in verse his emerging passion for performance and for the sensual liturgical marriage of physical space—the church or temple proper—with bodily space.  In our selection today, we’ve included a sampling of works recently published in his volume Some Love (Signature Books).

So curl up with your favorite cup of joe and enjoy the work of Alex!

Between wishful thinking and clear perception

there is a gulf

that resembles the mouth of all the women

you will never kiss.

If (and only if) there is such a thing as

communication at a distance thru the

intervention of no medium save thought

itself by the mind fixed on its projection

toward its object by no rational or obvious

or known method other than the force that

impels or propels it as it were out across

and thru or translates it to the air, borne as

if on wind or wing to its destination by no

other means or conductor than the desire of

the projector who is both feeler and means

for it to spell the message of my heart to the

inner ear of she who is far both in thought

and place and by now out of mind except

for some chance recollection randomized

and let enter as thought and yearning.

for the nipple told me everything

I ever wanted to know.

one planet to another.

If she calls within the hour

it means she will leave me.

If she comes to hear me

it means she still cares.

If she wears the black dress

it means she will make love with me.

If she strokes her hair

it means she has changed her mind.

I work out elaborate systems

of signs and significations

to explain her behaviors

It’s the only way I can

make sense of this relationship

to sustain me for those times

that it doesnt make sense.

I look for these signs

because at times they makes sense.

Dont make a martyr of your

self for the sake of having people

stop and stare at your stigmata.

Even tho it’s only paint, they

come up real close to poke

their fingers in the wounds.

All poems used with permission of Signature Books. 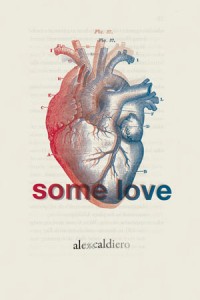 Alex Caldiero is Poet in Residence at Utah Valley University in Orem. One of his students described him as “a weird cat, but someone who loves what he teaches.” He has received grants from the National Endowment for the Arts and Utah Performing Arts Tour and awards from the Association for Mormon Letters and Salt Lake City mayor’s office. You can watch Caldiero perform here.