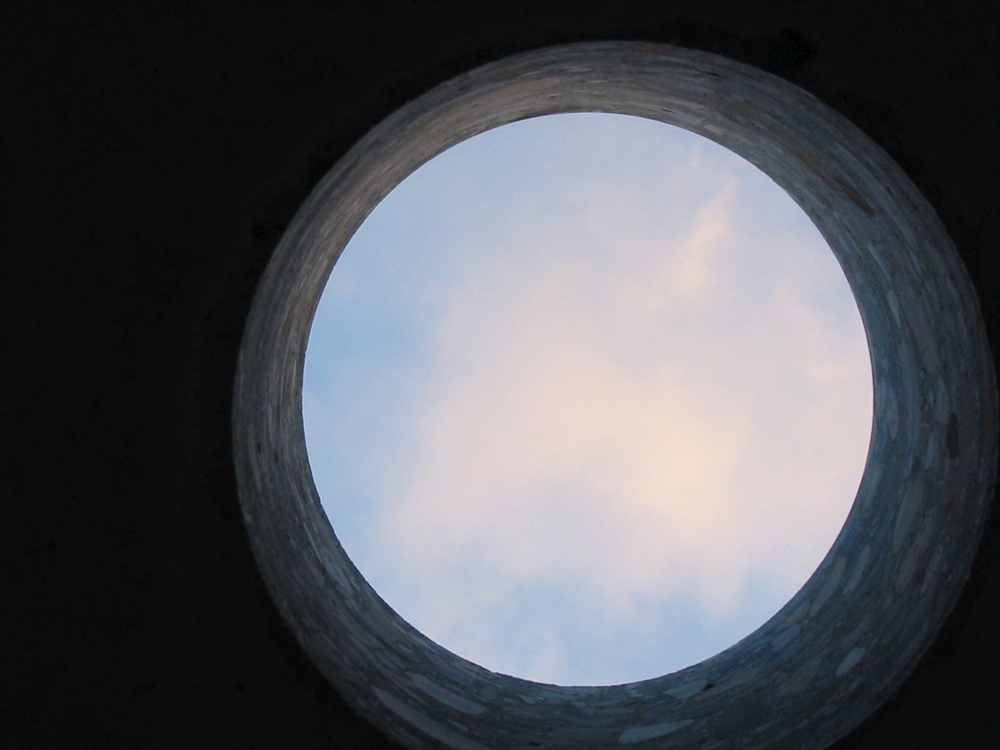 Sun Tunnels at the Winter Solstice

In the ghost town of Lucin, Utah, about nine miles east of the Nevada border, the sun rose at 7:56 a.m. and set at 5:11 p.m. on December 21st. This date marked this year’s winter solstice, the shortest day of the year. For just over nine hours this desert terrain was graced with sunlight. Sunlight streaming thin and weak, sunlight without color and certainly without warmth. The type of sunlight that actually makes one yearn for the warm blanket of night, knowing that the next day’s sunrise will usher in a day that will be just a little bit longer than the last.

Lucin is the town next to Sun Tunnels, the earthwork created by artist Nancy Holt between 1973 and 1976. Sun Tunnels sits on forty acres of land purchased in 1974 by Holt the year after her husband, the artist Robert Smithson (The Spiral Jetty, Great Salt Lake, 1970), died in a plane accident. In 1974, when Holt started to actively work on Sun Tunnels, Lucin had a population of about ten people, give or take a few. Lucin’s remains now include a bullet-ridden sign describing the former town and of course, the railroad. Lucin was the first railroad camp established in Utah by the Central Pacific Railroad as they moved east from California in their quest to meet the Union Pacific Railroad to form and join the transcontinental railroad in 1869. The train still rolls through Lucin, stopping vehicles in the absence of any other human marks on the land.

Traveling on surface roads to approach Sun Tunnels from the north, one passes over these railroad tracks, continuing on graded roads to the forty acres envisioned as a place to draw observers searching for an experience not only with the land but with the heavens as well. Approaching from the north (from Highway 30) or from the south (a graded road runs north and south, parallel of the Pilot Range), one must eventually turn east to reach the tunnels. It’s from this turn that one begins to see the Sun Tunnels on the flat, desert land. Perception is a major component of this earthwork: how do we perceive a work that appears so small and inconsequential from far away, only to watch it grow in size and stature the closer it becomes upon approach? What do we make of four obviously constructed concrete tunnels that blend into the flat, beige, alkali soil dotted with colorless, stunted shrubs in late December?

Parking a stone’s throw from Sun Tunnels (Holt’s request to keep the land around the tunnels free from tire damage) and walking towards the work heightens and shifts perception. The ground in December is hard and crunches loudly underfoot; the alkali dust mixing with a dust of snow. Just as you feel you can firmly place each tunnel in relationship with the others, a step taken to the left or to the right finds one tunnel melting into the other, disrupting assumptions of placement and space. The issue of scale comes full force: the tunnels are large, each measuring nine feet in diameter by eighteen feet in length. Standing in the middle of the tunnels X configuration (a potential “final” destination for this work) affords the most consistent, horizontally uncomplicated view. Moving clockwise or counterclockwise, only one tunnel can be fully viewed at a time, resulting in views of the other three tunnels falling away. In writing of the Sun Tunnels, Holt said: “I wanted to bring the vast space of the desert back to human scale…the panoramic view of the landscape is too overwhelming to take in without visual reference points.”1 Achieving human scale in the west desert is no small feat: human scale assumes a level of intimacy that no mountain or ridge in the region can grace upon us. Taking in the view from each tunnel not only frames the land from our vantage point to distances five, ten, or more miles away, the tunnel’s viewpoint serves as a human scale portal to seeing a new world. 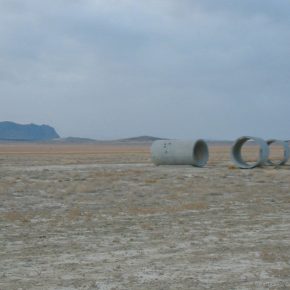 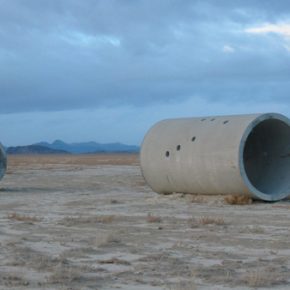 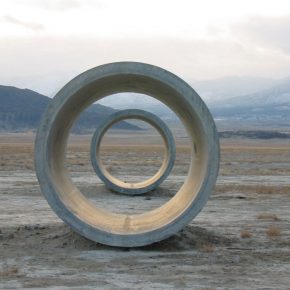 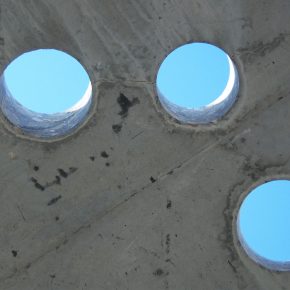 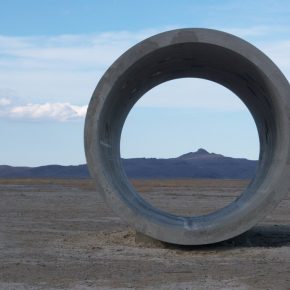 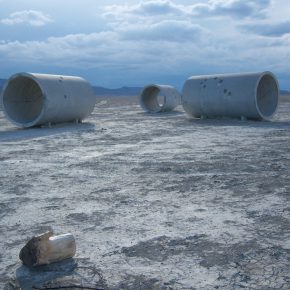 Four tunnels, four constellations: Draco, Perseus, Columba, and Capricorn. Holt had one constellation pattern drilled out of each tunnel, choosing the four constellations with the largest variation of star-size amongst them. Star sizes range in size from seven to ten inches in diameter, offering variation in pattern and view. Each star becomes a micro-frame: if the tunnel frames the land to human scale, each star frames the land to one brief moment in time. This marriage of time to a sense of place is further amplified as human space is linked to an unbounded sense of the universe. During the day, the tunnels are dark and always much cooler than the ambient temperature. Light enters the tunnels through each star-hole, illuminating interior walls in constantly moving patterns as the sun arcs over the land. At night, illumination is often afforded by the moon, casting light through the star-holes onto the bottom half of the tunnels, the spots of moonlight appearing ghost-like inside the tunnel walls.

Each year since 1976, on the summer and winter solstices, the sun has risen and set in the center of these tunnels. The polarity of these two dates each year – the smallest of winter and the largest of summer – points us to the opposing forces that are signified through Sun Tunnels. These round, smooth works occupy a flat land that points in all compass directions to jagged mountains and peaks. Light is brought into the dark tunnels in the daytime; then conversely light is brought into the dark tunnels at night. The difference between earth and the heavens is felt distinctly as the heavens are brought down to us, while at the same time we are lifted up to the stars. Most profoundly, the polarity between our bodies and the land seems almost painfully obvious when first experiencing Sun Tunnels. A shift takes place though, when the striking difference between body and land melts away and these barriers don’t matter. Significant land art allows the differences to disappear.

While building Sun Tunnels, Holt created a video as a companion piece to the work. The film appears as a documentary – time moves in linear fashion as we witness Sun Tunnels from concrete pour to placement in the west desert – yet is a work of art in its own right. Not a word is spoken during the video’s twenty-seven minute duration; the sounds of process and machinery move the viewer along: gravel crunches while poured into molds; a blade whirls its way through the concrete to make a star with the help of water; huge semi trucks zoom past the camera on the Bonneville Salt Flats; the drone of the helicopter drones as we take flight and view the finished tunnels from the air.

Not all is about the machine, though. There is a special shimmer in the air that occurs in the Great Basin; Holt’s camera captures the quality of air, the brightness of light, the stillness amidst collective activity as not only she but many others work to create Sun Tunnels. Without fanfare, the final sound in the video, as the sun descends during the summer solstice, is of the wind picking up. It whistles through the tunnels, swirling around the ground, empty and forlorn. No matter that the sun is golden and rich, never to been seen like this during December. Only when the credits roll after this scene, and the lights come back into the present moment, do we remember that there was a crew filming at the site, letting nature and art on the land do what it does best: transport you. It’s as if you’re the only one on the land, watching the slow descent of the sun, alone with shape and sound. 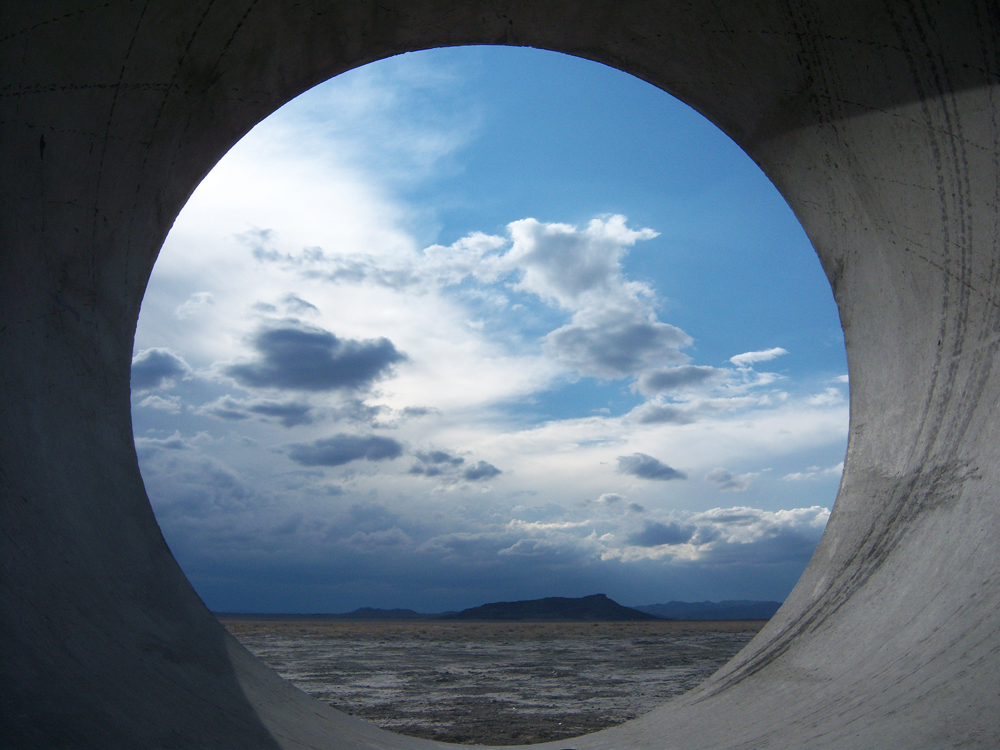 All photos by Hikmet Sidney Loe.