Sweetheart, because your letters make me feel “that certain way” please don’t fail to write them often ‘cause I love them 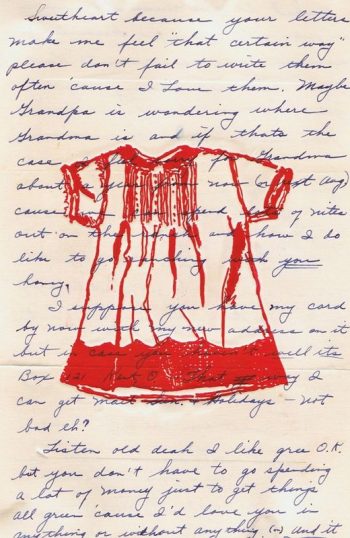 The above is from a hand-written love letter that Sue Bradford used as the background for a solarplate relief and chine colle print, titled “Sweetheart,” of a short dress with straight sleeves and a pleated bodice. Judging from the proportions, it’s a child’s dress, making the print and the underlying letter two separate parts of a process that popular culture would associate with growing up, but the artist is more inclined to view and show as indoctrination. A more menacing version, “Up In My Dress,” instead of a pretty design has on the body an image of a group of formally-dressed old men witnessing one who, sitting at a large desk, signs an anonymous document. Elsewhere a wider international and historical dimension is given yet another dress that is printed on a letter, written in German, and lovingly hand translated. Likewise, in “Geological Survey,” an expansive, detailed version emerges from a larger image printed on a relief map, the pleats and creases of the fabric overlapping and interacting with the elaborate topography of the landscape.

Primary sex characteristics are features present at birth that determine the roles individuals will play in reproduction, assuming they reproduce. Secondary characteristics don’t appear naturally until adolescence, though in humans they are commonly tacked onto a child like a Halloween costume. Their mature purposes are to identify gender and attract suitable mates, but before adolescence they fulfill a very different purpose, generally a form of advance training. This is some of what Sue Bradford’s art is about, and like those naturally-occurring characteristics, her subjects range from blatantly obvious down to the vanishingly subtle, so she has her work, the task of tracking and cataloging the “training wheels” given to girls and young women, cut out for her. Tangentially, it would be worthwhile for someone to do something similar for boys, but it’s not likely: more and more girls know they’re being fitted into a role, and care about it, whereas boys welcome and look forward to what they believe is natural. 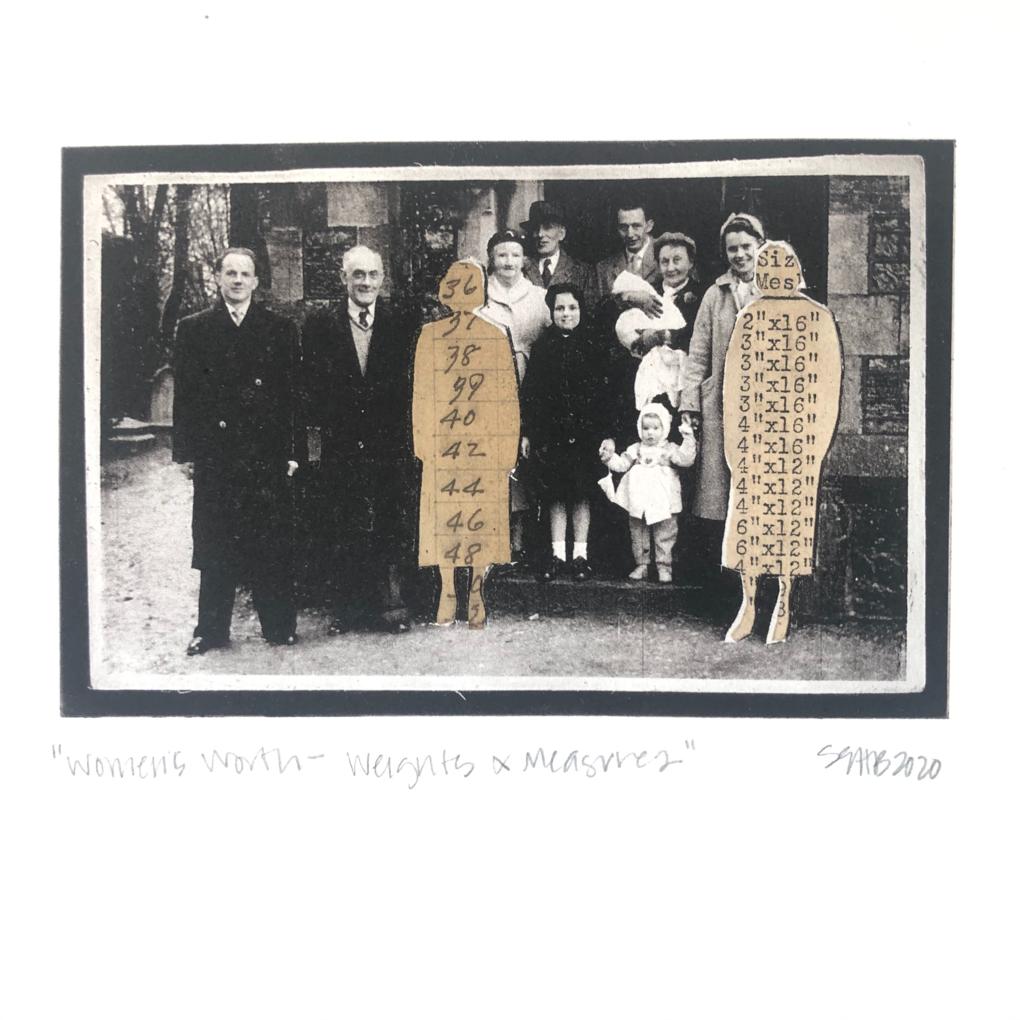 A key element in Bradford’s art, visible in several dozen examples here, is her ability to identify and deploy a treasure trove of found paper documents. By layering them, she closely juxtaposes images of women’s depictions and the reality of their lives. Like the examples cited above, these include dictionary pages with definitions that illuminate the clothing, and vice versa: mend, ascend, teacher; wanton . . . war . . . wash. The artist carves silhouettes out of black-and-white group photos and places them like templates over various printed and hand-written finds. A set of four repetitions titled “Women’s Worth” sees the outlines of two women in a multi-generational family expose a transport ticket book, an immigration document (“Coming and Going-Enter at Your Own Risk”), weights in pounds (“Plain Jane”), columns of fractional dimensions (“Width in Inches”), and columns of typed and hand-written numbers (“Weights and Measures”). The collage “Shadow Voices” includes approximately 75 candid snapshots, in each of which one, two, or all the women have been given various forms of this treatment. Some are filled with and replaced by text, some are left blank, but among the more compelling are those where Bradford has wrapped the backing with string, so that the silhouette projects forward into the set piece, appearing as a cutout bound in coils of rope. 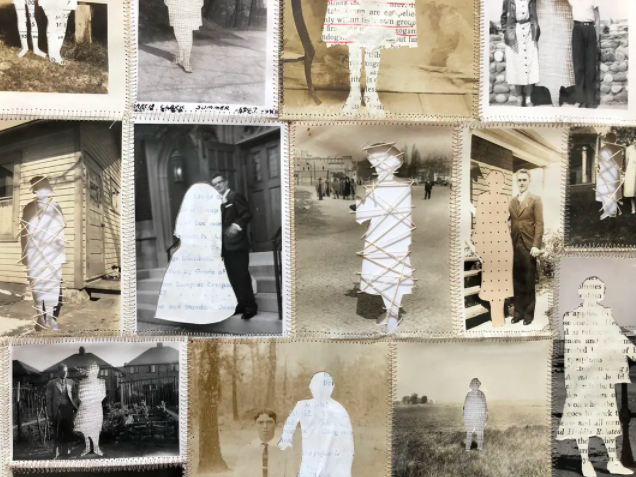 There are so many variations here that a viewer could be excused for thinking it the work of more than one artist. It is, of course, women who typically, wisely collaborate in social groups, like quilting and knitting societies or, for that matter, book clubs. But it’s also common for a singular artist to experiment like this, alone in a room, ranging over several ways to get at what she wants to make, then eventually settling down to a few things that work. Later, scholarly retrospectives may rediscover the steps by which something unprecedented evolved into being. For the alert and sensitive, there is an aura of magic woven through the gallery: the power to materialize something that was invisible. At times, the hair may rise on the back of your neck. 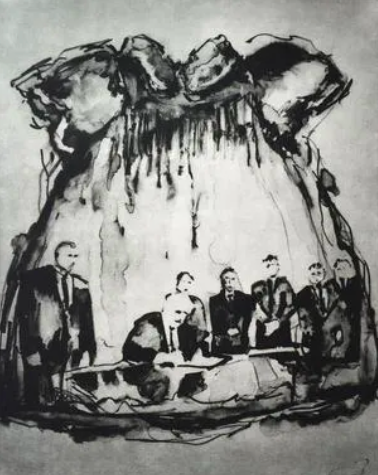 In a sense all art is new: new iterations of well-practiced methods. Then there are the times when an artist must necessarily find a way to force her ideas through a thicket of material, and the result is truly new, previously unseen. Such art can be a joy or a challenge to come across. One way of telling is the solitary person standing with her notebook in front of a work and writing or drawing feverishly. There were visitors at BDAC peering at Sue Bradford’s wall after wall of dresses and figures with that intensity.

Fans of Victorian or Jane Austen dramatizations will be only too familiar with the scene where a male guest enters and all the women hurriedly pull off their aprons and pinafores and, blushing, stash them out of sight. Sue Bradford shows how those functional garments, and others meant for children, have adapted, which is to say evolved, in sophisticated ways over years of use, and have acquired a dignified correctness that shows in the aesthetics of their designs. Her depictions of these elegant designs are eloquent recapitulations of an overlooked universe of human experience. It’s really not possible to say as much about them as they do when she helps them speak for themselves.