The great 20th-century American photographer Paul Caponigro once remarked, “It’s one thing to make a picture of what a person looks like, it’s another thing to make a portrait of who they are.” Though initially it may have been lauded for its functionality, portraiture quickly became one of the most important genres to span the whole of art history. In addition to expressing the wealth and status of an individual, much can be learned from the way media and artistic processes are used to portray the intimate relationship between the artist and the sitter. Marcus Vincent, Bruce Robertson, Amy Bennion, and Gareth Fry—all featured in the Utah Valley University Faculty Art Show 2018 at the Woodbury Museum—are pushing the boundaries of traditional portraiture and engaging with contemporary depictions of humanity in its individual and collective forms. 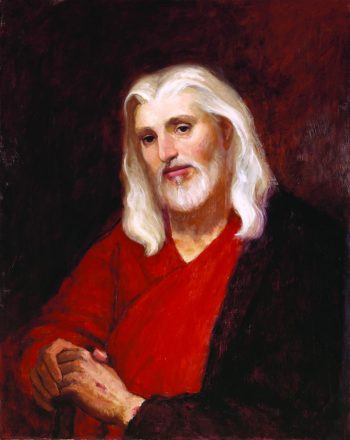 Marcus Vincent’s work, “Man in Red,” brilliantly defamiliarizes the familiar. Drawing on several art historical references from the Dutch tradition of the mid-1600s, the painting both quotes and challenges assumptions about the image of Christ. The artist has been developing the work for more than a decade as a matter of personal interest and experimentation. The pigments and facial expression immediately recall the works of Rembrandt and Goltzius while simultaneously putting forth a new interpretation of the subject through Vincent’s choice of pose and hair color—making it the only image of its kind. Although it is ambitious to attempt to make new the most famous subject in portraiture, Vincent’s work—though unique—arrives at perhaps a more truthful representation. Vincent elaborated:

“Typically western modern painters present a Jesus that seems to be a Norwegian athlete or football player: large chested, golden brown hair, heroic proportions, chiseled jaw – almost like a superhero in a comic novel. The Jesus of American art is co-opted into an ideal that might be more at home on the cover of a GQ magazine, or as some heartthrob in a women’s publication of some sort. It begs the question that is asserted in religion that man was created in God’s image – or was it, rather, that man creates God in his own image – or at least in the most desirable form of the day.”

Apart from the hands, no model was used in the creation of the portrait. Instead, the artist relied upon historically correct details of people from the time period in order to offer up a refreshingly foreign representation. Vincent’s work stands out among others in the exhibition for this reason and poses a vital question to the viewer: “How much is our mental image of Deity dependent upon our conviction that God is just like ‘me?’” Vincent’s interpretation of Christ is a welcome change and speaks to the intimacy that can be achieved within the genre of portraiture. 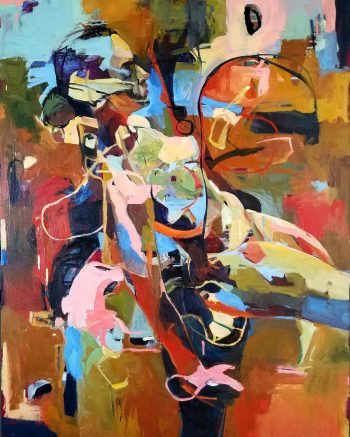 Bruce Robertson, another faculty member of UVU, combines both the abstract and the figural in his innovative portrait of “Aubrey.” Painted from life, the artist worked from four different angles of varying scale. At first glance, the piece doesn’t look like a portrait at all; rather, the viewer is overwhelmed by a vibrant display of color and line that engages the eye but nevertheless seems nonsensical. However, after a closer look, a reclining human form reveals itself from behind the layers of pigment. Once realized, the abstract and figural then begin to work together to convey a sense of who “Aubrey” might be. But which came first: the hues or the human? According to Robertson, both played an equally important role in the initial stages of creation:

“For a while I responded intuitively to the abstract nature of the developing painting. Then changing my focus from the abstract to the representational, I began working directly with Aubrey in a more sustained manner. I tried to achieve a likeness of her, while at the same time acknowledging the abstract forms created by the overlapping points of view. It wasn’t important to me to try to save any recognizable early reference. I just focused on the structure of her face and the lines of her body and how they correlated with the abstract marks that had developed on the canvas.”

For Robertson, the process was as much a part of the final product as was the actual portrait. What at first seems to be a cacophony of color reveals itself to be a beautiful young woman, whose form is enhanced by the chaos around her. “I like engaging the viewer this way,” the artist remarks. “They are rewarded for spending more time with the painting.” This, in part, is what makes the experience of the viewer so profound: it parallels the human process of coming to know and see another person.

The interaction between process and materials is also important to Amy Bennion. Her larger than life portrait “Cat (Alice)” is created from a unique combination of media: rice paper, Mylar colored pencil and thread. While some may argue that some aspects of the materials are difficult to work with, the malleability and surprising strength of the paper allows the artist to manipulate the figure and forms in real time. Bennion’s deliberately chosen media further communicates her artistic philosophy about the portrait:

“I’ve always felt a heavy responsibility when using someone’s image to be authentic to their experience, and to be authentic about my connection to their story and/or our relationship. As I tear the paper, the fibers fight against whatever direction or shape I’m trying to force into the paper and it becomes very much a dialogue with the material. It won’t let me impose my ideas on it without a bit of resistance. This fits with my philosophy of the portrait somehow — I can’t impose my aesthetic on my sitter’s image without feeling the resistance of their personality and will. It is a collaboration with the sitter and a collaboration with the materials.” 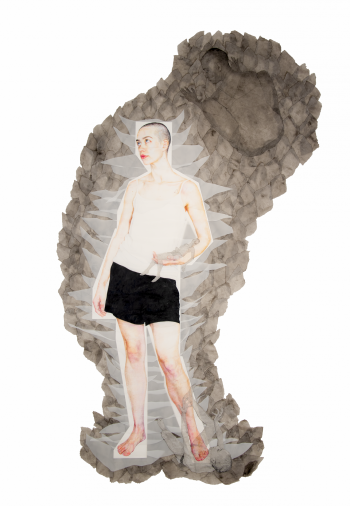 The fragile but durable collage of Cat hangs delicately on the gallery wall. As the viewer interacts with her, his or her own shadow adds an additional layer to the composition. Bennion cleverly draws upon famous formal archetypes, such as various depictions of St. George and the dragon, Michelangelo’s Pieta, and Hieronymus Bosch and William Blake’s depictions of demons and devils, among others. Cat is seen first in her lifelike, colorful form, but upon closer observation interacts with smaller, demonic versions of herself. The internal struggle and conflict that typically can only be assumed in traditional portraiture is realized externally in Bennion’s work. In this way, Cat becomes a sort of Everyman figure, representing the whole of humanity in its attempts to conquer the darkness within.

By far the most nontraditional representation of the human experience in the exhibition is not a portrait at all. However, the effect and principles conveyed are largely the same. Gareth Fry’s two-part installation “You, Me, Us” represents shared concerns categorized in three ways: people, domain, and nature. Each are represented by the three towering 8-foot-long typographic and photographic posters that hang side by side. An accompanying structure suspends numerous small cards from nylon cords that move gently in the air. Fry’s description of this second part of his installation is compelling:

“Each of these cards features personal disclosures shared candidly and anonymously by dozens of different people. Some are funny, some are inspiring, and some are heartbreaking, but as a whole, they represent the wonder, diversity, and vulnerability of the human heart and mind. The appearance is light, airy, and inviting, and it’s very fitting that the structure gently sways and rotates as people pass by and bring the artwork to life.” 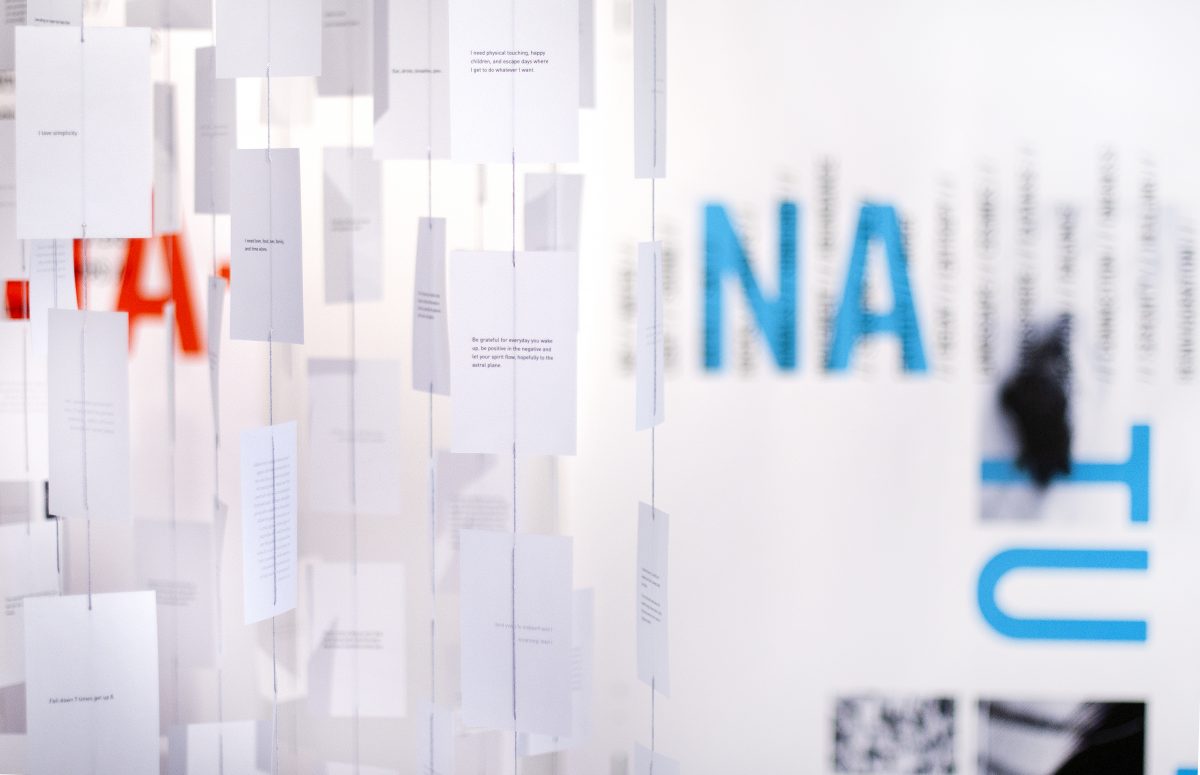 In addition to his inclusion of the voices of individuals and their collective representation, Fry’s work is also heavily influenced by his training as a graphic designer. The installation shies away from the commercial emphasis of the field and instead focuses on meeting the needs of the individual. For Fry, this installation is a “call for greater empathy, respect, and kindness in all our personal and professional interactions.” “You, Me, Us” successfully achieves this aim and, although the work is more textual than representational, functions in a strikingly similar way to the other portraits showcased in the exhibition.

Marcus Vincent, Bruce Robertson, Amy Bennion, and Gareth Fry are just a few of the many artists featured in the UVU Faculty Art Show. A mélange of media, subjects, and ideas awaits the viewer at the Woodbury and offers something for everyone. Whether it is portraiture, photography, sculpture, or multimedia installations, the museum is worth the visit.