Up and Down The Creek: Stephen Goldsmith on City Creek

I was downtown recently when my cell phone rang. When asked where I was, I said “City Creek,” and the caller assumed I was on a hike in the canyon, a place I love and visit often. But I was neither in City Creek Canyon nor on Main Street, but rather above it in City Creek Center’s air-conditioned connecting bridge, decorated inside with old photographs and maps of our historic downtown, a downtown with four generations of my family’s life and livelihood etched into its streets. 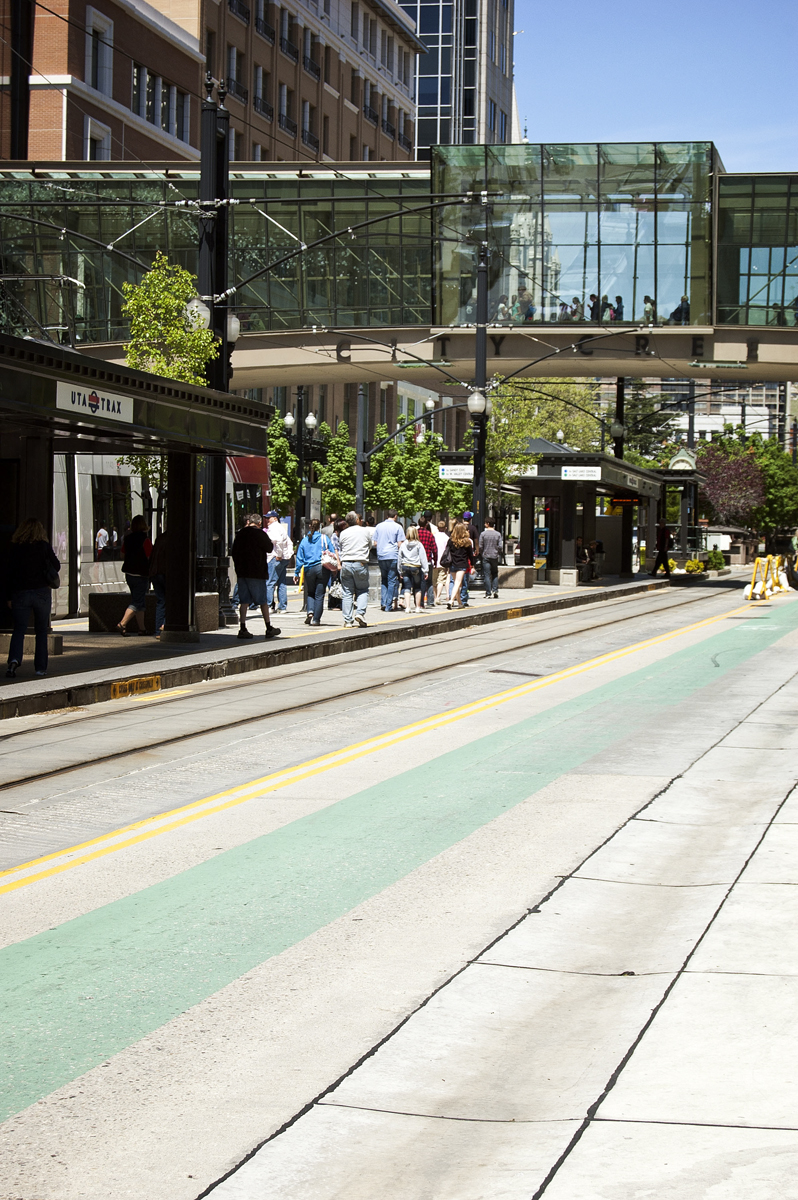 The call reminded me of our confusion about place, in part because of the developer’s appropriation of the historic creek’s name. That this has emerged is a surprise to no one who loves our city, our seven canyons, and our shared oasis on the edge of the desert. Just as we have buried our creeks throughout the past century and a half, we are burying our heads about the importance of authenticity.

Fortunately, one of the elements originally proposed for the bridge, an electric walkway, was eliminated during the design process. This was partly as a result of its expense, but mostly because of public ridicule. I stood there grateful for the community pressure placed on the project’s owners, pressure that helped guide the design and development team to make better choices.

Community pressure didn’t stop the City Creek Center Bridge from being built.|0| According to co-developer The Taubman Company, not allowing the bridge would be a “deal killer” for the entire project. Permitting sky bridges downtown was written out of the city’s zoning ordinance in 1995. The decision followed a heated debate eight years earlier when Zion’s Securities Corporation attempted to build a bridge across First South at Regent Street to connect the ZCMI Mall to the Regent Street Parking structure.

Permission to build that bridge came only after a prolonged battle with community activists, a battle I led at that time and would bring forward again with the City Creek proposal. It was solely the result of an epiphany by Zion’s Securities’ CEO Kent Money about the potential the bridge had to scar the city that it was never constructed. If it had been, it would have been torn down to make way for City Creek Center.

My objection to sky bridges is because of their potential to disrupt the social life of the street, undermine the role of the street in our democracy, and create two-tiered societies — what might be called first-class and second-class citizens. 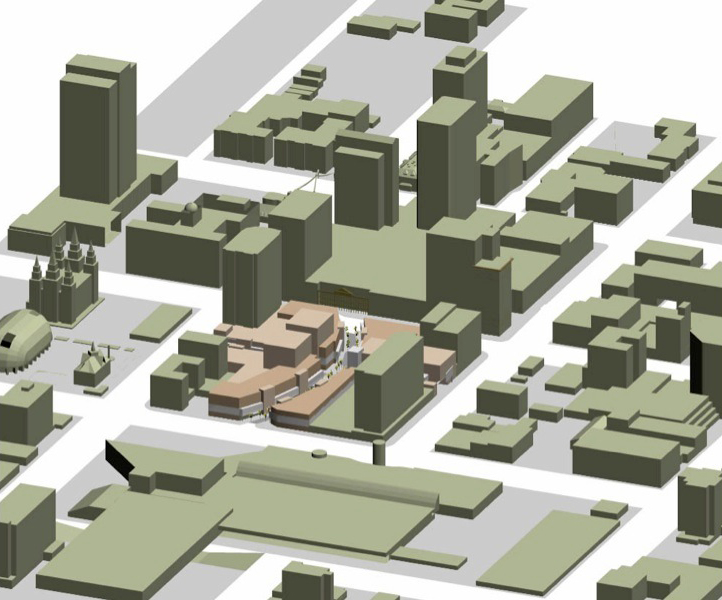 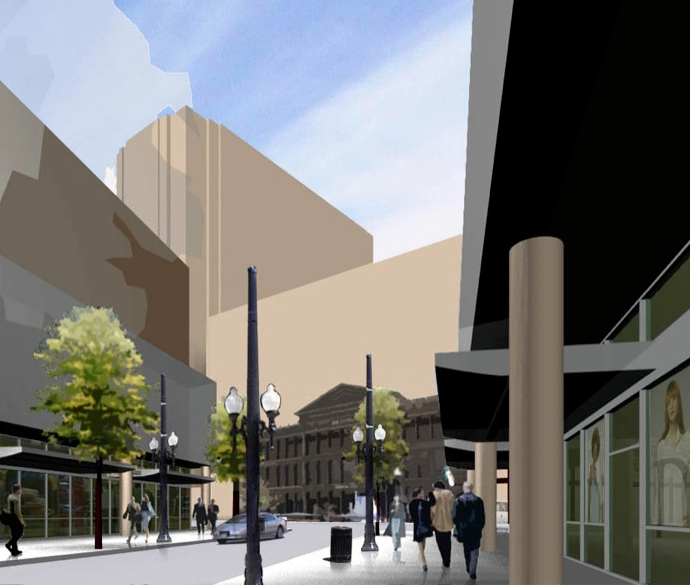 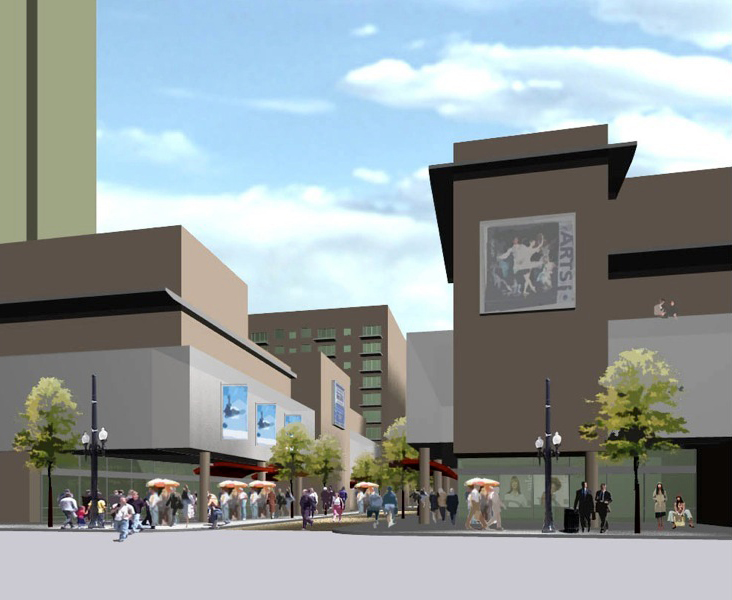 In 2002, during my tenure as the city’s planning director, I attended confidential meetings about the future of Nordstrom in Crossroads Mall. That ill-conceived and even more horribly designed mall was dying, and along with the fear of losing market share to malls south of the city, people were worried that Nordstrom would leave town and take with it part of the community’s self esteem. In response, and much to the entertainment of my friend and boss Rocky Anderson, I engaged two of the city’s finest architects to draw a simple schematic plan showing how the Crossroads and ZCMI blocks might become mixed-use blocks that could bring 24-hour life back to the heart of the city.

I took the drawings to the Presiding Bishop of the LDS Church who graciously listened to the reasons why such a proposal might hold Nordstrom’s interest in staying downtown. About a year after leaving my position as planning director I learned that Bishop H. David Burton was actually interested in moving forward with the idea. The power of a short stack of drawings to feed ideas is emblematic of the power of visual literacy. 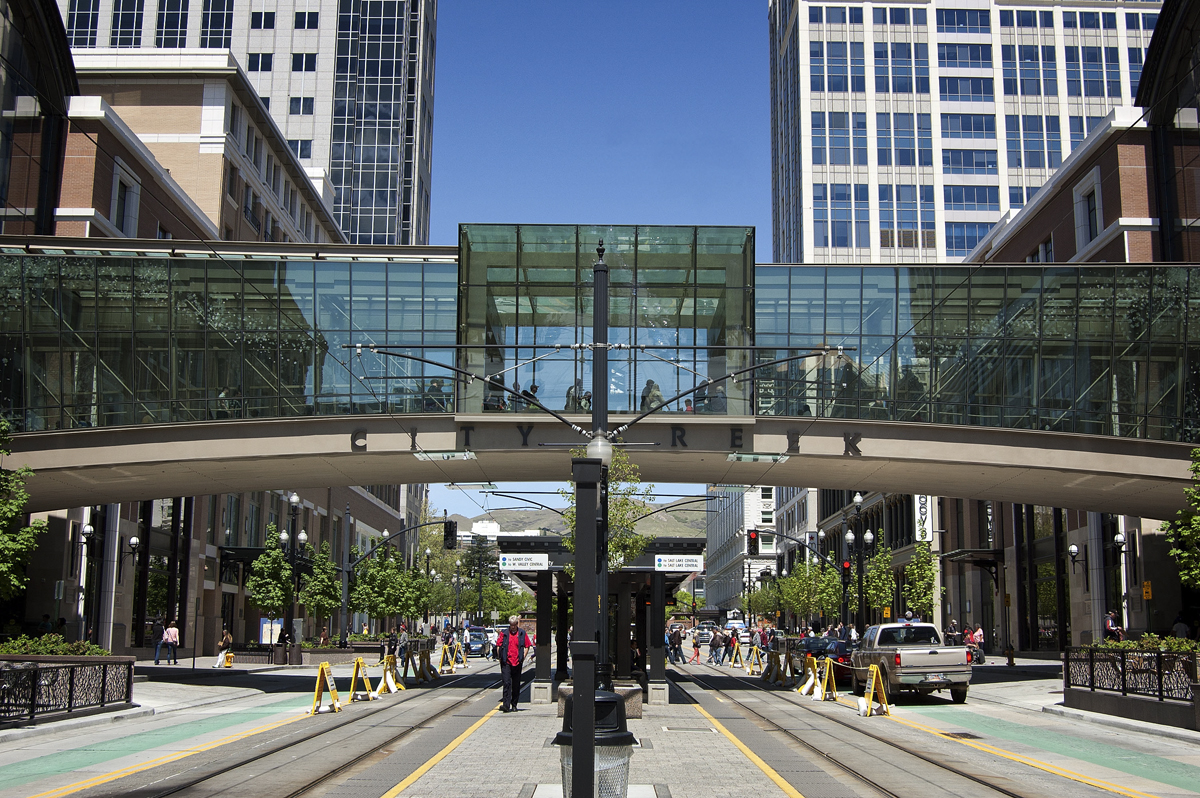 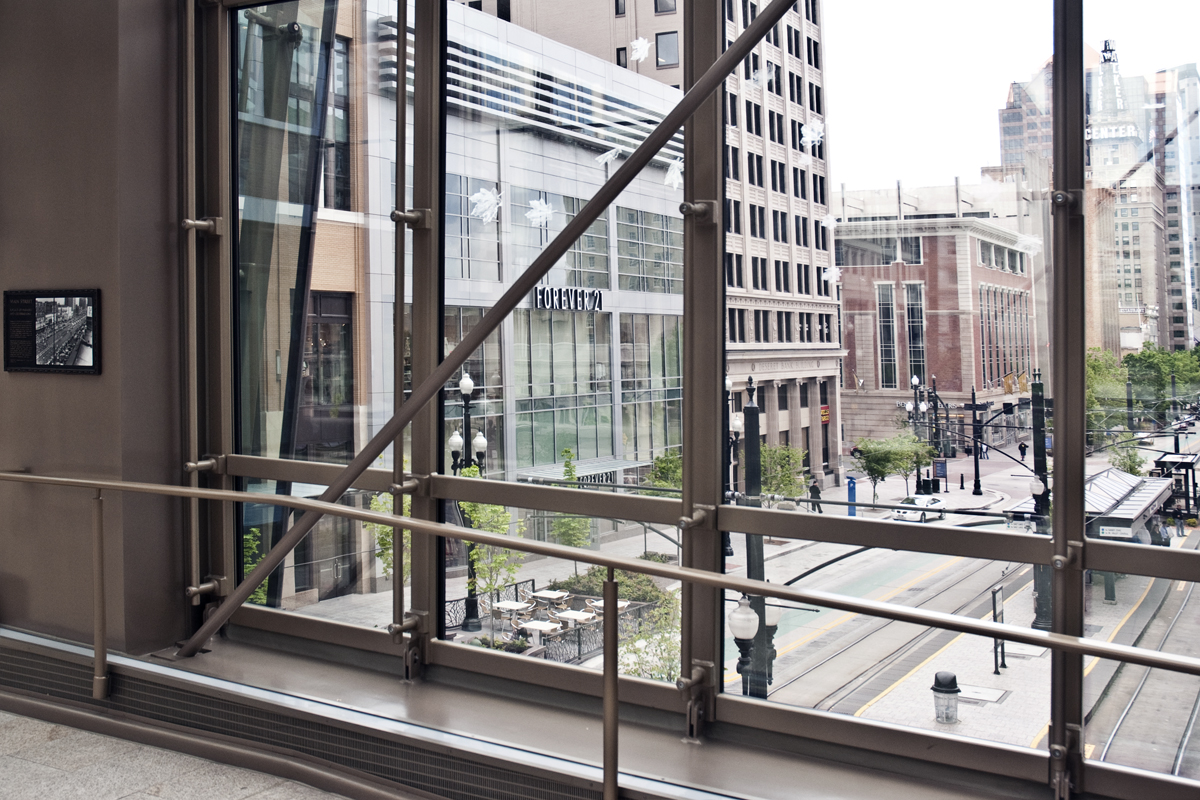 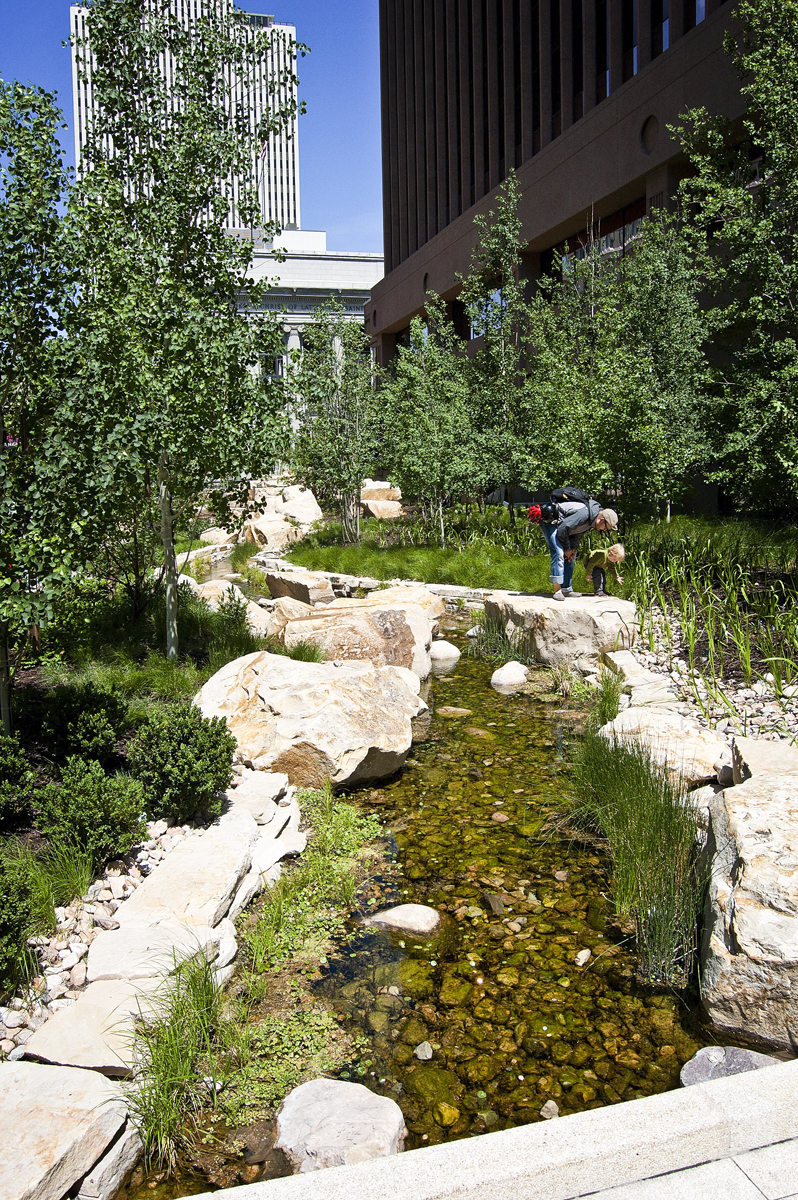 A manufactured creek runs through the development

That a mixed-use neighborhood has been reborn on these two blocks is evidence of hope and evolution in our city despite any other shortcomings of the City Creek Center project.

Ironically the City Creek Center Bridge may be the most notable and meaningful part of the entire mixed-use complex. The bridge’s structure frames what we’ve lost and reminds us to remember what matters most to us; our connection to place. Within the bridge the historic photos show a different ballet on Main Street. They reveal the way our city and its streets held its parades, fed our social space, supported our democracy.There is a richness and wisdom of the street in these images, qualities that are clear and visible in the old black-and-white, low-resolution photographs. One can hear the street if one listens closely to what they see in these old photos. Sadly, when I stood in the bridge and looked east and west there was nothing that drew me in. Tiffany’s doesn’t work for me, and the artificiality of the manufactured creek with its captive trout in Ph-balanced water drowns my spirits. I prefer the City Creek that flows through Memory Grove, and streets and sidewalks etched with decades of stories. 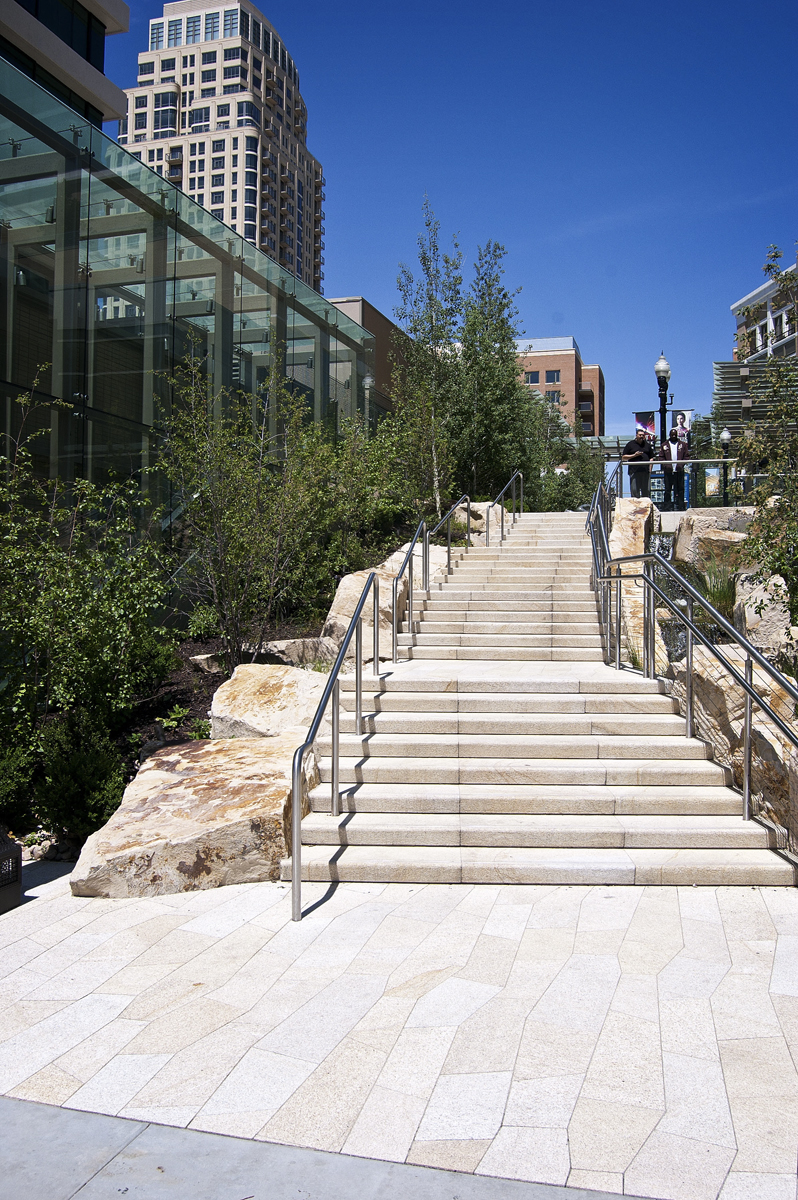 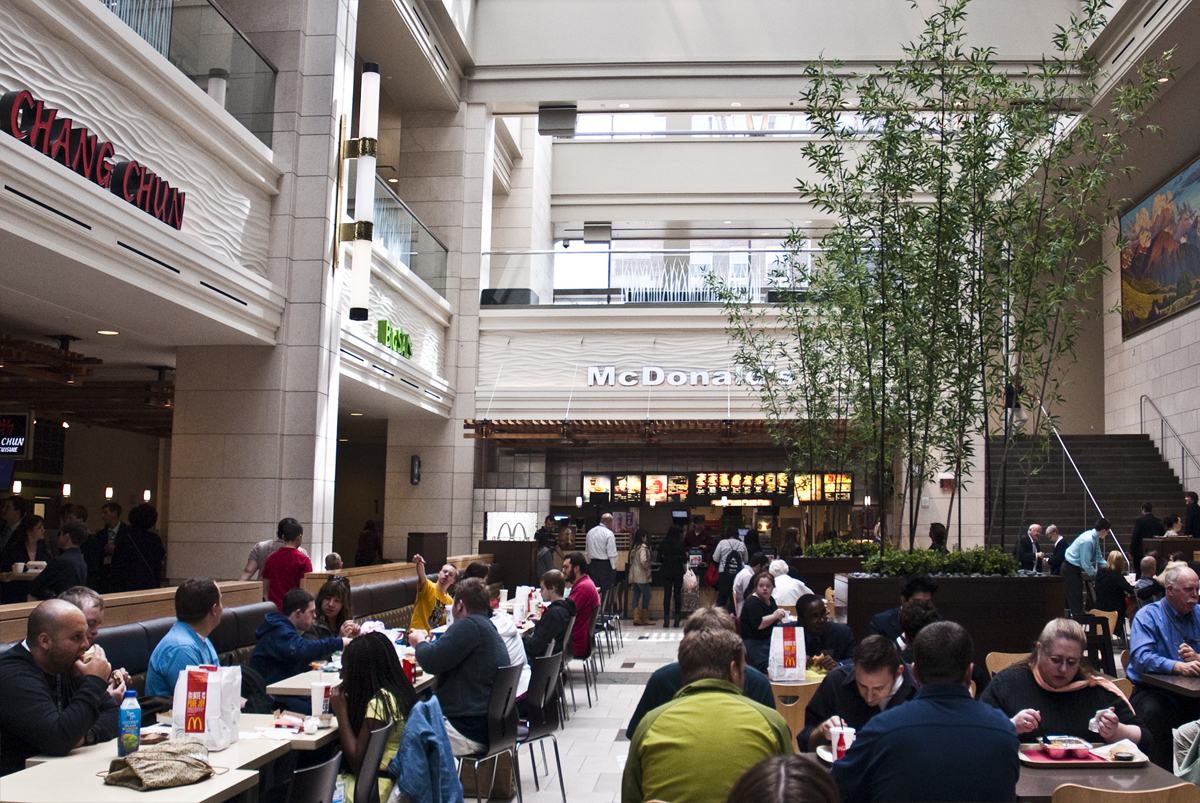 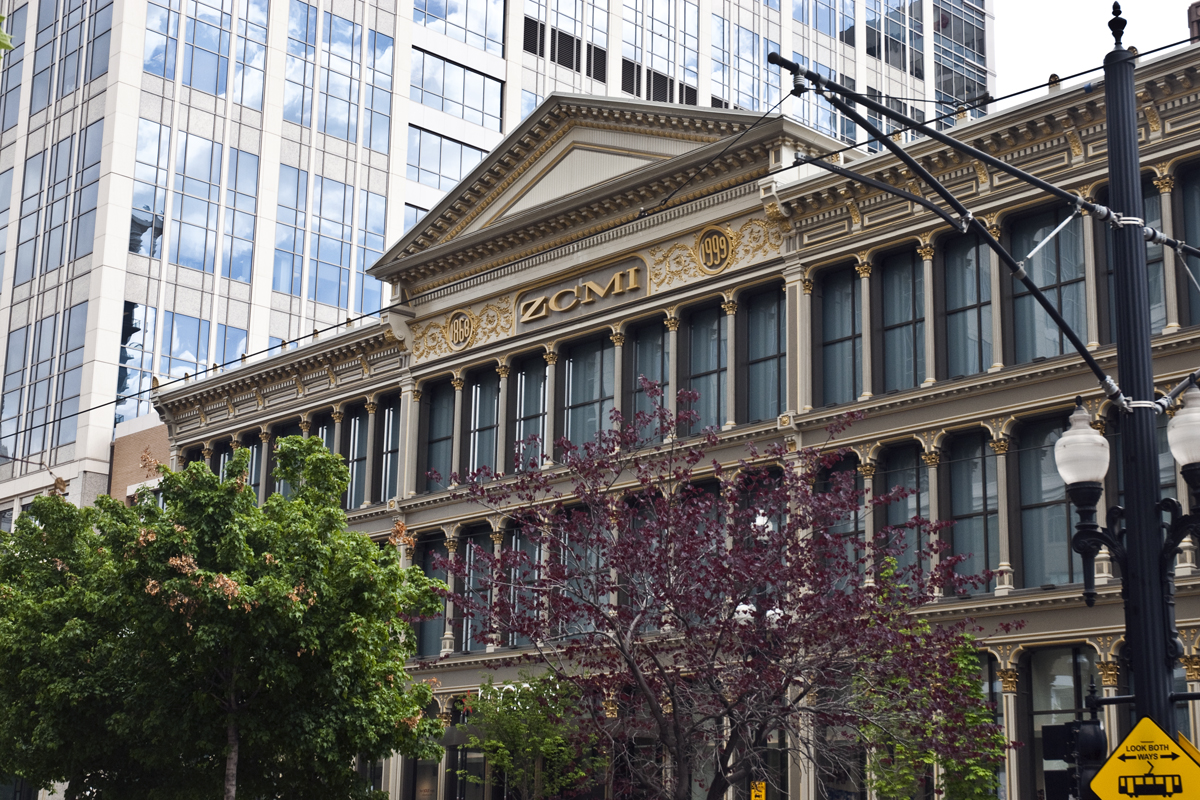 But for the voices of residents and some city planning commissioners, and a few planning staff members, the project would never have reached its few, but important levels of excellence. Some fine craftsmanship can be seen on the surfaces of this new temple of consumption, but craftsmanship is perhaps the high-water mark of the entire project. It is a tribute to the men and women in the trades whose hands and care for excellence invites the oohs and ahs of those who naively believe that a gilded lily is still a lily. Stonecutters and masons, metal workers and engineers show their stuff at City Creek Center. The flow of consumers wanting to buy local gold at Tiffany’s, crafted by out-of-state craftspeople will be seasonal. Ebbing in January and flowing again with the Mother’s Day thaw, their claim on Rio Tinto’s Kennecott byproducts will transform love into money and money into love. We would be better served to find our local craftspeople crafting our local gold.

We would also be better served if more local restaurateurs had found their rightful place in the capital city’s new palace of consumption. Consuming “first class” fare from McDonalds, The Cheesecake Factory, Subway, and Chick-fil-A while not the only options in the food court is a menu for ridicule when addressing the authenticity of a place. Those who recall the near-magical attraction of the old ZCMI bakery still have sense-memory of those cold days when a warm piece of bread and a healthy spread of Beehive State honey was a step away from the sidewalk. 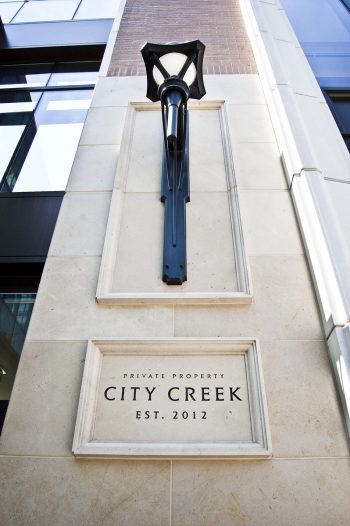 The few entrances into City Creek Center from the street are all too reminiscent of the controlled entrances of their predecessors. In the early 20th century the eight block faces that comprise the circumference of City Creek Center held as many as 100 entrances to shops, banks, offices, restaurants and theaters. Now we have maybe 20. At the mall’s primary entrances the count is a mere eight. In a horrible lack of oversight, the stairwell entrance from West Temple, north of Nordstrom, a stairway to nowhere ended in a fence, requiring me to descend the staircase and attempt the ascension again.

The control as one enters the Center is also marked by clear signage reminding us how to be civil and describing the consequences if our civility is suspect. Once one enters, the citizen is now the visitor in a private place and, as noted by the directories at each entrance, “…management reserves the right to prohibit any activity or conduct which is detrimental to or inconsistent with a first-class, family oriented shopping center.” Taken to its extreme, a grandparent living in one of the first-class towers whose grandkids run and yell (running and yelling are listed as prohibited) during a stroll to the Disney Store would be both consistent and inconsistent with a first-class family place. As our community works toward understanding the diversity of use that mixed-use developments attract, we will one day reconcile this confusion of place. 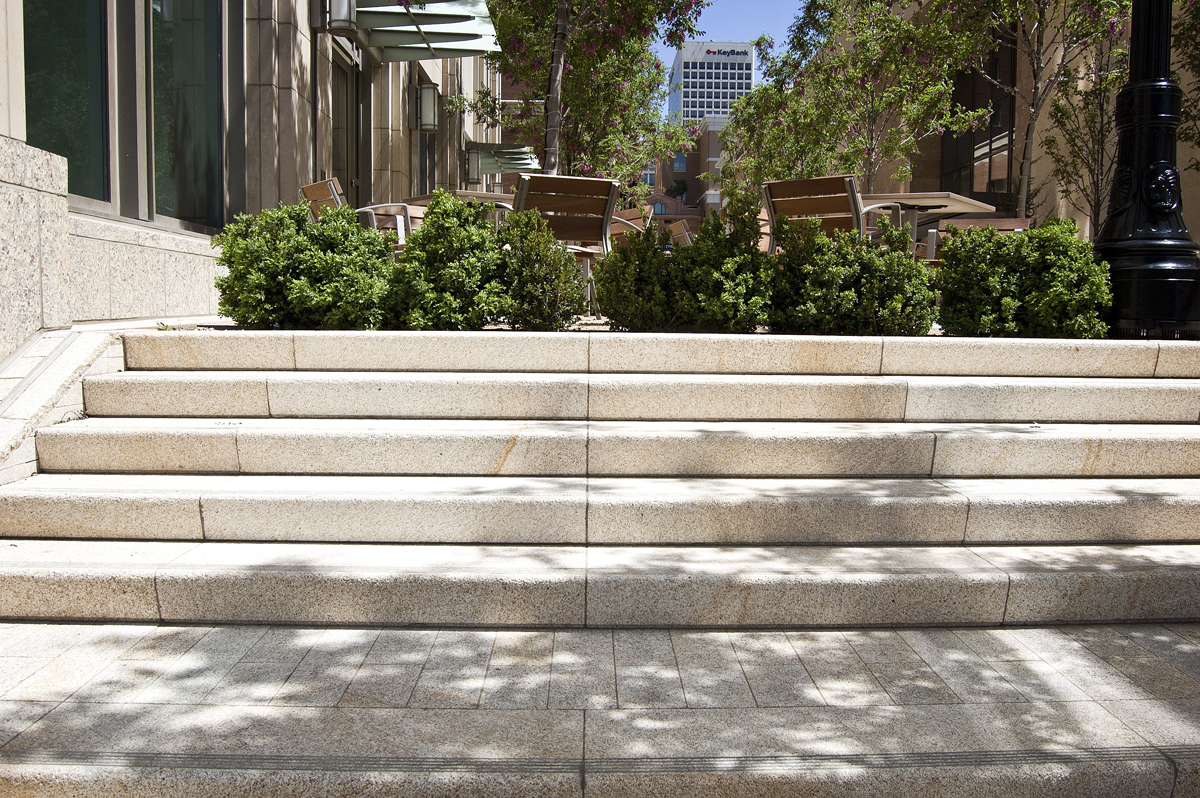 Just as planning experts promised when they built the Crossroads Mall, that it would help all of downtown, so too with the planning and development experts who promoted City Creek Center. While the intelligence of mixed-use found its way into the project this time, the same formula to reduce spillover into the surrounding downtown and capture market share within the new mall is at play again. Though the Salt Lake Planning Commission insisted on a few more access points to promote some spillover, it’s insufficient at a project of this scale. Few people understood the impact this project will have on downtown retail for perhaps the next 20 years. The street-front footage of the mall’s retail facades is the equivalent of eight blocks. In other words, two levels of retail on the Nordstrom block is the same as having retail on both sides of Main Street from South Temple to Second South. Add in the Macy’s side of the mall and its two floors and we have the equivalent of retail on both sides of Main from Second South to Third South, then up both sides of Third South between Main and State Streets. The vital downtown of the 1930s through the mid-1970s comprised this same mile of retail. Yes, City Creek Center’s retail facades comprise roughly one mile of street retail.

My view from the bridge left me wanting more of what I saw in the old photos there. This is not a romantic or nostalgic longing for something missed, but a desire for that grit of a street that speaks to its humanity, its honesty, to its first-class democracy. These are the kinds of streets that can’t be designed by any one person with an architectural firm. They evolve from thousands of unique gestures, over many years and decades, with stories etched into the street itself.

Confusion of place is evidenced wherever I walk within and around this could-have-been-great place. A clear line is drawn between public and private where City Creek Center meets the city sidewalk. The line is literally cast in bronze. The porous line that blurs and separates public from private space is of greatest concern. The democracy of the street is threatened with these obfuscations, and we should be vigilant as we watch for the insidious grafting of the most important vessels of our city, its sidewalks and streets, the vessels that connect us all. 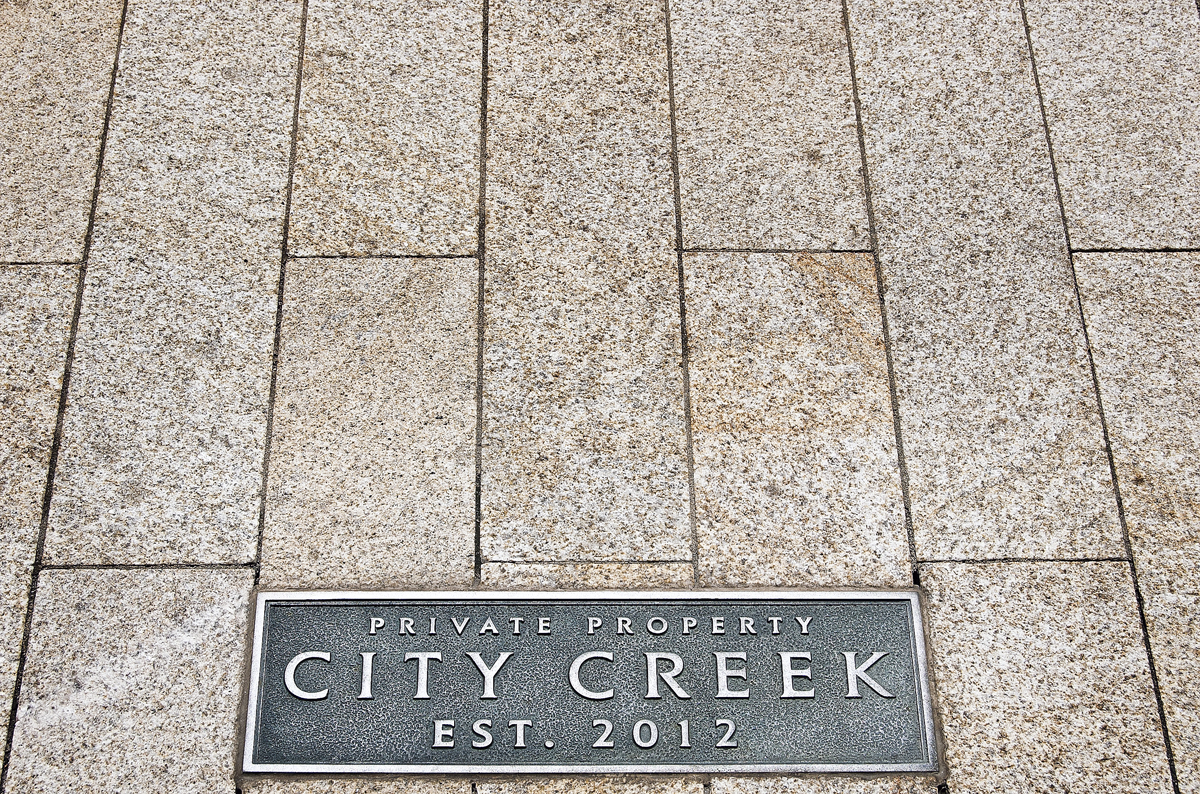