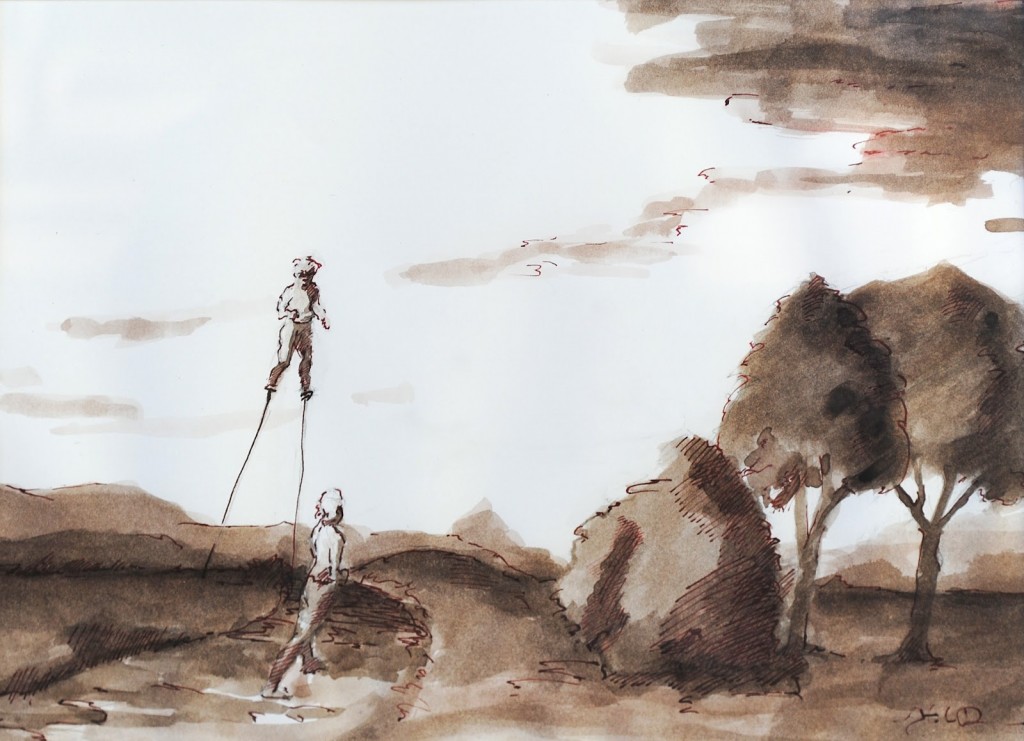 True authenticity is a rarity in artists.  Authenticity must not be confused with the breakthrough or enigmatic qualities of the “cutting-edge,” which is popular and in vogue.  The rarity is found in the outsider artist, who remains true to misunderstood, uncommon ways.  This defines Stephen Duncan.  Educated in traditional forms of art-making, Duncan chooses to adhere to historical means and methods that establish a connection with the tradition he feels deeply and passionately about.

The vehicle for Duncan’s traditionalism is ink wash drawing.  Originally drawings were preparatory works, outlines for altarpieces and frescoes or cartoons for woven tapestries. Eventually, artists like Watteau, Fragonard, Greuze, and Chardin elevated the rudimentary materials of chalk, ink and pencil into mediums for impressive works in their own right, with expressive qualities equal to tempera and oil paint. Duncan continues this tradition, using time-tested, hand-crafted processes to create lively works full of simple sensuality.

Duncan begins with a husked walnut, which must be opened to release a dark viscous substance called hull.  This is seeped, put in a saucepan with water and boiled. After much of the water has evaporated, the remaining thick substance is strained through women’s nylon to produce ink that is ready for work.

Duncan uses this natural material in broad washes and fine lines in fanciful works that delight.  Absurd figures, high above ground, walk skillfully on towering spindly spider leg-like stilts.  Secondary characters express unfathomable normalcy in the face of the absurd, while the stilted ones march onward like pilgrims on a pilgrimage to nowhere.  These works, some of which were recently exhibited at Charley Hafen Gallery, are reminiscent of Goya’s early “caprices” — where children prance merrily around a Maypole, men brimming with machismo strum their guitars, and women dance the flamenco with a hint of immodesty. Duncan’s Charley Hafen exhibit was billed as exploring “the trees, the trail, the sunlight and the skyline” of the Jordan Parkway, but the works reveal little trace of the contemporary world and have about them a tangible, timeless presence.

For their lush simplicity melding profound sensuality, these are astonishing and invigorating objects of beauty.  For their curious wonderment these washes that defy time and space are extraordinary documents of a timely tradition, a tradition with secrets imperative to maintain.

If you missed Stephen Duncan’s work at Charley Hafen Gallery, you have another chance to see them this week at the Poor Yorick Spring Equinox event. On Friday, March 22, from 6-10 pm artists’ studios will be open to the public. Browse art while you listen to the smooth sounds of the Salty City Cello Band. You’ll find Duncan’s studio at C1. You can also see his work at his website: steveduncanart.blogspot.com. Poor Yorick Studios is located at 126 W Crystal Ave (2590 S), South Salt Lake, Utah 84115.