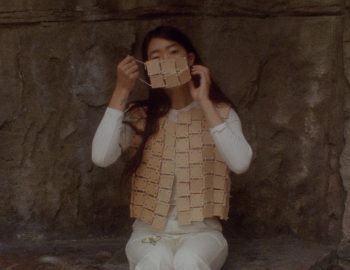 “law-making is power-making, assumption of power, and to that extent an immediate manifestation of violence…”

—walter benjamin, “toward a critique of violence”

office space is proud to announce self-armature which is stephanie mei huang’s debut hybrid physical/online solo show at office space within the chettinad house space located in downtown salt lake city. the gallery presents the artist’s series of six complex pieces of video art both in the gallery space as a looped series of videos on a computer as well as here on the online platform for a wider audience.

three pivotal videos from huang’s examination of the asian-american femme body in correlation with the simulacra of american manifest destiny as well as the concept of armor from multiple perspectives such as personal, historical especially with an angle of the military-industrial complex, and cultural subvert the racist stereotype of the “yellow” feminine body as meek and subjugated for visual and physical consumption by the public rooted in colonialism. in self-armature iii (at the Los Angeles Police Academy rock garden above the shooting range), huang examines multiple issues profoundly through a performance piece of weaving together a clay exoskeleton that resonates with the idea of figurative self-defense, the history of clay pigeons as targets, and self-empowerment against psychological breakdown and outside forces of violence against the marginalized. the artist suggests that the police state becomes the overlay of institutional, mostly white supremacist, violence and law against asian-american bodies especially those of queered femmes, the internecine web between law and violence, and the idea of armature as the skeleton of the physical body as well as the body politic, which in america has been unraveling slowly since the reagan era and its militarism and kernel for the american police state. using a montage of police artifacts of badges and uniforms as well as diegetic noises of gunshots at a police range the artist also analyzes the geographical materiality of the los angeles police department’s territory such as the shooting gallery as a physical and symbolic skeleton for nationalist fascism rooted in anti-blackness, systemic oppression, and the targeting of asian americans via white settler colonialism. both yellow porcelain videos probe both the materiality and historicity of ceramics as a primeval anthropological matrix for self-defense to protect vulnerability which is not the same as the mythology of asian feminine vulnerability, a flashpoint concept for the current spate of white supremacist violence against asian-american women during the past few years of the trump and post-trump eras. here the artist, in deliberate performative actions, masks her head or face using clay while either standing or lying down upon the ground of rock or soil. in one video, she wraps the material around her own head completely to form a sculpture that puns on a coiled pot as well as a medieval knight’s helmet with its face guard; this implication ties back to the colonialist violence of the crusades which has framed many concepts of white supremacy embedded in german nazism and current-day american policing. within the other video, huang crafts a facial mask which resembles a facial treatment covering that is an implement at asian spas across the united states; the mask is discarded upon the ground at the end of the segment that corresponds to the shedding of white peoples’ mythologies and fantasies of the asian otherness as the model minority or femme-based sexual fetish. for example, robert aaron long, who was the perpetator for the march 16, 2021 atlanta area spa shootings targeting mostly asian women, had been dismissed by the police forces for committing a hate crime as a white male in rage on a typical bad day; the deliberate marginalization of asian women and their self-empowerment by policing institutions correlates with huang’s analysis of the asian femme body in the context of manifest destiny, white male patriarchy, and statist violence against the physical self as political experiment. of the work, huang states that “the work addresses state violence against the asian femme but the marginalized at large. and in the ways my body is codified, as harmless or subservient, as a manageable other, how that allows me to infiltrate these architectures of power in a way that an unmanageable other could not. and in a way, this is a sacrifice or risk taken to discern how biopolitical threat is constructed in the u.s.”

huang’s three part video epic white vegetable reflects a haunting analysis of the syncretic nature of chinese american culture with rituals that span mexicali, chinese cabbage, and deleuze’s concept of deterritorialization and reterritorialization within the acts of eating and food preparation. This series utilizes the imagery of layered vegetables as well as cinematic masks in circular format to suggest the multiplicity of anthropological views of asian american culture with its manifold variations rather than a monolithic set of cultural images and practices. the term “white” is imploded in terms of implicit race too; “white” vegetables suggest that race is an artificial construct which ignores varieties and hues in color theory in relation to racial political praxis.

the artist’s masterful usage of the 16mm film format demonstrates a profound understanding of a populist medium tinged with nostalgia. huang strips all of that away to show the power structure of anti-asian stereotyping and concomitant violence, particularly against femmes and queers/non-binary people. the viewers experiencesthe distressed nature of the film format itself with reddish haloes and scratches upon the film itself, like a brakhage + butler experiment. as foucault once said, “power is not an institution, and not a structure; neither is it a certain strength we are endowed with; it is the name that one attributes to a complex strategical situation in a particular society.” one can see that huang’s artistic strategies in cultural and performative gender (in the sense of butler’s concepts) are a brilliant method to disarm the alarmingly dangerous domination of white supremacy over the marginalized in various manifestations.

stephanie mei huang is a los angeles-based interdisciplinary artist. she uses a diverse range of media and strategies including film/video, installation, social interventions, sculpture, writing, and painting. through research and practice, she aims to erode the violent mythologies that perpetuate expansionist and exceptionalist narratives, in the hopes of excavating forgotten, erased, and partial histories. she yearns to locate sites of emergence from which we can perhaps fabulate new and adjacent histories. she recently completed her mfa in art at the california institute of the arts (2020), and she received her ba from scripps college (2016). she is a contributor to the contemporary art review los angeles. she has taught at non-profits such as the marfa studio of arts and venice arts. she most recently exhibited at the mak center for art and architecture, los angeles municipal art gallery, the new wight biennial at the university of california, cerritos gallery, the arizona state university art museum in tempe, and stamp gallery at the university of maryland. she will have solo exhibitions with 4th ward project space, chicago and hauser & wirth book and printed matter lab, los angeles in the coming year. she has been supported by the foundation for contemporary arts, j. paul getty trust, los angeles contemporary exhibitions, the getty foundation, the california community foundation, among others. she will be attending the whitney isp in the fall of 2021. huang is represented by office space.