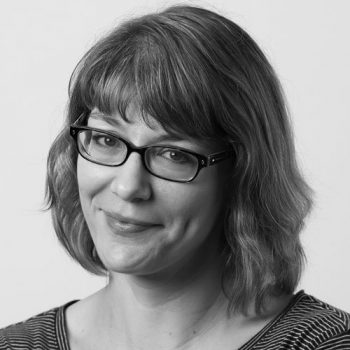 READ LOCAL First represents Utah’s most comprehensive collection of celebrated and promising writers of fiction, poetry, literary nonfiction, and memoir. This week we bring you Stefene Russell, a St. Louis-based poet, writer, editor and actor. She is a Salt Lake City native and graduate of the University of Utah where, she says, “I was lucky enough to study with Larry Levis, Jackie Osherow, and Donald Revell.”

Russell was Laumeier Sculpture Park’s 2018 poet-in-residence. Her works include Inferna (2013, Intagliata Press), The Possum Codex (2015, Otis Nebula), and 47 Incantatory Essays (Spartan Press, 2019) — from which we feature the following microfictions.

Find her online at stefenerussell.com.

Back in the day, it was easy for the son of a Prussian shepherd to make it big in the drug business. The business pages referred to him as C.F.G. Meyer, short for Christian Frederick Gottlieb, but everyone called him Fred. He sold his flock and came to America with 12 Prussian dollars in his pocket. He moved to Indiana and piloted a canal boat in Fort Wayne. One day, a man on the dock said to him, Here, bub, do you want a job? Fred nodded and the man took him to a drugstore, and told them here is a boy who wants something to do. Fred built the fire. Fred washed bottles. From time to time Fred pulverized gum aloes, euphorbium, cantharides and similar articles. Fred and his brother Bill pooled their dollars. Fred and his brother moved to St. Louis. Fred and Bill filed with the State of Missouri as Meyer & Brother, purveyors of mortars and pestles, sellers of Balsam of Peru, Elatarium, and Alum. Sellers of label-under-glass bottles and crutch tips.

Fred and Bill were killing it. Fred and Bill manufactured bottled drugs and Soul Kiss perfume. The brothers sold drugs but also valentines, gumdrops, lipsticks and julep straws. Bill and Fred invented the drugstore soda fountain. Fred built a mansion on Keokuk Street. Fred’s son Henry nearly destroyed the empire, returning from South Africa with 500 veterans of the Boer Wars, paying them out of the family fortune to relive their battles on the 1904 World’s Fair grounds. Close to Fred’s heart were his symbolic sons, the company sons. Close to Fred’s heart was Irish John from Chicago. Irish John who sold Meyers’ drugs while making saccharin in his bathtub.

Irish John who sold saccharin on the cheap and destroyed Germany’s monopoly. Irish John who invested in property along the North Riverfront. Irish John who founded a company named for his wife, Olga Mendez Monsanto. Irish John who undertook the manufacture of caffeine and aspirin. Fred’s warehouses stood packed full of John’s saccharine and aspirin. John and all the sales- men gathered on Keokuk one Christmas Eve to give Fred a grandfather’s clock. Fred at 72, thin-faced, wearing his pince-nez. Seated in his study, surrounded by his sons. The flames in the fireplace throwing shadows on the faces of men with their glossy hair and their whiskers. Shadows on the hides of zebras, springboks, and bears Henry shot in Johannesburg. The smell of pine pitch, the snapping of the fire. A mantle merry with holly and white tapers, but the feeling of death, of something pale and terminal, something invisible present. The vapors from good scotch dissolving into dry air, the convulsing smoke from pipes and cigars rising in the air like so much ectoplasm at a séance, like so much saccharin dissolving into coffee.

Madam Z., Mr. Z’s wife, read cards and palms at the Egyptian Tea Room. We went to the Egyptian Tea Room one cold night, a little after Christmas. I wore my new coat, my good coat, green and turquoise, shiny like a peacock’s body. I put on pink lipstick and little pearl earrings. I drank Turkish coffee, which seemed like a strange thing to drink at the Egyptian Tea Room. I went into the back room, through a doorway shrouded in beads and silver fabric, to get my fortune told. She turned over the cards and said, how strange, you see? All 8s. Eight like the lemniscate over the head of the Magician and the woman on the Strength card and the man at the edge of the seasick ocean, juggling two pentacles. Eight like the devil. Eight like the world. Saturn’s eights. That was the night the cops showed up. That was the night they broke the front glass door with their clubs and their boots and arrested us all, slapped cuffs on us for violating Section 625 of the Revised Code of 1914, the anti-soothsaying law. How biblical canyou get? Can a modern cop suffer a witch to live?Can a lady get a light around here? How can a lady get her bail met? Mrs. Z. came on WIL every week, took callers and pulled cards. She was on the air every week between Louie’s Hungry Five and the Palais d’Or Orchestra. She got bags and bags of fan mail. Mrs. Z. was in plain sight. Where were the cops? Why didn’t they bust her on the radio? Now Mrs. Z is in jail and the café is closed forever and all the debutantes carry on with their Fortune Teas at the St. Louis Women’s Club, casting horoscopes and reading palms and dressing in black velvet and head wraps and big gold necklaces and big gold earrings. The paper runs recipes for orange fortune cakes, like a fortune cookie but not as dry and crumbly and with a lot more icing. They run recipes for the ladies who throw teas and pull cards and trace the lines on palms and say you’re going to love that one, marry that one, break this other one’s heart. It’s OK for the fortunate to tell fortunes, for those who always get their say to soothsay. Me and the people I know, we shut our mouth and pose for the mugshot. Smoke and smoke and drink hope like a liquor, never able to stop putting our hearts on cards and palms and horses. We say we think those things in sky called stars are really bullet holes. We say Bingo is our name-o. We say that’s just the way it is when you are born under a burned-out star. We say that’s just the breaks. That’s just what happens when you’re born a crazy eight.

A long time ago every big city had another little city within it, built near train tracks or industrial waterways or dumps. It was where you went after you lost your job and your house, where you patched together shelter from scrap metal, driftwood, and pallets. You nailed flattened sardine cans over holes in the floor. You curled a sheet of rusty tin into a tipsy chimney that puffed smoke over a tar-paper roof. St. Louis’ ran a full mile along the Mississippi River, near the Municipal Bridge. It was so big, it spawned suburbs—Hoover Heights, Merryland, and Happyland, short for Happy Landing. Five thousand people lived there. Some of the buildings were so big, they soared two stories tall and had antebellumverandas. There was a scrap-metal church and an orange- crate church. People sent their kids to school, hung wash, angled for catfifsh and turtles, walked three blocks to the Welcome Inn, where they stood in line under the bridge for baskets of bruised turnips and stale bread. Chicago burned its Hooverville. New York sent demolition crews to Central Park. St. Louis sent a crew of WPA workers to tear down the Mississippi River shanties. In 1959, 47 families still lived in Parkerville, at the foot of Madison Street. At the foot of Madison Street, where the city of St. Louis decided to build its new municipal dock, and rallied the bulldozers. Parkerville, home to a woman who said, This is the only home I have ever owned. I’ve lived here for 21 years. I’m going to miss the flowers in my garden.Home to a man who said, I don’t want to be jammed up in one of those public housing projects. I wish I could move tothe country. Home to a woman who said, what shall I do with my antiques? I’m 80 years old and I’ve lived here for 28 years. What shall I do with my antiques? Home to Charles Keenan and his wife, who put plastic not glass in their windows. Who had ragged curtains. Whose sink had a worn veneer. Whose sink produced hot and cold running water. Who read the newspaper in a wallpapered room. Who laid down tile in the kitchen and the bathroom. Who brewed coffee. Who shook out salt and pepper on their dinner. Who sat at a kitchen table facing a kitchen window looking out on the river. Parkerville, where men and women sadly and silently contemplated their belong- ings, trying to decide what to take, what to leave behind, where to go. Parkerville where men and women stared bitterly at the condemnation signs tacked on their homesby the city. Parkerville. Which had its mayor, too. A mayor who told the reporters who showed up for the bulldozers, It’s unfair to make us move. But you can’t fight city hall.