A successful printmaker and key figure among local artists, Stefanie Dykes insists she doesn’t like to question appearances. Instead of digging in search of concealed causes, she prefers the commonsense approach: assume things are largely as they seem and try to see them clearly. That’s probably why her prints have always been characterized by close observation of surfaces. A Salt Lake street scene reveals sturdy houses made of bricks, each of which seems to have posed for its individual portrait. Whether it’s the hide of a rhino or the fleece of a sheep, she’s painstakingly carved its texture into her Baltic birch matrix to capture how it feels through how it looks. Her most characteristic subjects are the ornaments of pre-modernism: Gothic doorways, Baroque vases, plinths, pillars, bas-relief faces, all tied together by looping arabesques even as they divide and identify space. 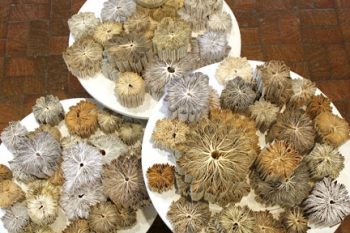 Two years ago, Dykes cut up her plywood, gave away her prints, and set off on a journey in response to a voice from within. For want of a more specific term, she called the object of her search ‘poetry.’ The poetic, as poets will tell you, is an often abused category, too often used to label something that falls short of being anything for certain. But after experimenting with materials like rust and techniques like collage, Dykes found a way to make objects that a poet could not fail to recognize, even as everyone struggles to remember just precisely what they are. How could we? Even though we recognize them as surely as we do the face in the mirror, we’ve never encountered them so exactly before.

This time, instead of respecting surfaces, Dykes has torn the covers off completely. Of books. And then cut them open, using a powerful shear, to reveal their interior structures in cross-section. At the moment when we are daily told that the codex—books of printed paper pages bound along one edge to be turned over as read—is about to disappear from the stage of history, the remembering, memorializing artist slices through their bodies, revealing an intimate anatomy. Then, working around the spine, the genius that holds it all together while simultaneously allowing immediate access to each part, she shapes the leaves into circles, ovals, ellipses, lunes, lenses, using varying numbers and lengths of pages to produce order and something more than mere allegories of program and process. Ultimately, the object she produces does in three dimensions what books have always done in our minds: divide and sub-divide space into quantities and according to qualities that make sense to us on a level deeper and more substantial than cerebral understanding. Growth, the passage of time, is part of it. What they do is touch and, for however long we can hold them in awareness, fill the empty place that each conscious entity feels in the center of being: the hole in the whole that aches for one thing that is perfect, or at least one experience . . . of perfection. 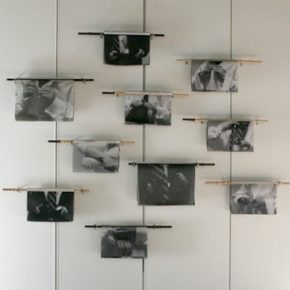 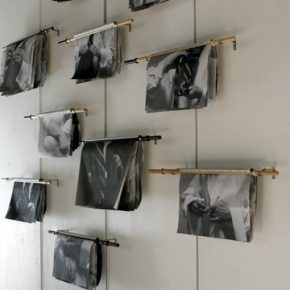 Stefanie Dykes’ Querl was at the Gittins Gallery June 17 – July 2.