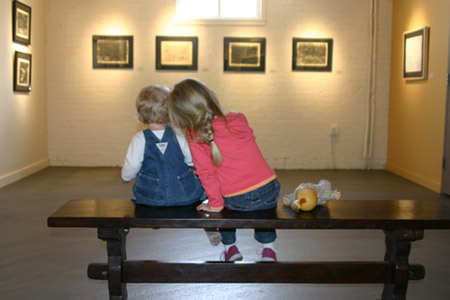 You’ve got to get ’em hooked early on. Here’s a photo of my two kids admiring the Veera Kasicharernvat exhibit at Acces II gallery. My oldest spent the better part of her first year in Chroma Gallery when the Artists of Utah office was in the back there. Nowadays she gets her art fix at Gallery Stroll, though for her the third Friday of the month is mostly about going from one place to the next eating treats. Not much different than the rest of us I imagine.

I was at Art Access taking this image for a promo for the Utah Cultural Alliance, of which Artists of Utah is a member. This is for their first 2007 Culture Bytes, a monthly series of panel discussions about culture and the arts in Utah. The first one of the season is Tuesday, May 1st, 11:30 at the Art Barn. The topic — attracting younger audiences. I used to have a beef with Culture Bytes because, well, obviously they’re riding on the nominal coat tails of our ezine. Which is okay, right. Just consider it an homage. But what really got me was that there were no “bytes” involved. Everything was all the flesh and blood, in-person sort of thing. No geeky techonology at all. That may be changing, though, as the UCA plans to start posting audio recordings of their Culture Bytes on their website. To learn about Culture Bytes go to http://www.utahculturalalliance.org/events.html