by Lisa B. Huber 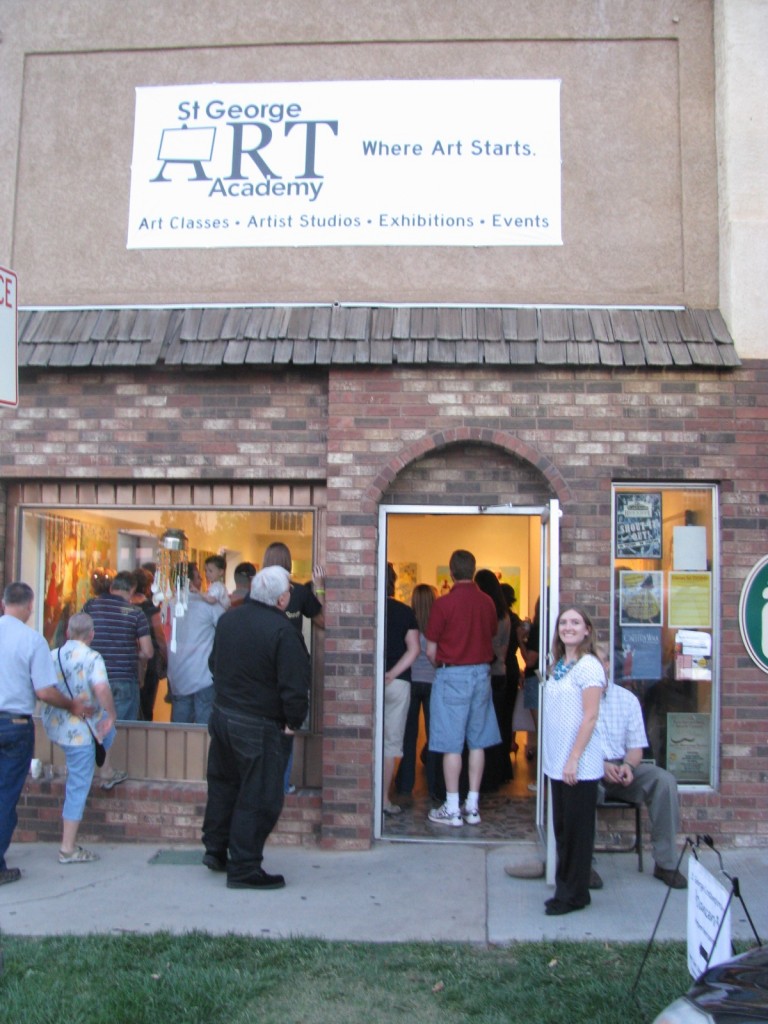 Alisha Tolman in front of the St. George Art Academy

Just over a year ago, the St. George Art Academy was a random list of wishes in the brains of two St. George natives, Alisha Tolman and Aimee Bonham. Both of these talented women hold Bachelor of Fine Arts degrees–Tolman, in drawing from Utah State University, and Bonham, from BYU, in painting and drawing — and after college and travel abroad –Bonham to Chicago and Tolman to Taiwan — both settled in their hometown. They met when both were featured artists in Kayenta a few years ago. Bonham invited Tolman to a critique group she was forming in Ivins. Discussions during those gatherings led them to share their ideas and formulate a plan. It struck each of them that there were artistic needs in their community that were not being met. Although St. George provides large support for the arts, they noticed it is limited to art forms and groups operating on the traditional side of the spectrum. They also noticed a lack of nurturing for artistic children. Their search for solutions to these problems is what created the St. George Art Academy.

Tolman threw herself into community affairs by proposing, organizing, advertising, and producing the first “Main Street Gallery Walk” in St. George. She rallied the Ancestor Square galleries, the St. George Art Museum, and other Main Street businesses, convincing them to stay open until after 9pm on a Friday night last October. With doors wide open, plenty of hors d’oeuvres, live music, and working artists in almost every venue, the streets came alive with folks who had previously spent their Friday nights anywhere else but downtown St. George. Subsequent “Walks” included punch cards marked at each venue. Completed cards were placed into a bowl at the last venue, and an original painting was given to the winner at the end of the evening.

It was after the first “Walk” that Tolman and Bonham began looking for a building to house their other ideas. Main Street seemed like a great central place and after looking at available properties, they settled on the business next door to the Bear Paw (a popular breakfast and lunch spot). Their new home had been an internet café, was carpeted, with low ceilings and “someone possibly living in it,” says Bonham. Initially “it didn’t look like much,” she says, but Tolman convinced her of the possibilities. “We did a lot of the work ourselves” Bonham says. “Alisha did the tile work and I did the base boards. We used our own money.” Friends chipped in with painting. Today it is a warm space with plenty of room for classes that teach “serious art versus crafts” for children, but also plenty of bright wall space for “installation” art, one-man emerging artist shows, “Presentation” art, and a small studio in the rear where Alisha is working on an upcoming show of her own work. 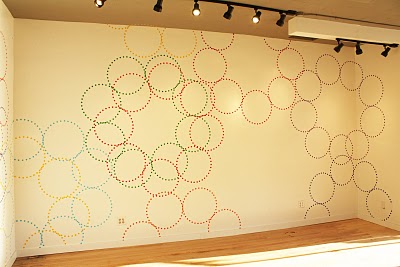 Since opening their doors, the St. George Art Academy has presented an installation by Corey Strange and an exhibition by California pop artist Daniel Arsenault’s Pop Art. In October Fiona Phillips’ “Glamorous Work” decked the walls,  and the academy will continue to host additional one-man shows through the fall and winter class schedules so that the young students learn respect for art as they practice the techniques on display around them. Teachers besides Tolman and Bonham include Kody Keller, Karl-Erik Bennion, Connie S. Thorkelson, and Kim Burnett. Although some of these teachers were recruited by Tolman and Bonham, others were drawn to the Academy by its promise of change.

Both Tolman and Bonham enjoy teaching the children’s classes, which include drawing, printmaking, oil painting, art history, and contemporary art forms. Bonham enjoys providing her youngest daughter with the opportunity to participate at the Academy, something she did not have as a child. Tolman says they have some very gifted children in these classes. “Some kids use drawing as a language of metaphor. This is what they like to do.” After a thoughtful pause she says, “I see myself in some of the children.” 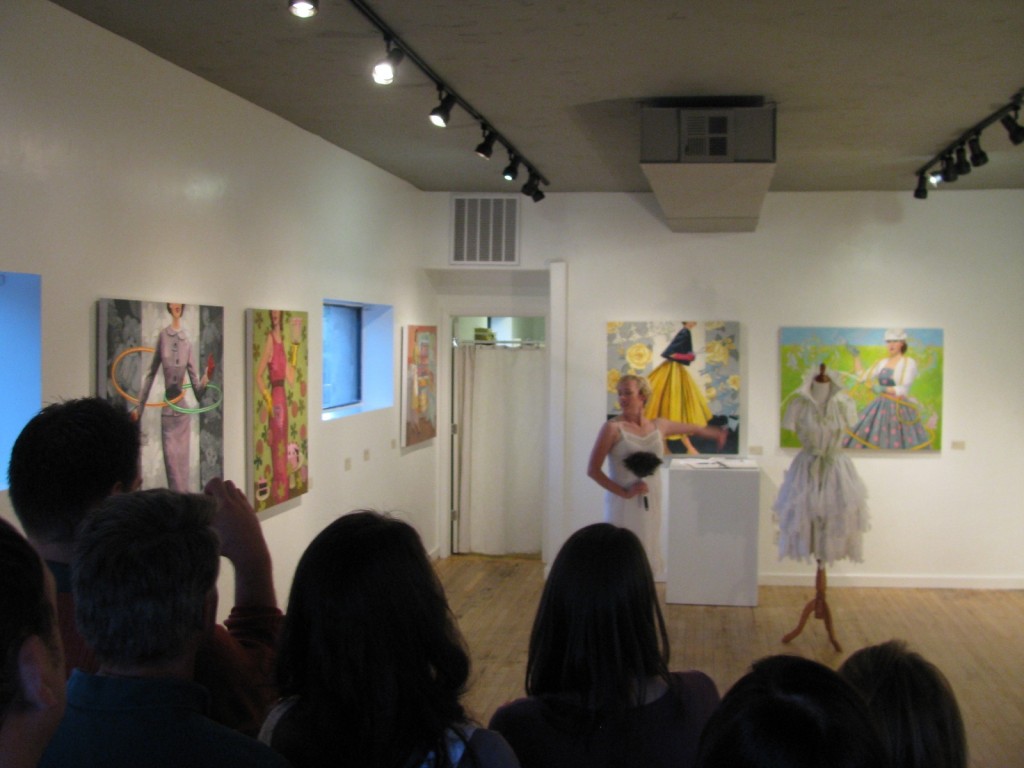 Like most new institutions time and money issues plague the Academy. Bonham says they are doing the work of about 15 people, including bringing in new exhibitions, hanging art, teaching, and marketing the programs. They both mention the lack of bodies “to keep the doors open.” The Academy is not yet registered as a non-profit, but it does have a fiscal sponsor–Fractured Atlas, a national non-profit artist service organization that provides support services for the independent arts community. All donations made to Fractured Atlas are channeled back to the St. George Art Academy. In addition to donations the Academy funds its programs with class tuition. Teachers other than Tolman and Bonham are paid based on enrollment numbers. Tolman and Bonham continue to put their income back into the Academy to help it evolve. “St. George has needed something like this for a long time. It might evolve a little bit as we refine the programs. Now that something like this is here, I don’t see it going away very soon. St. George is on the brink of an artistic awakening.”

Tolman and Bonham want to be sure their programming is available to all interested children so they are looking for methods to provide scholarships for children with limited means. They are organizing a street painting festival for April of 2011 in Kayenta, hoping sponsors will purchase sections of the street being painted by the artists, thereby funding the scholarships.

As if they were not busy enough already Tolman and Bonham continue to pursue their own individual careers. Both have work in the A Panel Of Women Present: Music For Your Eyes exhibit which opened recently at SUU’s Sears Gallery, which also features Cathie McCormick, Sunny Belliston Taylor, and LuAnn Williams. The Academy’s next exhibit, opening November 5th with a reception during the November Gallery Walk the following Friday, features work by Daniel Pettigrew.

The St. George Art Academy is located at 73 North Main in downtown St. George.
This article appeared in the November 2010 edition of 15 Bytes.