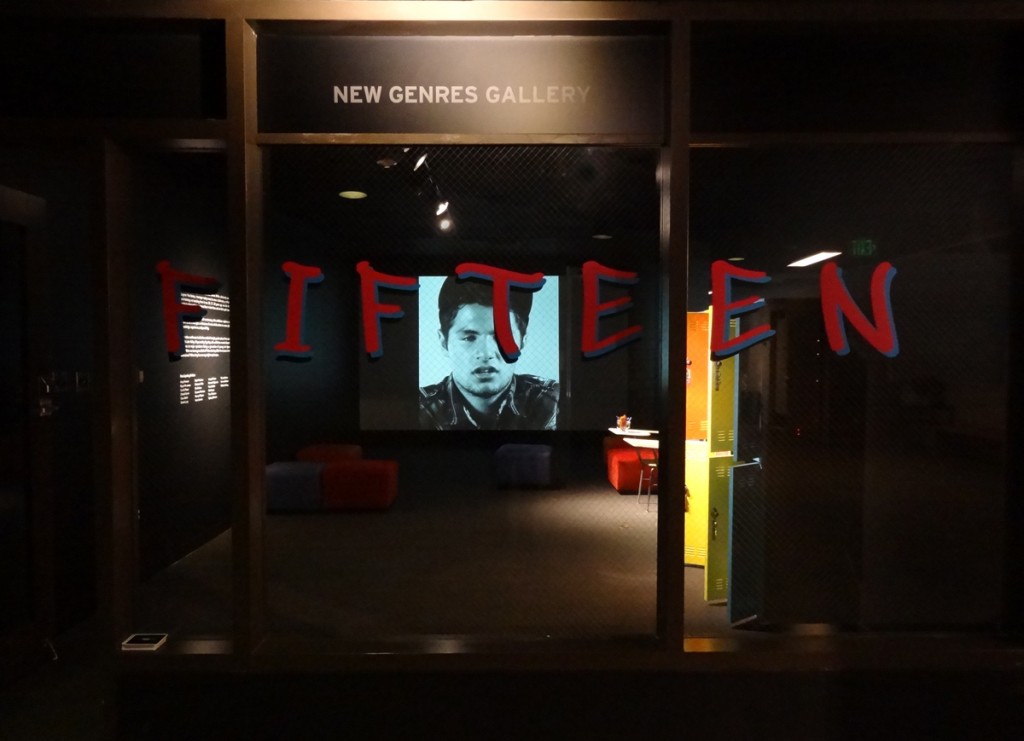 There’s an old rule-of-thumb in galleries, more applicable than ever these days: ‘The more text on the wall, the worse the art.’ Without an injection of extraneous text, much of today’s art would offer viewers little for their trouble. But the rule cuts both ways, and Fifteen, the latest Spy Hop installation at UMOCA, proves the opposite to be just as true. When the art speaks this well for itself, no explanation is needed. The pleasure of discovering and enjoying this work’s content is everywhere present, and the winning young women and men who gave of themselves to provide its raw materials speak to us as nearly as possible without censorship or mediation.

The New Genres Gallery, where Fifteen is installed, challenges artists and organizers; its glass end wall has a door on one side, which forces traffic along one side wall, while the long, narrow space can cause viewers to bump into each other while backing up to better see the art. Show cohesion is hard to create and sustain in what often feels more like a back alley. Fifteen makes a virtue of the architecture, beginning with the video all but covering the back wall, neatly framed by the mullions when seen through the glass from the hallway. Here’s an exhibit that could work as well at the mall as the museum. Inside, an installation of hall lockers, doors ajar and classic contents visible, makes the point that high school hasn’t really changed as much as today’s TV producers would have us believe. This is the age when most kids begin to leave home, in search of their own lives and families, and a locker may be the first room of ones own, however tenuously possessed. Art is supposed to be a dialogue, but here one locker makes that literally true, inviting viewers to write notes to their fifteen-year old selves and deposit them behind a clear wall, making them a visible, if confidential, part of the work.

Although this affective environment might well have been elaborated into a freestanding installation, it serves here as atmospheric for what is either a video collage or a filmed performance. Teens drawn from across the Salt Lake Valley appear, one at a time, looking forthrightly into the camera in close up, hopscotching across the wall in sequential dissolves. While we don’t hear the prompts, they respond by articulating on behalf of their generation. Their lucid self-expressions make this well-produced and presented video the centerpiece of Fifteen.

There was one thing that bothered me: not something the twenty-one teenagers did, but which seems to have been imposed by the Spy Hop producers, who provided the equipment, training, and supervision that made Fifteen possible. Why the mainstream media insistence of the artificial, if trendy, notion of generations? The admirably unobtrusive introduction to Fifteen includes this dubious justification:

. . . being a teenager today must be more challenging, confusing, overwhelming and exciting than it was 10, 15, 20 years ago.

It’s not ‘self-affirming’ to tell young men and women today that their lives are more complex than those of their great-grandparents, who came of age during the Great Depression, only to be drafted to fight World War 2, and did so at a time when ‘generation’ was a measure, not a label. This so-called ‘greatest generation’ didn’t get their flattering name until half a century later, when their major challenge was declining health and mortality. Nor do today’s high schoolers face more challenges than their grandparents, who lived through school desegregation and racial backlash, their parents, first to face designer drugs and eating disorders, or their older brethren, whose schools had to be locked down after their peers began shooting each other.

The point ought to be that every generation faces some problems that are new and unique, for which their elders can offer them no benefit of experience, but only the perspective that it does, most of the time, get better. And what is better about Fifteen is that advances in filmmaking equipment are matched by better infrastructure, in school and in the community. Kids who think about their identities may acquire some exaggerated notions, but they are unlikely to feel as isolated as the kid who shot up his Colorado high school as I was writing this. Nothing connects individuals better than art, especially when it is so well done.

Fifteen, presented by Spy Hop and featuring film and video works by youth from across the Salt Lake Valley, is at the Utah Museum of Contemporary Art through January 4.